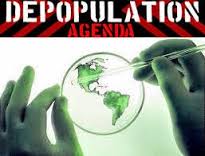 In previous articles, I have begun to detail how we can know that demonic entities, some call Fallen Angels are making their way into our reality. The contextual background for today’s part in this series, lie below with the following three articles.

Is This the Last Generation Humans? Major Revelations and Big Changes Lie Ahead

Why Was Ken Lay and Enron Taken Down by the Global Elite? I know, I Was There

In past articles I alluded to how Bill Pawelec, Vance Davis and myself were involved with Enron when they were taken down because they wanted to dabble in technology that is tremendous in its scope. However, certain entities are denying access, thus, we see the complete fabrication of our history and disguised depopulation events being put into play.

In a survey format, today’s article details how the globalists and their demonic allies have constructed a plot, consisting of at least six parts to this depopulation plan and how this plan will be implemented.

Fukushima: A Planetary Kill Shot of the Highest Order

Fukushima, which is far worse than most people realize has killed the Pacific Ocean.But it is not just the Pacific Ocean that we need to worry about. This is having a planetary effect because their life cycle between the health of the ocean (eg plankton, the interrelationship between weather, growing season, the food chain, etc.) have been permanently altered. This is leading to a food shortage and will culminate in massive bouts with starvation. The problem is getting far worse and will be covered later in this article as a depopulation event and will be covered in more detail in a future and related article.

The Gulf Oil Spill and the Destruction of Europe

The far-reaching effects of the Gulf Oil Spill. As I originally covered in my seven part series on the Gulf Oil Spill, the event was contrived and was designed to produce a slower, but ultimately, just as deadly set of planetary effects as Fukushima. As I have covered through both the NOAA data and the not so subtle pronouncements of the globalists, Europe is in trouble and eventually, Europeans will have to migrate to Africa to survive, only, as I have learned, viruses such as Ebola will be unleashed at an opportune time to kill off European migrants. I was told about this in confidence by a Russian official approximately 12 years ago. This is one of the reasons why Putin has adopted a defensive and hostile demeanor toward the globalists. This is something that I will greatly expand on in a future article as I will be discussing how the Gulf Stream has been permanently altered by the Gulf Oil Spill.

GMO’s and the destruction of our collective DNA is an absolute goal of the globalists. Yes, I am saying that humans are being terraformed. GMO’s are one of the precursorx to Transhumanism and the permanent alteration of the human species as it can be said that human DNA is being morphed through the food supply in order to bring about permanent changes which will set the stage for destroying human beings as we now know the species.

Although GMO manipulation of Human DNA is the not the focus of this article, it should be mentioned that Vance Davis had much to say about this in an early 1990’s book, Unbroken Promises.

Upon my first and ultimate meeting with Vance Davis, he told me that his NSA training consisted of a remarkable history lesson. He was taught by his NSA handlers that the Universe was involved in a classic struggle between what we would call good and evil. The evil (ie Fallen Angels in today’s lexicon) had a goal which was to destroy the soul of humans. The soul has always been considered one of the ultimate creations of God. Destroying the soul would have been considered to be one of the ultimate slaps in the face to God. However, the evil entities could not crack the code of the soul and as it turned out, only God has the code.  Subsequently, Vance was taught that the decision was made to permanently alter human beings through Transhumanism. When I first met Vance in 1993, he was already talking about, what we call today, Transhumanism. It should be noted here that as long as one human being survives intact, the soul also survives. Therefore, complete genocide against all humans in their present form is the goal of the globalists.

Along with consumables such as GMO’s I would also place vaccine danger.

The Last Generation of Humans

Transhumanism is the ultimate goal. I attended the Gen Six Branson conference on this topic. Transhumanism is designed to make this generation, the last generation of humans as know them.  I cannot elaborate any more eloquently that the guests that made public presentation in Branson in September of 2018.

In September of 2019, the relationship between these entities and world events will be unveiled at the next Legends Conference. Ticket information is available here.

Chemtrails and Dimming the Sun

Chemtrails are largely responsible for the explosion in such debilitating illnesses such as Dementia and Alzheimer’s. A full 18% of the Earth’s sunlight is not being blocked from reaching the planet. Now, as I have recently covered, the globalists have a new plan, it is called the “Dimming the sun”, though the dispersion of chemical particles in the Stratosphere, in which the globalists admit that Chemtrails are real and the strategy is designed to block sunlight from reaching the earth and will limit crop yield. This, too, will lead to mass starvation events.