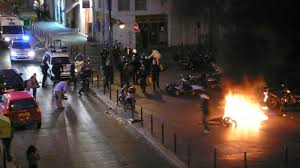 As we all know, President Trump ordered the American military to the border to oppose the dangerous and unlawful entry of unknown migrants into the United States. We know that a certain percentage of would-be border crashers are from such terrorist groups as MS-13, ISIS and the Muslim Brotherhood. All three groups have indiscriminately murdered people from the West without provocation. All three groups have professed a desire to destroy the American government all people who reside in the country. We know that they use innocent women and children migrants to shield these cowardly thugs from the lawful retaliation of the Border Patrol and the American military.

Subsequently, 45 UN workers were placed on the ground with the group of Central Americans as the United Nations assisted foreigners in their violations of the American immigration laws. This was an egregious violation of US sovereignty by the UN.

Additionally, the United Nations issued a stand down order to President Trump as the organization ordered the admission of all migrants wanting to come to America. And when Trump’s forces had to resort to minimum force to repel the would-be border crashers for throwing rocks at the Border Patrol, all hell broke lose internationally. All of the MSM including the New York Times  and their allies at the United Nations

The MSM fails to consider the fact that more than 1.5 million foreign refugees have been resettled in in various locations all across the country. Further,  there have been more than 4.1 million legal immigrants admitted to the U.S. from knownrefugee-producing countries since 2000. America needs immigrants. Americans honor the immigration process. However, Trump is not going to allow foreign entities, such as the UN migration council to make a mockery of US law..

Where Are the Globalist Sympathizers When the Shoe Is On the Other Foot?

The riots in France are  not being accurately covered in the MSM.  The French are actively resisting globalism. They are not just protesting the climate change fuel tax, that has been repealed by the French government. The French protesters are being violently assailed by forces friendly to the globalists. We Are Change traveled to France and documented  the following:

When the globalists are trying to preserve their NWO agenda, there are no holds barred when it comes to the use of force. However, when America tries to defend its borders, in opposition to globalist desires, President Trump is cast in the role of a war criminal who has committed crimes against humanity.