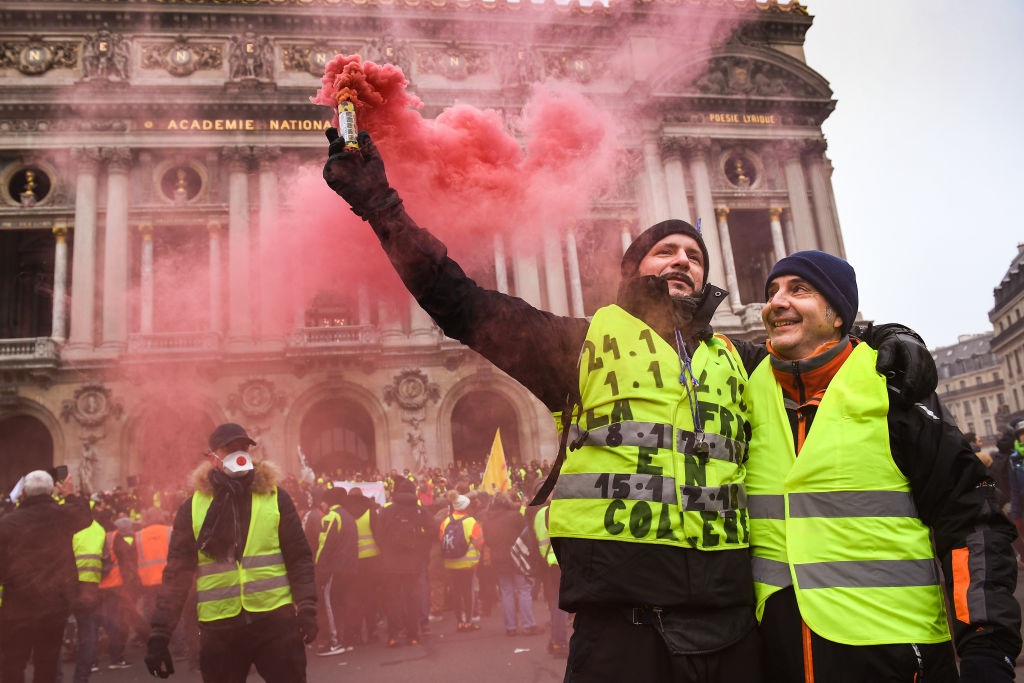 Normally, this time of the year, the Champs-Élysées avenue in Paris has a festive air with Christmas decorations and happy shoppers looking for last minute presents. This season, however, what the French like to boast about as “the most beautiful avenue in the world” looks more like a war zone. The reason is the phenomenon labeled “les gilets jaunes” or “yellow vests”, a movement that started as a protest against an increase in the price of diesel and quickly galumphed towards an all-out attack on the French political system.

At first glance one might say: we have been there, done that and bought the T-shirt!

Setting fire to parked cars and city dustbins, shattering shop windows and looting stores are old tactics of French protest movements, as witnessed on numerous occasions, most recently 2003 and 2005.

However, the current uprising, now in its sixth week, is different from previous protests for a number of reasons.

The first is that the “yellow vests” started not in Paris but in the provinces. That in itself is quite new. Ever since it emerged as nation-state in the 14th century, France has always been a Paris-centered polity. The great revolution of 1789 started in the capital, as did its miniaturized successors in 1830 and 1848. The Paris Commune of 1871 was, as its name indicates, also a Parisian affair. The protests that led to the emergence of the Popular Front in 1936 was also the work of Parisian elites. Finally, the last great French insurrection, known as the May 1968 revolution, was also centered on the capital.

The second difference is that, unlike previous revolutionary and/or insurrectionary episodes, the “yellow vests” movement, mobilizing around 130,000 activists in 11 cities throughout the nation, has an unexpectedly small socio-political base, a fact camouflaged by the energy devoted to destructive activities. Because of its basically provincial persona, the movement reminds one of the old French tradition of rural revolts known as “jacqueries”, first launched in 1380, in which poor peasants cast themselves as bandits to fight, and rob, their feudal barons.

Like historical “jacqueries,” the current “yellow vest” campaign is capable of inflicting much economic damage but is unable to offer an alternative vision of society.

The third difference is that it comes in the context of a society in which, for the first time in history, a majority of people could be regarded as privileged, at least in relative terms.

A nation that had lived through almost four centuries of intermittent wars, including two world wars and half a dozen colonial wars, has been at peace for an unprecedented six decades. France today is one of the richest nations in the world with perhaps the most generous welfare system anywhere. It has the world’s shortest work week, longest annual holidays, earliest retirement age, and some of the best education and health facilities in history. The French today are better fed, better housed, better clothed and better entertained than any time in their history. They are also in better health and live a staggering 20 years longer than they did at the start of their Fifth Republic.

Also worth noting is that France is perhaps the only country in the world where scores of small and medium-sized towns and cities have virtually all the facilities of a modern metropolis. Yet, opinion polls show that almost two-thirds of the French have some sympathy with the “yellow vests”.

What is the cause of this paradoxical situation?

Some analysts have tried to explain things with reference to modern information technology. The “yellow vests” have organized themselves with smartphones via Facebook and Twitter accounts, we are told. But why should that make a difference? The great revolution of 1789 was fed with pamphlets, at the time the equivalent of pontification on Facebook. In 1968, leaflets and placards were used instead of pamphlets.

One may dismiss the “yellow vest” episode as nothing more than the latest manifestation of the French penchant for street protests and dislike for institutional politics, including the system of representative democracy. “The French just like to riot,” one analyst quips.

Other analysts see the protest as an insurrection against Emmanuel Macron’s presidency. Maybe.

But, leaving aside the looters, the extreme right gangs such as Black Blocs, leftist groups of anarchists and the professional “smashers” (les casseurs in French), the events of the past five weeks have appealed to wide sections of French society. Macron is designated as the target because he happens to be the president. And one of the unwritten functions of the president in the Fifth Republic is to act as a political punching bag. Macron himself is a product of the same energy, albeit in a non-violent version, that has produced the “yellow vests”.

Some analysts see the virtual collapse of all traditional political parties as the reason for France sliding towards politics of revolt. Still others point to the reduction in the powers of national governments to devise and apply policies. Hampered by networks of shared sovereignty, notably the European Union, national governments have seen their margin of maneuver narrow down in the fields of economic, social, defense and foreign policies.

My own unorthodox, and certainly unscientific, diagnosis is that the French, like most other people in rich countries, are simply bored, with a lot of time on their hands and little exciting to do. Tens of thousands of people have already reached the peak of Everest, not to mention the dwarfish Mont Blanc which is as busy as Champs-Élysées at rush hour. Thousands go around the world in boat races. Each year, thousands publish novels and/or make movies. And everyone can be sure of getting his or her 15 minutes of fame on TV or, if not, at least Facebook and Twitter.

Schopenhauer recognized the threat of boredom to Western civilization more than a century ago. At least since the Industrial Revolution, Western civilization has aimed at the creation of an affluent society in which people did less work, consumed more and lived longer in peace. Boredom would be the by-product of such a society.