Those of us who closely follow the credit cycle should not be surprised by the current slide in equity markets. It was going to happen anyway. The timing had recently become apparent as well, and in early August I was able to write the following:

“The timing for the onset of the credit crisis looks like being any time from during the last quarter of 2018, only a few months away, to no later than mid-2019.” [i]

The crisis is arriving on cue and can be expected to evolve into something far nastier in the coming months. Corporate bond markets have seized up, giving us a signal it has indeed arrived. It is now time to consider how the credit crisis is likely to develop. It involves some guesswork, so we cannot do this with precision, but we can extrapolate from known basics to support some important conclusions.

If it was only down to America without further feed-back loops, we can now suggest the following developments are likely for the US economy. Warnings about an economic slowdown are persuading the Fed to soften monetary policy, a process recently set in motion and foreshadowed by US Treasury yields backing off. However, price inflation, which is being temporarily suppressed by falling oil prices, will probably begin to increase from Q2 in 2019. This is due to a combination of the legacy of earlier monetary expansion, and the consequences of President Trump’s tariffs on consumer prices.

After a brief pause, induced mainly by the threat of an unstoppable collapse in equity prices, the Fed will be forced to continue to raise interest rates to counter price inflation pressures, which will take the rise in the heavily suppressed CPI towards and then through 4%, probably by mid-year. The recent seizure in commercial bond markets and the withdrawal of bank lending for working capital purposes sets in motion a classic unwinding of malinvestments. Unemployment begins to rise sharply, and consumer confidence goes into reverse.

Equity prices continue to fall, as liquidity is drained from financial markets by worried investors, but price inflation remains stubbornly high. Consequently, bond prices continue to weaken under a lethal combination of foreign-owned dollars being sold, increasing budget deficits, and falling investor confidence in the future purchasing power of the dollar.

The US enters a severe recession, which is similar in character to the 1930-33 period. The notable difference is in an unbacked pure fiat dollar, which being comprised of swollen deposits[ii] (currently 67% of GDP versus 36% in 2007), triggers an attempted reversal of deposit accumulation. The purchasing power of the dollar declines, not least because over $4 trillion of these deposits are owned by foreigners through correspondent banks.

One bit of good news is the US banking system is better capitalised than during the last crisis and is unlikely to be taken by surprise as much it was by the Lehman crisis. Consequently, US banks are likely act more promptly and decisively to protect their capital, driving the non-financial economy into a slump more rapidly by calling in loans. Price inflation will not subside, because that requires sufficient contraction of credit to offset the declining preference for holding money relative to goods. Any credit contraction will be discouraged by the Fed, seeking to avert a deepening slump by following established monetary remedies.

The Fed’s room for manoeuvre will be severely restricted by rising price inflation, which it can only combat with higher interest rates. Higher interest rates will become a debt trap springing tightly shut on government finances, forcing the Fed to buy US Treasuries under cover of monetary stimulation. The true reason for QE will be that with a rapidly escalating budget deficit exceeding $1.5 trillion and more, the Fed will want to suppress borrowing costs compared with what the market will demand. Economic conditions will be diagnosed as a severe case of stagflation. In reality, the US will be ensnared in a debt trap from which the line of least resistance will be accelerating monetary inflation.

It will prove difficult for neo-Keynesian central bankers to understand the seeming contradiction that an economy can suffer a slump and escalating price inflation at the same time. It is, however, the condition of all monetary inflations and hyperinflations suffered by economies with unbacked fiat currencies. The choice will be to rewrite the textbooks, discarding current groupthink, or to soldier on. We can be certain the neo-Keynesians will soldier on, because they are intellectually unable to reform existing monetary policy in a manner acceptable to them.

That would be the likely outcome of the developing credit crisis if it wasn’t for external factors. There is precedent for it, and we can expect it from a purely theoretical analysis. It would be a rolling crisis, becoming progressively worse, taking six months to a year to unfold, followed by a period of economic recovery. But there is a major snag with this analysis for the US economy, and that is US monetary policy has long been coordinated with the monetary policies of other major central banks through forums such as the Bank for International settlements, G20 and G7 meetings.

The surprise election of President Trump upset this apple-cart with his untimely budget stimulus and the havoc he is wreaking on international trade. The result is the Fed is no longer on the same page as the other major central banks, particularly the Bank of Japan and the European Central Bank. Therefore, unlike crisis phases of previous credit cycles, the Eurozone enters it with negative interest rates, as does Japan, which are creating enormous currency and banking tensions. We will put Japan to one side in our search for knock-on systemic and economic effects triggered by the Fed’s increase in interest rates, and instead focus on the Eurozone, the heart of the European Union.

The Eurozone is irretrievably bust

It is easy to conclude the EU, and the Eurozone in particular, is a financial and systemic time-bomb waiting to happen. Most commentary has focused on problems that are routinely patched over, such as Greece, Italy, or the impending rescue of Deutsche Bank. This is a mistake. The European Central bank and the EU machine are adept in dealing with issues of this sort, mostly by brazening them out, while buying everything off. As Mario Draghi famously said, whatever it takes.

There is a precondition for this legerdemain to work. Money must continue to flow into the financial system faster than the demand for it expands, because the maintenance of asset values is the key. And the ECB has done just that, with negative deposit rates and its €2.5 trillion Asset Purchase Programme. That programme ends this month, making it the likely turning point, whereby it all starts to go wrong.

Most of the ECB’s money has been spent on government bonds for a secondary reason, and that is to ensure Eurozone governments remain in the euro-system. Profligate politicians in the Mediterranean nations are soon disabused of their desires to return to their old currencies. Just imagine the interest rates the Italians would have to pay in lira on their €2.85 trillion of government debt, given a private sector GDP tax base of only €840bn, just one third of that government debt.

It never takes newly-elected Italian politicians long to understand why they must remain in the euro system, and that the ECB will guarantee to keep interest rates significantly lower than they would otherwise be. Yet the ECB is now giving up its asset purchases, so won’t be buying Italian debt or any other for that matter. The rigging of the Eurozone’s sovereign debt market is at a turning point. The ending of this source of finance for the PIGS[iii] is a very serious matter indeed.

A side effect of the ECB’s asset purchase programme has been the reduction of Eurozone bank lending to the private sector, which has been crowded out by the focus on government debt. This is illustrated in the following chart. 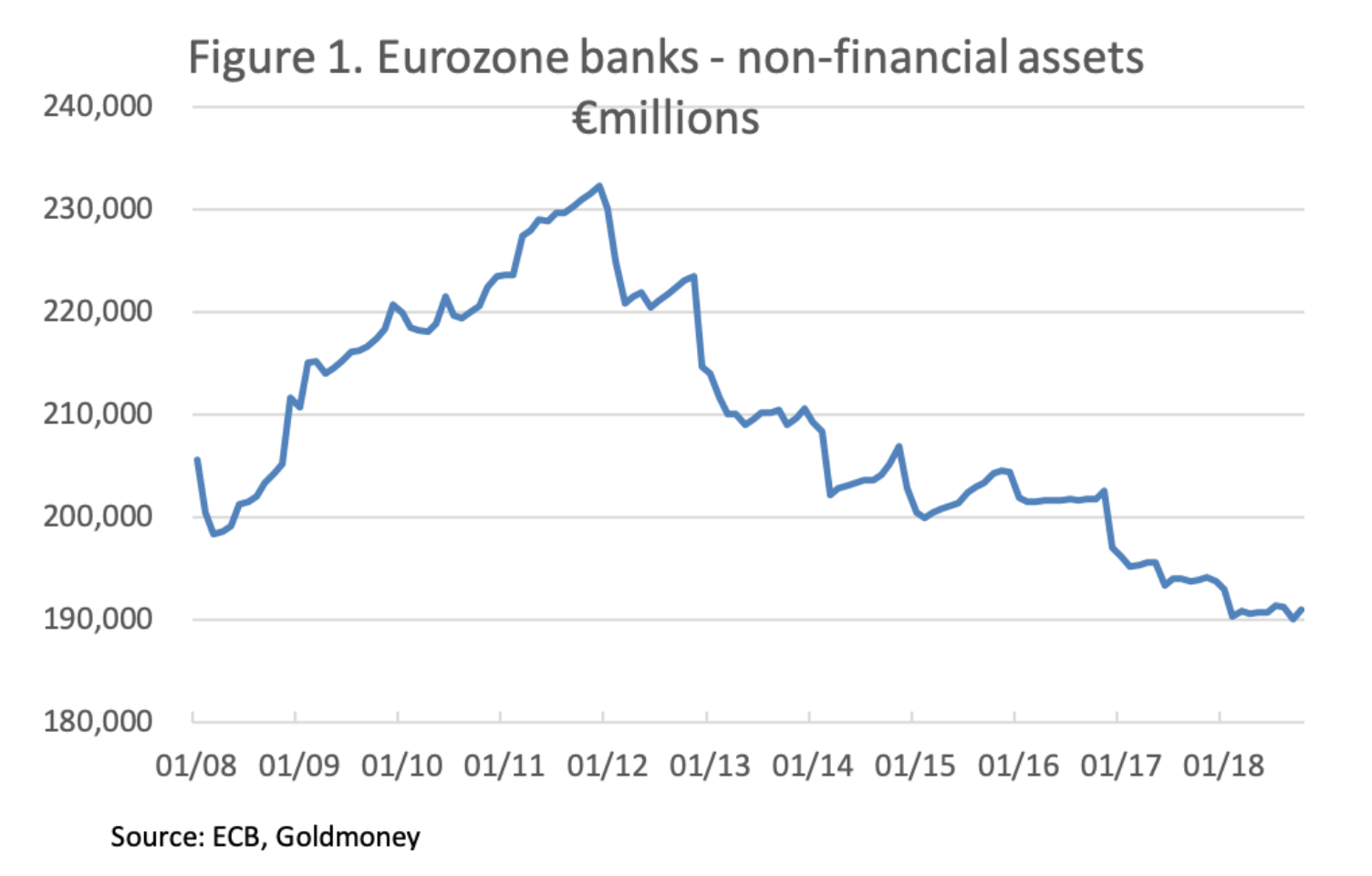 Following the Lehman crisis, the banks were forced to increase their lending to private sector companies, whose cash flow had taken a bad hit. Early in 2012 this began to reverse, and today total non-financial bank assets are even lower than they were in the aftermath of the Lehman crisis. Regulatory pressure is a large part of the reason for this trend, because under the EU’s version of the Basel Committee rules, government debt in euros does not require a risk weighting, while commercial debt does.[iv] So our first danger sign is the Eurozone banking system has ensured that banks load up on government debt at the expense of non-financial commercial borrowers.