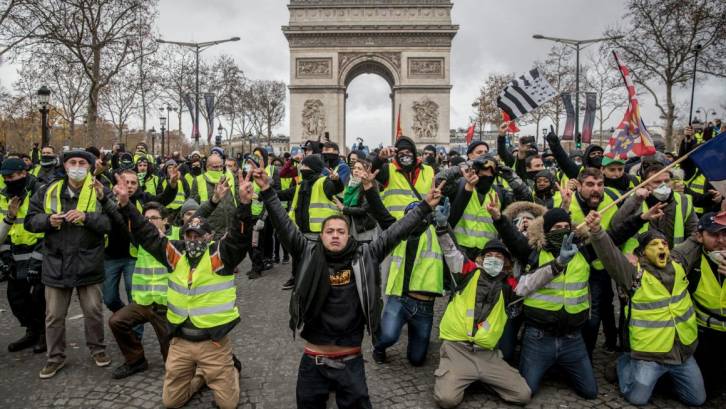 The emptiest, dumbest platitude of our time, uttered both by establishment stiffs like the Archbishop of Canterbury and by self-styled radical leftists, is that the 1930s have made a comeback. Treating that dark decade as if it were a sentient force, a still-extant thing, observers from both the worried bourgeoisie and the edgy left insist the Thirties have staggered back to life and have much of the West in their reanimated deathly grip. Looking at Brexit, the European turn against social democracy, the rise of populist parties, and the spread of ‘yellow vest’ revolts, the opinion-forming set sees fascism everywhere, rising zombie-like from its grave, laying to waste the progressive gains of recent decades.

This analysis is about as wrong as an analysis can be. Comparing contemporary political life to events of the past is always an imperfect way of understanding where politics is at. But if we really must search for echoes of today in the past, then it isn’t the 1930s that our era looks and feels like – it’s the 1840s. In particular 1848. That is the year when peoples across Europe revolted for radical political change, starting in France and spreading to Sweden, Denmark, the German states, the Italian states, the Habsburg Empire, and elsewhere. They were democratic revolutions, demanding the establishment or improvement of parliamentary democracy, freedom of the press, the removal of old monarchical structures and their replacement by independent nation states or republics. 1848 is often referred to as the Spring of Nations.

Sound familiar? Of course 2018 has not been as tumultuous as 1848 was. There have been ballot-box protests and street-based revolts but no attempts at actual revolutions. And yet our era also feels like a Spring of Nations. In Europe especially. There are now millions of people across Europe who want to re-establish the ideals of nationhood, of national sovereignty and popular democracy, against what we might view as the neo-monarchical structures of 21st-century technocracy. The sustained gilets jaunes revolts in France capture this well. Here we have an increasingly monarchical ruler – the aloof, self-styled Jupiterian presidency of Emmanuel Macron – being challenged week in, week out by people who want greater say and greater national independence. ‘Macron = Louis 16’, said graffiti in the gilets jaunes-ruled streets during one of their revolts. And we know what happened to him (though in 1793, of course, not 1848).

France’s February Revolution of 1848 – which brought to an end the constitutional monarchy that had been established in 1830 and led to the creation of the Second Republic – was one of the key igniters of the people’s spring that spread through Europe in 1848. Today, likewise, the gilets jaunes revolts have spread. In recent weeks yellow-vest protesters in Belgium have tried to storm the European Commission – an unprecedented event, which got strikingly little media coverage – while yellow vests in the Netherlands have called for a referendum on EU membership and in Italy they have gathered to express support for their Eurosceptic government. That election in Italy was a key event of 2018. Coming in March, it brought to power the League and the Five Star Movement, parties loathed by the EU establishment, and in the process it shattered the delusions that had gripped many European observers following the election of Macron last year – that Macron’s victory represented the fading-away of the populist moment. Italy disproved that, French revolters confirmed it, and local and national elections everywhere from Germany to Sweden added further weight to the fact that the populist revolt is not going away anytime soon.

When you’re in the thick of something, when you’re reading daily reports about the elite’s war on Brexit and seeing tweeted photos of Paris burning and watching as the EU declares political war on the elected government of Italy, it can be hard to appreciate the historic nature of what is going on. Or just the magnitude of it. We all get so bogged down in the ins and outs of the Brexit ‘negotiations’ (in truth there is no real negotiation, but rather mild disagreements between the UK and EU establishments over how Brexit might be most smoothly killed off). We pore over graphs showing the collapse in public support for the old mainstream parties, especially social-democratic ones. We express surprise at the corrosion of consensus politics even in Sweden, that traditionally most consensual of countries. But it can be hard to piece things together and create a bigger picture. We should try to, though, because then we might see that ours really is an era of revolt, of chaos even – but welcome, good, fruitful chaos.

What we have, across Europe, is people calling into question the prevailing political, moral and cultural order. These are not mere economic revolts, even in France, where economic issues have certainly been in the mix. Leftist observers, when they can bring themselves to confront the revolting moment, have tried to reduce the populist uprising to a cry for help by the ‘left behind’ or the ‘economically vulnerable’. The vote for Brexit was really caused by people’s sense of economic insecurity, they claim. Such analysis demeans the populist revolt; it empties it of its genuinely radical character, of its conscious challenge not only to the neoliberalism that is central to the EU project but far more importantly to the cultural norms and political practices of the new elites in 21st-century Europe. To say ‘These people are poor and that’s why they’re angry’ is to rob these people of their radical agency.

In a sense, 2018 is less like 1848 itself and more like the decades that preceded that tumultuous year. These were, in the words of Trygve Tholfsen in his 1977 study of working-class radicalism in the run-up to 1848, ‘hungry decades’ – decades in which disgruntlement and radicalism bristled and grew before exploding in firm demands for change. And though many people were alarmingly poor in these ‘hungry decades’, it wasn’t their ‘immediate deprivation’ that drove them to organise and take action, says Tholfsen; rather, their instinct for revolt was built on ‘solid intellectual foundations’ and it expressed a ‘denial of the legitimacy of the social and political order’. We have something similar today. Yes, Macron’s fuel tax hit people’s pockets; yes, many Brexit voters are less well-off than the Remainer elites; yes, Eurosceptic Italian youths struggle to find work. But their revolts, whether at the ballot box or on the streets, are energised by more than ‘immediate deprivation’ – they are built upon a denial of the legitimacy of the existing political and cultural order.

Brexit captured this: a mass vote in defiance of the political and expert classes who insisted that Euro-technocracy was the only realistic way to organise a continent as large and complicated as Europe. We said no to that. We called into question the legitimacy of this political orthodoxy. France captures it, too. There we have the emergence of a new countercultural movement, though the culture being countered by the gilets jaunes is the culture of the new elites, of the post-1968 generation itself, in fact. The new culture of ideological multiculturalism, technocratic governance, anti-nation-state elitism, environmental diktats – that is what is being countered now, and consciously so, by French revolters. Some even carried placards calling for the creation of a Sixth Republic: an explicit confrontation of the highly centralised, parliament-weakening style of governance of the Fifth Republic, and of the EU too, of course.