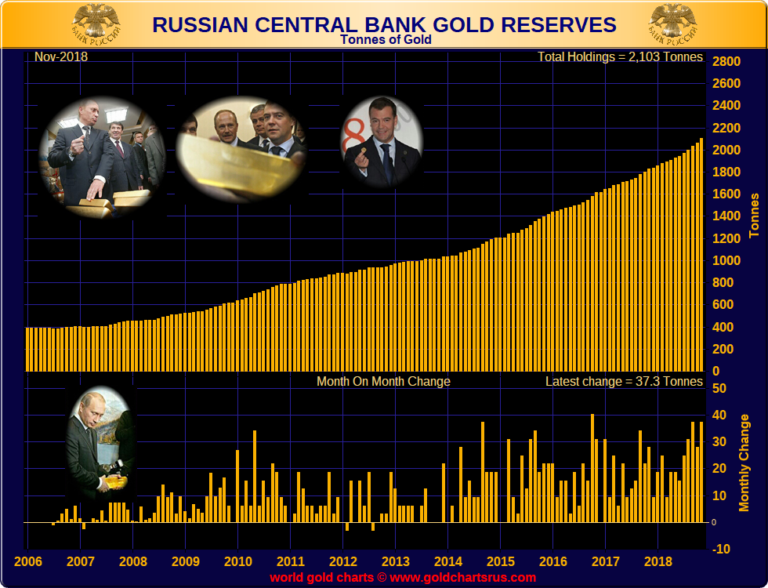 For a number of years now and even more so during 2018, the central bank of the Russian Federation, the Bank of Russia, has remained in the spotlight as one of the world’s largest gold buyers, each month adding substantial amounts of gold to its monetary gold stockpiles.

Having bought another 37.3 tonnes of gold (1.2 million ounces) during November, and Bank of Russia now holds 2103 tonnes of monetary gold. On a year-to-date basis (for the 11 months from January to November 2018), the Russian central bank has added an incredible 264.3 tonnes of gold to its monetary reserve assets.

A key feature of the Russian gold market is that the Bank of Russia has a policy of sourcing its gold from domestic gold mining companies by using large Russian commercial banks such as Sberbank and VTB Bank as intermediaries.

The commercial banks finance the gold mining producers with development credits and loans. The miners then repay the banks with the gold they mine. After the gold is sent for refining to Russian gold refineries, the large commercial banks sell the refined gold (in bar form) to the central bank, which in turn stores the gold bars in the Bank of Russia’s storage vaults in Moscow and St Petersburg. Sounds simple in theory and even in practice. But this model only works smoothly as long as gold demand from the central bank is less than domestic gold mine supply. When demand is greater than supply, the marginal gold demand has to be sourced elsewhere.

All the mined gold and then some

Having accumulated a then record 223 tonnes of gold in 2017, the 264.3 tonnes of gold so far bought by the Russian central bank during 2018 (to the end of November) has already smashed last year’s record. But while domestic gold mining production in 2017 was sufficiently large to meet Bank of Russia gold demand that year, in 2018 it is not.

According to the Russian Finance Ministry, the Russian economy produced 253.9 tonnes of gold from mined gold output in 2017 (with another 53 tonnes being sourced from gold scrap production and bi-product gold output, for a total of 306.9 tonnes).

More recently for the first 9 months of 2018, the Finance Ministry says that Russia produced 231.65 tonnes of gold, of which mined gold output comprised 194.86 tonnes, and gold scrap and by-product gold output adding another 36.79 tonnes. Annualizing the 9 month figure for mined gold output would imply a full year mined output figure in the region of 260 tonnes, i.e. less than the 264.3 tonnes of gold already bought by the Russian central bank so far during 2018.

December gold purchases (if indeed there were any any) also need to be added into the central bank’s full year buying total. In December 2017, the Russian central bank did buy some gold, to the tune of 300,000 ozs (9.33 tonnes), however it did not report any gold buying in December 2016. Therefore, a precedent for Bank of Russia gold buying during the month of December remains unclear.

But the 2018 supply-demand figures as they stand beg the question as to whether the Russian central bank is now indirectly tapping into gold scrap and by-product gold output, or more interestingly whether some of the gold bars ending up in the Bank of Russia vaults are now coming from international markets.

The main Russian commercial bank players sourcing gold mine supply for the Russian central bank include VTB, Sberbank, Otkritie, and Gazprom Bank. For example, in 2017, Russia’s largest gold mining company Polyus, sold 90% of its gold output to just three banks, VTB, Otkritie and Sberbank, and another few percent of output to Gazprom Bank. These banks are mostly government owned or controlled and are granted licenses by the Russian government to allow them to trade gold with the central bank.

Sberbank’s international gold trading activities are conducted through its investment banking subsidiary Sberbank CIB (which was formerly Troika Dialog). As well as purchasing gold from Russian gold miners which mostly goes to the central bank, Sberbank CIB sells refined gold bars to the physical gold powerhouses of China and India. According to Reuters, for 2018, Sberbank had planned to sell 25-30 tonnes of gold to India, at least 20 tonnes to China, and was planning to buy 100 tonnes in the Russian market. Sberbank’s trading on the Shanghai Gold Exchange is conducted by its Swiss unit Sberbank (Switzerland) AG which is also the same unit that buys gold in the international markets including in Switzerland. Sberbank CIB also maintains offices in London and New York.

The Swiss unit is also one of Sberbank’s two commodity hubs. As it explained in 2016:

“Sberbank CIB is establishing a commodity hub in Western Europe to complement and support its existing centre of precious metal trading in Moscow. This hub will have a strong focus on international physical deliveries of metal, financing of physical commodities routes throughout the globe and risk management solutions. This two-hub strategy will offer significant flexibility to Sberbank Group and will allow it to act as a supplier from either location.“

As Sberbank is able to offer gold trades settled in Moscow, Zurich or London, materialised and dematerialised accounts and transfers, and loco swaps, then it would be very easy for Sberbank to buy gold on the international markets on behalf of the Bank of Russia and transport it to Moscow.

The investment banking unit of Russia’s VTB Bank, called VTB Capital, is also an active gold trader internationally. At the end of 2017, VTB Capital had made 2018 plans to sell 70-80 tonnes of gold on the Russian market (predominantly to the central bank), and sell 35 tonnes to India, and over 20 tonnes to China.

However, as gold demand from the Russian central bank went into overdrive in 2018, VTB had to scale back its international sales plans and divert more of its sales to Moscow, just to meet domestic demand from the Bank of Russia. According to an interview with Reuters, published 25 December 2018, VTB Capital’s head of commodities Atanas Djumaliev said:

“(Our) [overseas] gold sales were lower in 2018 compared with the previous year. To a greater extent it was caused by the activities of Russia’s Central bank, which was our most active client this year and which was significantly increasing its gold reserves”

While VTB confirmed that it “had bought more than 80 tonnes of gold in the Russian domestic market” in 2018, and sold “about 11 tonnes to China“, it did not reveal the total amount of gold that it sold to the Russian central bank in 2018. But facing limited supply from the domestic Russian gold mining producer, the cuts in VTB’s international gold sales in 2018 (e.g. to China), could be signalling that VTB has been diverting gold bought on the international market back to the Russian central bank.