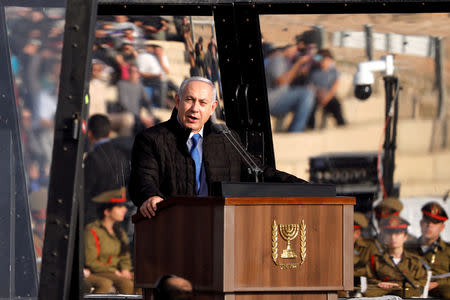 Russia’s Ministry of Defence claimed on Wednesday that Israeli missile strikes near Damascus the previous day had directly threatened two civilian flights, saying the actions were “a gross violation of the sovereignty of Syria”.

Konashenkov said the attack came from over Lebanese territory and occured as “two airliners, not from Russia, were preparing to land at the airports of Beirut and Damascus”.

He said restrictions were imposed on the use of Syrian government forces’ air defence systems “to prevent a tragedy”. One of the planes was redirected to a Russian airbase within Syria.

Syrian air defences had destroyed 14 of 16 Israeli missiles launched against unspecified targets near Damascus on Tuesday, the spokesman said.

Without directly mentioning the air strikes, Israeli Prime Minister Benjamin Netanyahu on Wednesday said: “We are standing steadfast on our red lines in Syria and everywhere else.”

An arms depot was hit and three soldiers were injured due to the attack, SANA said citing a military source.

“Our air defences confronted hostile missiles launched by Israeli war planes from above the Lebanese territories and downed most of them before reaching their targets,” the source said.

“A number of missiles hit arms depots for Hezbollah or Iranian forces,” the observatory said.

Addressing an Israeli Air Force pilots’ course graduation ceremony at the Hatzerim Air Force Base on Wednesday, Netanyahu said: “We are not prepared to accept the Iranian military entrenchment in Syria which is directed against us.

We will act against it vigorously and continuously including during the current period.

“I have said that we will not be deterred from doing what is necessary. Therefore, we are called upon and we act.

“[US] President [Donald] Trump’s decision to withdraw the American soldiers from Syria will not change our policy.”