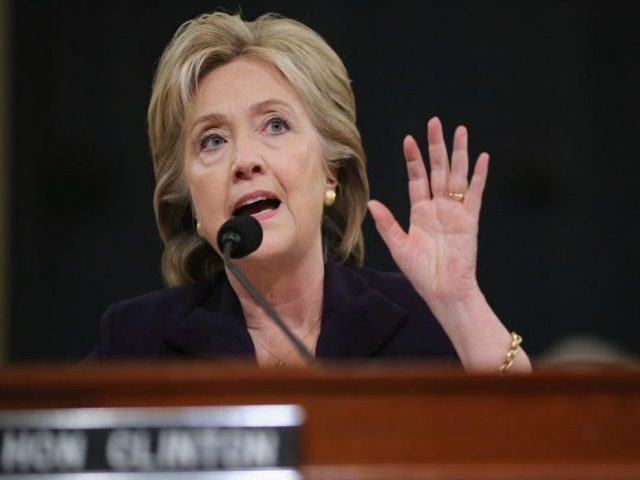 Of course, it wasn’t for convenience.  She had access to government email, and email is email.  Convenience is not the issue.  Hiding what she was doing is the issue.

A US District Court Judge ordered Hillary Clinton to answer questions last month regarding her implementation and use of her illegal email server while she was Secretary of State.  She initially rejected providing answers, but ultimately submitted them.  In her answers, Clinton said she disregarded the law against her unlawful server for the “purpose of convenience.”

In 2016, Clinton was required to submit under oath written answers to Judicial Watch’s questions.  She refused to do so.

Those two questions she had to answer were:

At the time of the judge’s ruling, Judicial Watch President Tom Fitton said, “A federal court ordered Hillary Clinton to answer more questions about her illicit email system – which is good news.  It is shameful that Judicial Watch attorneys must continue to battle the State and Justice Departments, which still defend Hillary Clinton, for basic answers to our questions about Clinton’s email misconduct.”

In response to the first question, Clinton declared under oath via longtime Clinton attorney David Kendall:

To another question regarding her October 22, 2015, testimony before the U.S. House of Representatives Select Committee on Benghazi, during which she testified that 90 to 95 percent of her emails “were in the State’s system” and “if they wanted to see them, they would certainly have been able to do so,” Clinton suggests she learned this from her attorneys, who seem to have guessed this answer.

In a separate Judicial Watch Freedom of Information Act (FOIA) lawsuit that first led to the disclosure of the “private” Clinton email system, U.S. District Court Judge Royce C. Lamberth called the Clinton email issue “one of the gravest modern offenses to government transparency” and ordered additional discovery into whether Hillary Clinton’s use of a private email while Secretary of State was an intentional attempt to “stymie” FOIA.

The answers now provided by Clinton are the latest development in a Judicial Watch FOIA lawsuit about the controversial employment status of Huma Abedin, former deputy chief of staff to Clinton. The lawsuit, which seeks records regarding the authorization for Abedin to engage in outside employment while employed by the Department of State, was reopened because of revelations about the clintonemail.com system (Judicial Watch v. U.S. Department of State (No. 1:13-cv-01363)). The court also granted discovery to Judicial Watch to help determine if and how Clinton’s email system thwarted FOIA.

“Mrs. Clinton’s assertion that she used a separate email system as a matter of ‘convenience’ is simply not credible and is belied by evidence and testimony,” said Judicial Watch President Tom Fitton. “We intend to pursue additional questions with Mrs. Clinton and others on this blatant attempt to hide her emails from Judicial Watch, the courts, Congress, and the American people.”

Of course, it wasn’t for convenience.  She had access to government email, and email is email.  Convenience is not the issue.  Hiding what she was doing is the issue.