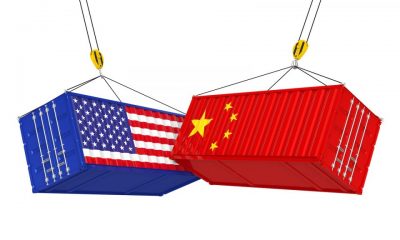 The unspoken US policy objective behind the arrest of  Huawei CFO Meng Wanzhou on trumped up charges, consists in breaking China’s technological lead in wireless telecommunications.

What is at stake is a coordinated US and allied intelligence initiative to ban China’s Huawei Technologies Co. Ltd from the “next generation” state of the art 5G global mobile phone network.

The intelligence operation is led by “Five Eyes”, a so-called “intelligence-sharing alliance to combat espionage” between the US and its four (junior) Anglo-Saxon partners: UK, Canada, Australia, New Zealand.

Western media tabloids repeatedly refer to legitimate “national security concerns” as a justification for the banning of China’s telecom equipment.

What is at stake is a fierce battle in the global wireless telecom industry.

On July 17, the spy chiefs from the “Five Eyes” nations travelled from Ottawa to Nova Scotia for a meeting with Prime Minister Justin Trudeau. (who was on a Nova Scotia tour including meetings with NS Premier Stephen McNeil)

The meeting with the “Five Eyes” spy chiefs hosted by Trudeau was held at an (unnamed) coastal resort in Nova Scotia. It was casually described by The Sydney Morning Herald (SMH) as “an informal evening after intense talks in nearby Ottawa”. Nearby?

The encounter with Canada’s Prime Minister was neither informal nor spontaneous. His presence at that meeting served to provide a “political green-light” to the “Five Eyes”  “intelligence campaign” against China:

“Trudeau, …  dropped in on the gathering to share some thoughts about geopolitical threats [from China and Russia].

In the months that followed that July 17 dinner, an unprecedented campaign has been waged by those present – Australia, the US, Canada, New Zealand and the UK – to block Chinese tech giant Huawei from supplying equipment for their next-generation wireless networks.

CIA Director Gina Haspel and Britain’s MI6 Chief Michael Younger were in attendance. The intent of this meeting was crystal clear. The arrest of Meng Wanzhou was part of a broader intelligence strategy directed against China which had been planned well in advance.

Trudeau’s July 16-17 tour in Nova Scotia was reported upon. Sofar, the Canadian media has failed to mention Trudeau’s July 17, 2018 meeting with the “Five Eyes” chiefs of intelligence.

Failure of the US Telecom Industries

It’s what you call “Fair Competition”. Bring in the Spy Chiefs!

Let’s face it : The US based telecom conglomerates are up against the wall.  The industry is in a shambles.

Moreover, the US no longer produces smart phones. Its manufacturing base in Silicon Valley has been closed down. US smart phone companies increasingly rely on China not only for cellphone production but also for the development of intellectual property.

China is not only the largest producer of cellphones Worldwide, it is a leader in wireless technology. According to an August 2018 report by Deloitte Consulting:

“China is winning the race against the United States to build a faster nationwide wireless network that uses 5G technology, billed as the mobile industry’s future. Unless the U.S. moves more quickly, it will be at a major disadvantage when it comes to creating dominant new companies in the emerging space….

Accordingly, countries that adopt 5G first are expected to experience disproportionate gains in macroeconomic impact compared to those that lag,” the report’s authors said.

U.S. companies have been sounding the alarm over a purported race against China over 5G, perhaps playing to the fears and strategic desires of the Trump White House. (Fortune, August 7, 2018)

Global Research is based in Montreal.

The complicity of the Canadian government in the arrest of  CFO Meng Wanzhou on behalf of the Trump White House is reprehensible. It puts in jeopardy Canada’s longstanding economic, social and cultural ties with the People’s Republic of China (PRC).

Did the Canadian Security Intelligence Service (CSIS) play a role in the arrest of Ms. Meng Wanzhou on December 1, 2018?

The arrest of Meng Wanzhou on December 1 in Vancouver coincided with the evening dinner meeting between presidents Xi Jinping and Donald Trump in Buenos Aires on the sidelines of the G-20 summit.
“Five Eyes” Intelligence Agencies Behind Drive Against Chinese Telecom Giant Huawei.

Moreover, according to China’s news agency Xinhua Canada’s Prime Minister Trudeau had advanced knowledge of the arrest and did nothing to prevent it from happening:

“…He didn’t notify the Chinese side. Instead, he let this kind of nasty thing to happen and assisted the US side’s unilateral hegemonic behaviour – this has hurt the feeling of Chinese people.”

As outlined above, Prime Minister Trudeau had already granted the green-light to the “Five Eyes” intelligence chiefs at the July 17 secret meeting in Nova Scotia.

Huawei portrayed by CSIS as a threat to National Security

While news reports and official statements intimate that Huawei constitutes a potential cybersecurity risk, Ms. Meng Wanzhou was arrested on December 1, 2018 in Vancouver for allegedly having violated the US sponsored Iran sanctions regime.

Did CSIS Director David Vigneault play a direct role in the arrest of Meng Wanzhou?  Vigneault hosted the Five Eyes meeting of spy chiefs in Ottawa and Nova Scotia on July 17. Prime Minister Trudeau was present at the Novo Scotia meeting.