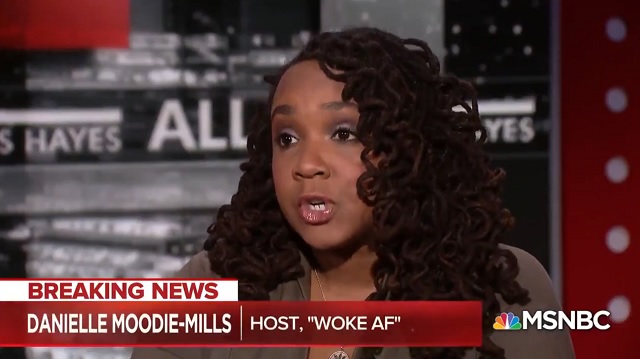 Danielle Moodie-Mills told MSNBC host Chris Hayes on Wednesday that Democrats need to “stop pandering to the white working class” which is demographically becoming a minority because they’re not “the future of this country.”

After saying that “white Americans” and “conservative Americans” are “afraid of what’s coming down the pike” demographically, the Woke AF host said:

“What Democrats need to stop doing is stop pandering to the white working class as if they’re the only ones that are part of the working class. This is the problem. When we get into identity politics and we were told, after the 2016 election: ‘stop talking about identity politics, that’s what lost us the election.'”

Moodie-Mills went on to say the “base” of the Democratic Party is “people of color” and not those at “the top” of their party’s pyramid, presumably meaning white people.

“Let us stop pretending that white women and white men are going to save us from ourselves … They’re always going to vote with their whiteness.” —@DeeTwoCents on @allinwithchris pic.twitter.com/9Qf1XgxU8V

It’s worth noting the inverse of Moodie-Mills’s electoral strategy is Steve Sailer’s the “Sailer Strategy,” which is for Republicans to aggressively go after white voters.

Incidentally, Steve Sailer was pretty much blacklisted from the media as a result of such theories whereas Moodie-Mills can advocate the same in reverse with the establishment media’s full backing.