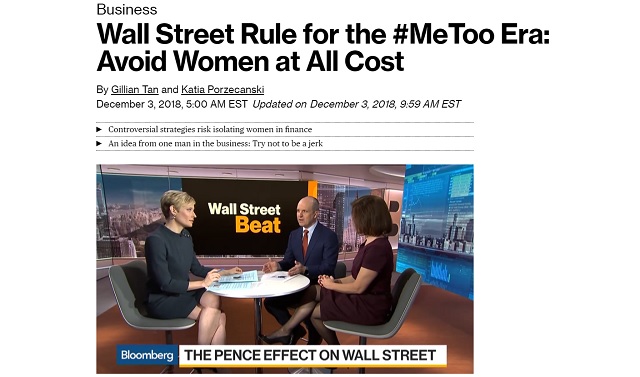 No one could have predicted this!

No more dinners with female colleagues. Don’t sit next to them on flights. Book hotel rooms on different floors. Avoid one-on-one meetings.

In fact, as a wealth adviser put it, just hiring a woman these days is “an unknown risk.” What if she took something he said the wrong way?

Across Wall Street, men are adopting controversial strategies for the #MeToo era and, in the process, making life even harder for women.

Call it the Pence Effect, after U.S. Vice President Mike Pence, who has said he avoids dining alone with any woman other than his wife. In finance, the overarching impact can be, in essence, gender segregation.

Interviews with more than 30 senior executives suggest many are spooked by #MeToo and struggling to cope. “It’s creating a sense of walking on eggshells,” said David Bahnsen, a former managing director at Morgan Stanley who’s now an independent adviser overseeing more than $1.5 billion.

Many are also having their lives destroyed due to false accusations.

Now, more than a year into the #MeToo movement — with its devastating revelations of harassment and abuse in Hollywood, Silicon Valley and beyond — Wall Street risks becoming more of a boy’s club, rather than less of one.

“Women are grasping for ideas on how to deal with it, because it is affecting our careers,” said Karen Elinski, president of the Financial Women’s Association and a senior vice president at Wells Fargo & Co. “It’s a real loss.”

Just pull yourself up by your bootstraps!

There’s a danger, too, for companies that fail to squash the isolating backlash and don’t take steps to have top managers be open about the issue and make it safe for everyone to discuss it, said Stephen Zweig, an employment attorney with FordHarrison.

“If men avoid working or traveling with women alone, or stop mentoring women for fear of being accused of sexual harassment,” he said, “those men are going to back out of a sexual harassment complaint and right into a sex discrimination complaint.”

This is the ridiculous situation we now find ourselves in.

Being accused of sexual discrimination is nothing compared to being falsely accused of rape, so don’t expect this trend to reverse.

There are as many or more men who are responding in quite different ways. One, an investment adviser who manages about 100 employees, said he briefly reconsidered having one-on-one meetings with junior women. He thought about leaving his office door open, or inviting a third person into the room.

Finally, he landed on the solution: “Just try not to be an asshole.”

Tucker Carlson was accused of rape by a woman he never met.

Innocence is no defense when the law of the land is “believe survivors.”