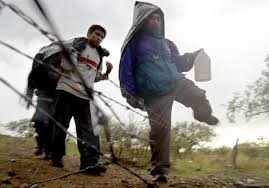 Should I stay or should I go? If you are being funded by George Soros and his Democratic-Socialist operatives, then you “go north young man”. You put some women and children at the front of the line and claim “humanitarian need”, and then “bum rush” the border. For the people that join the “Army of the Soros Republic”, you are being used as political pawns. You have been promised great riches when you illegally enter the United States. However, you will never reach your destination. You were simply put there to attack President Trump and America’s immigration laws. You are also being marched north in order to help very dangerous terrorists enter the country.

1th by land, or 2th by sea. Illegal immigrants are coming to America in the most creative of ways. This costs America $116 billion per year. Trump needs $25 billion to build the wall. Do the math. Where will we save the most money while maintaining the integrity of the border?

America needs a wall. We don’t need a wall to protect us from people who would hold 2 to 3 jobs and wait on us in restaurants and to take care of our lawns. We need a wall to protect us from unsavory elements that are entering our country in order to overthrow the Constitutional authority that keeps us free. What is going on is unquestionably a Deep State/NWO invasion of the United States.

The Dangers of Uncontrolled Immigration

Most Americans do not need a primer on the dangers of immigration but for those who have been on an attention deficit break for the past several years, here are the reason that you cannot allow totally open borders:

To those who follow my work on a consistent basis, you no doubt recognize the content of these six areas that has been extensively covered on the CSS. If you are a “doubting Thomas”, please take the key words and put them into the search engine at The Common Sense Show and be prepared to spend about 2-3 days reading all the documentation.

The abovementioned 6 facts represents the sampler plate on how the American people have bene sold out by its government in the area of immigration. As I write these words, four more caravans are headed this way with many more to follow. As I have previously documented, it is estimated that as many as 160 million migrants are expected to eventually attempt to cross the border.

To those liberals that think America can be all things to all people, please ask yourself some previously unanswered questions: