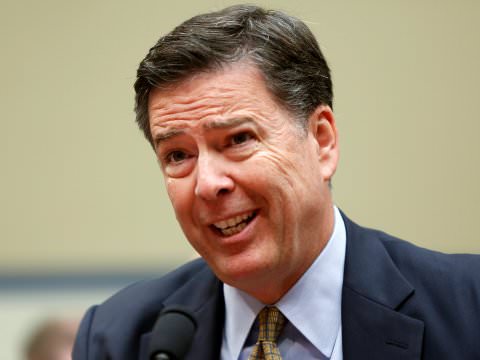 Republican lawmakers have discovered a new email chain between the FBI and DOJ that may be the most damning evidence of FISA abuses yet.

The emails are classified and lawmakers are asking President Trump to declassify them along with other pertinent Russia docs.

Former FBI Director James Comey is reportedly in this long email chain which is dated October of 2016 – just before the FBI obtained its first FISA warrant on Trump campaign advisor Carter Page.

According to award winning journalist John Solomon, sources are saying there are two very damning pieces of evidence in this new document that the FBI withheld from Congress for TWO YEARS.

“If these documents are released, the American public will have clear and convincing evidence to see the FISA warrant that escalated the Russia probe just before Election Day was flawed and the judges (were) misled,” one knowledgeable source told John Solomon.

This is significant because the FBI has maintained for the last two years that they fired Christopher Steele afterthey obtained the FISA warrant after finding out he violated FBI protocol by speaking to the media.

The FBI used Michael Isikoff’s Yahoo News article as a source to corroborate the Steele dossier when presenting evidence to the FISC. If they knew Steele was Isikoff’s source, the FBI is guilty of circular intelligence reporting which of course is against protocol. They presented the two sources as independent which means they defrauded the FISC.

John Solomon says his sources are telling him that James Comey is in the middle of this very damning email chain discussing the issues the intel community had with dossier author Christopher Steele.

John Solomon of The Hill reported:

Just before Thanksgiving, House Republicans amended the list of documents they’d like President Trump to declassify in the Russia investigation. With little fanfare or explanation, the lawmakers led by House Intelligence Committee Chairman Devin Nunes (R-Calif.) added a string of emails between the FBI and the Department of Justice (DOJ) to their wish list.

Sources tell me the targeted documents may provide the most damning evidence to date of potential abuses of the Foreign Intelligence Surveillance Act (FISA), evidence that has been kept from the majority of members of Congress for more than two years.

The email exchanges included then-FBI Director James Comey, key FBI investigators in the Russia probe and lawyers in the DOJ’s National Security Division, and they occurred in early to mid-October, before the FBI successfully secured a FISA warrant to spy on Trump campaign adviser Carter Page.

The email exchanges show the FBI was aware — before it secured the now-infamous warrant — that there were intelligence community concerns about the reliability of the main evidence used to support it: the Christopher Steele dossier.

The exchanges also indicate FBI officials were aware that Steele, the former MI6 British intelligence operative then working as a confidential human source for the bureau, had contacts with news media reporters before the FISA warrant was secured.

Sources tell John Solomon that the email chain is classified which also explains why Comey fought to have a public Congressional hearing rather than a private, closed-door deposition.