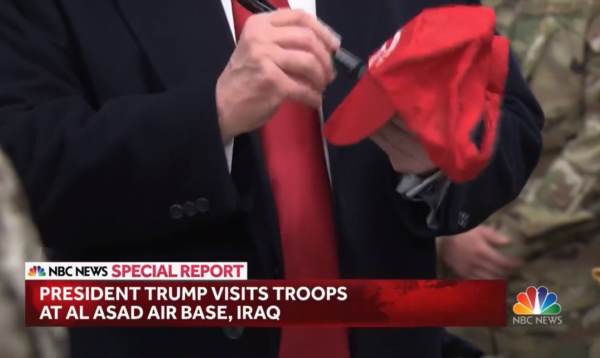 President Trump and lovely First Lady Melania Trump surprised US troops in Iraq Wednesday with a post-Christmas visit to Al Asad Air Base.

The troops went wild with a standing ovation and cheered after President Trump arrived at the base.

CNN later decided to attack President Trump and our wonderful troops who sacrifice everything to serve their country.

It’s Christmastime and the troops are away from their families, but leave it to CNN to attack them.

But it didn’t end there.

CNN’s Jim Acosta led a panel discussion on how US troops in Iraq should be disciplined for their horrible behavior of having President Trump sign their MAGA hats.

POLL: Do You Think CNN Is The Enemy Of The People?

CNN wants the US troops in Iraq disciplined for their horrible behavior.

Here, CNN asks if troops serving in a war zone on Christmas should be disciplined for having Trump sign 'Trump 2020' gear.

Is there any line of questioning beneath CNN? pic.twitter.com/dc4UU3Chyc