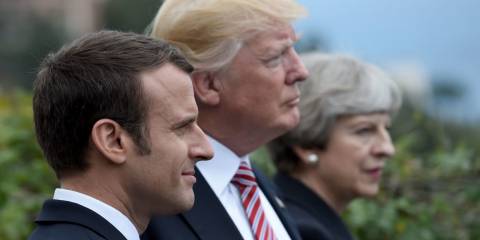 Pathetic satraps do not deserve any better. Bootlickers should know their place

UK and France have troops of their own illegally in Syria alongside the US. UK has a platoon of SAS commandos or so in Syria’s south at Al-Tanf, and France has a few hundred of soldiers in the east with the Kurds.

Despite that Trump did not tell Macron, May and their defense officials, who earlier this year also helped him cruise-missile Syria, that he’s withdrawing in advance. They had to learn about it from the media like the rest of us:

French diplomatic source: France was not consulted with, or warned about the US decision to withdraw troops from Syria.
[France has troops in Syria, and is a partner in the anti-ISIS coalition]

European officials, who have troops serving as part of the US-led anti-IS coalition in Syria, suggested they were blindsided by the abrupt decision, even if notified. “No, do you? Does anyone?” one European official, speaking with evident frustration, responded when asked if he had any guidance to offer on the US decision.

It couldn’t have happened to a better bunch! He sure showed them their place. Since they don’t have a backbone they shouldn’t be treated like they do.

Since then France has said that they’re leaving too.