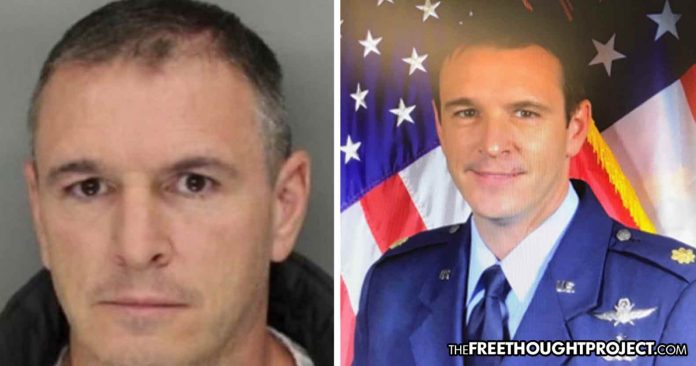 Cobb County, GA — Earlier this week, the FBI Metro Atlanta Child Exploitation Task Force held a sting to catch alleged sex traffickers and made multiple arrests in the process. During the sting, a high-ranking Air Force Colonel was ensnared by federal agents.

The undercover sex bust unfolded Tuesday night at a Cobb County hotel at which Lt. Col. Willie Newson, 47, was arrested. According to authorities, Newson thought he was meeting a 14-year-old girl at the hotel. He was actually meeting undercover agents pretending to be a child.

“Lt. Col. Newson’s alleged actions do not reflect the values we uphold in the Georgia National Guard,” she said.

As WSB-TV reports, the “undercover officer that Newson spoke with gave him the opportunity to stop communicating several times.” However, Newson continued to pursue who he thought was a 14-year-old girl.

The Air Force Colonel was using a popular dating app to pursue the child.

On Tuesday, Newson was arrested on multiple charges stemming from the child exploitation charges. After he was taken into custody, he immediately bailed himself out for $20,000.

He is currently on leave pending the outcome of the case.

“It’s upsetting to the safety of our kids, the safety of this community as a whole,” Mark Samuels, who manages the hotel where the bust took place.

Just down the road, in Fulton County, GA, a massive sting operation carried out by the FBI in metro Atlanta captured dozens of child traffickers and rescued 160 children who had been forced into sex slavery by their captors. The operation concluded in June of this year.

Illustrating the massive scope of the sting, called Operation Safe Summer, it was a collaborative effort between the FBI and 38 other law enforcement agencies from six metro counties.

“They are crimes of special concern to the FBI and to law enforcement generally,”  Special Agent in Charge Matt Alcoke told Channel 2. “Because the victims are so vulnerable as children and because the offenders could be from just about any walk of life, from a gang member all the way up to someone who is highly successful and wealthy.”