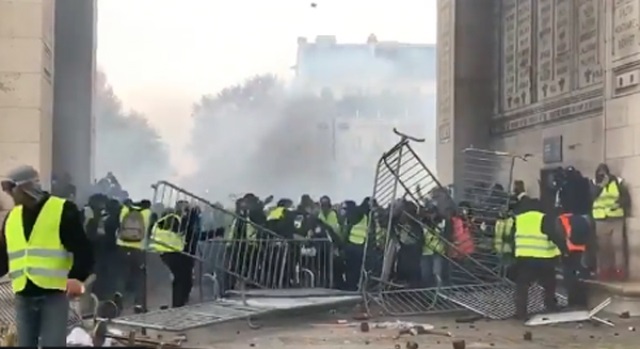 An “American living in Paris” revealed the alleged real story behind the yellow jacket protests in France in a viral post to the Pro-Trump r/The_Donald subreddit on Tuesday.

It’s important to note that the majority of protestors are middle aged, these are not college or university students, who make up the usual French protests. This is a grassroots protest. It’s been reported anywhere from 50-80% of the French support the gilets jaunes. This is NOT just about taxes.

The protests began over the new taxes imposed by Macron’s government on fuel. The taxes are viewed as punishing those who use cars and those who can’t afford to buy newer ones. The French already pay heavy taxes on fuel, along with high tolls on highways. Every car in France is required to have 2 high visibility vests (gilets jaunes). The protestors began wearing those vests while protesting.

Along with this, the cost of living is incredibly high while salaries are painfully low, especially in larger cities like Paris. The myth of government-ordered 35 hour work weeks isn’t the reality for most salaried French people. Taxes eat huge chunks of their money and the French are fed up with making the same amount in their salaries as those who don’t work at all and rely on government assistance.

Parts of France are also filled with unassimilated migrants. These migrants get government assistance as well. A large part of the French are sick of paying for migrants when French people are suffering as well. There are areas that have stopped being culturally French and cities the French avoid for holidays because of the migrant problem.

In addition to this, retired people have been lodging their dissatisfaction with their retirement pensions (one woman in a video circulating around French Facebook confronts Macron about having to live off of 500Euro a month) and Macron’s reactions have been condescending across the board. He currently has about a 26% approval rating.

All of this started bubbling up a few weeks ago as the protests began with the gilets jaunes in November. The protests last weekend got violent. Statues at the Arc De Triomphe were broken; the Arc was defaced. In Marseille, an 80 year old woman was killed as she was closing her shutters. The police threw a tear gas canister at her window. While outside of larger cities, many police officers and firefighters are taking off their helmets and/or standing in solidarity with the gilets jaunes. There have been reports that they have also refused to shake Macron’s hand and have turned their backs to government officials while serving in official capacities.

On Monday (December 2), there was a protest by the ambulances in Paris. They stood at Concorde with lights flashing and sirens sounding. Truck drivers have also showed their solidarity. They have also driven through Paris with lights flashing to show their dissatisfaction. Roads have been closed down by gilets jaunes and they are blocking access of oil in both ports and at stations. As of posting, over 650 stations are on a list of facing shortages or out of fuel. During yesterday’s news cycle, many truck drivers were seen disrupting broadcasts by honking in solidarity with the gilets jaunes.

On Tuesday (December 3), the French government spoke about their plans for “appeasement” of the gilets jaunes. Their offer was to postpone the start date of 3 taxes (related to fuel). This offer has been scoffed at by the gilets jaunes, who have called it “crumbs” as the taxes haven’t even been implemented yet and the offer does nothing to address the issues regarding cost of living.

Along with this, the French have begun demanding that Macron refuse to sign the UN Migration Act on December 10. This has begun appearing across the Facebook groups and events but has not been widely reported in the French media as far as I can tell.

This has culminated in everything from demands Macron step down to the creation of the 6th Republic. There are protests planned for Saturday across France. The protestors are calling the Paris protests ACT 4. They are quoting from the French National Anthem (“Aux Armes Citoyens”) and planning to protest at Bastille. The medical community is also participating in the protests on Saturday.