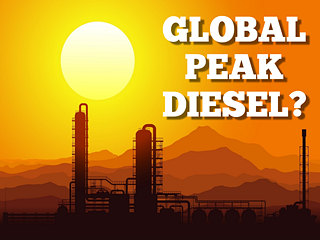 Has Peaked Diesel arrived?  Well, if so, it is terrible news for the automobile and trucking industry as well as the overall economy.  I came across this information from an article written by Antonio Turiel on his The Oil Crash website.  The article provides some sobering data suggesting that the global production of diesel fuel may have peaked.

Furthermore, due to the peak of conventional oil in 2005 and the considerable increase of U.S. shale light tight oil, the production of heavy fuel oil (not diesel, rather bunker fuel for ships, etc.) has also declined.  Turiel explains in the article The Peak of the Diesel: 2018 Edition, that the refineries cannot make as much diesel from the U.S. light tight shale oil, so they are forced to crack the heavier fuel oil to make diesel.  If true, what we have here is the cannibalization of the refinery system to continue to produce diesel at the expense of the heavier fuel oils.

If Peak Diesel has arrived, Peak Gasoline isn’t too far behind.

By Antonio Turiel (translated from CrashOil.blogspot.com)

Six years ago we commented on this same blog that, of all the fuels derived from oil, diesel was the one that would probably see its production decline first. The reason why diesel production was likely to recede before that of, for example, gasoline had to do with the fall in conventional crude oil production since 2005 and the increasing weight of the so-called “unconventional oils,” bad substitutes not always suitable to produce diesel. With the data of that 2012, I wrote “The Peak of Diesel”. At that time, there was a certain stagnation of diesel production, but it seemed to be too soon to venture if it was final or if it could still be overcome. I reviewed the issue in 2015, in the post “The Peak of Diesel: Edition of 2015.” The new data from 2015 showed that in 2012 there had really been no peaking, although diesel production had grown less strongly if we compared it with the previous historical rate, and even the last 18 months of the period studied at that time showed a certain stagnation. Now it has been another three years, and it is a good time to look at the data and see what happened.

Before starting, I would like to thank Rafael Fernández Díez for having the patience to download the JODI data, for having elaborated the graphs I show here, slightly retouched, and for having made me notice the problem that is being raised with the refining of heavy oils (We’ll see more below). He hasn’t had time to finish this post and that’s why I’m the one who wrote it, but what follows is actually his work.

As in the previous two posts, we will use the database of the Joint Oil Data Initiative (JODI). This database provides information about most of the world’s oil and refined products, but not all of them. The countries not included are countries with serious internal problems and a great lack of transparency, either because of wars or because they are very tight dictatorships. For this reason, the figures that I will show are around 10% lower than they should be if they were representing the whole world. However, given the characteristics of the excluded countries, it is most likely that their data did not change the observed trends, only the total amounts.

All the graphs that I will show are seasonally adjusted, that is, the points are the average of the previous 12 months. In this way, the effects of the variation due to the season are avoided, the graphic is less noisy and trends are better seen. The graphs will always be expressed in millions of barrels per day (Mb/d). First of all, I show you the graph of the evolution of diesel production over the past years: 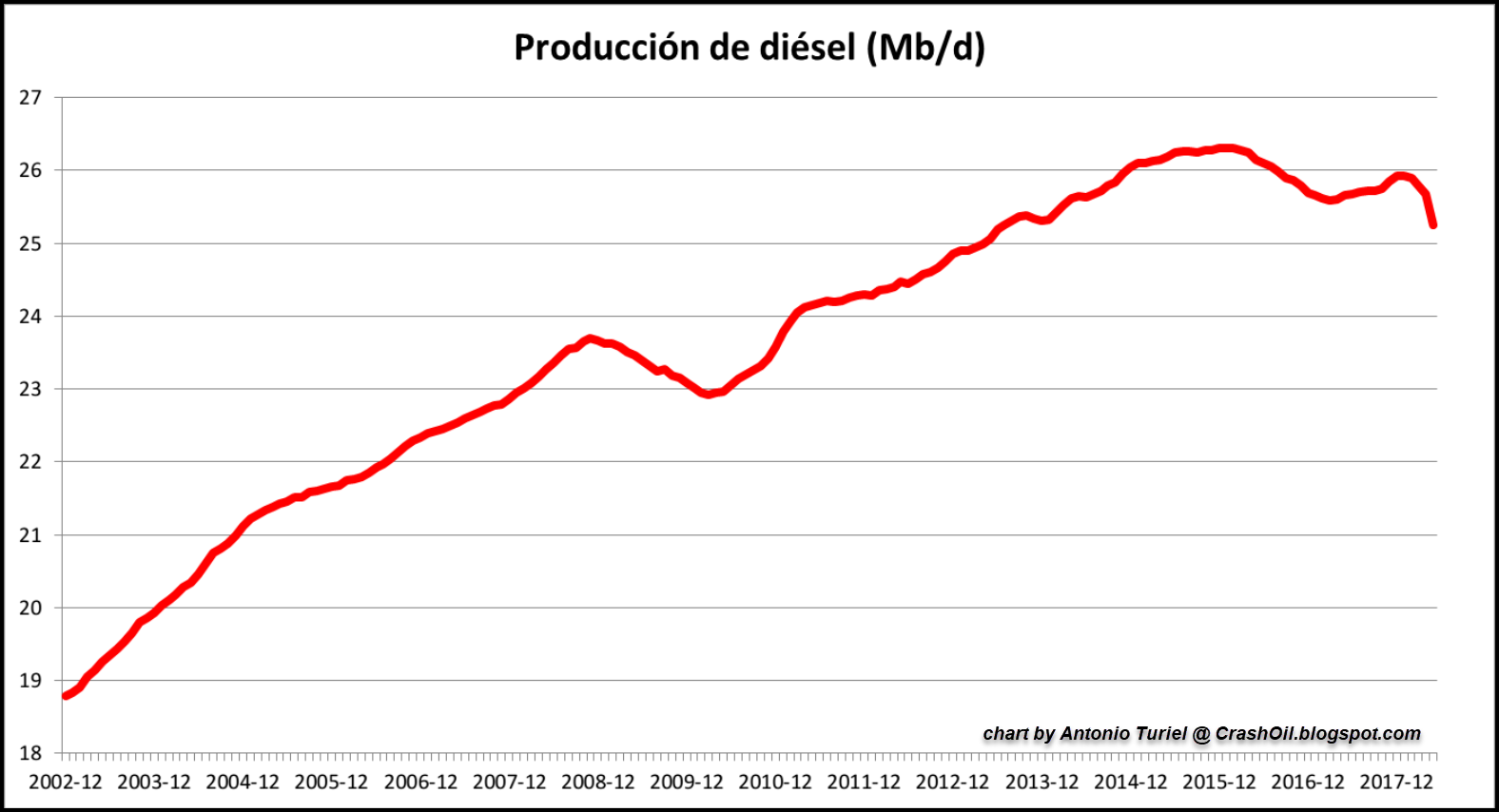 As seen in the graph, the year 2015 marked the maximum so far. There had not been such a marked drop in production since the crisis of 2008-2009, but in the case of the fall of 2015 we find that 1) there has not been a serious global economic recession; 2) the descent is lasting longer and 3) the levels of diesel production show no sign of recovery. Although it is still a little early to ensure that the peak of diesel has occurred, stagnation – even falling – is starting to drag on for too long to be ignored.

Looking at the data of JODI, two other very interesting things are observed. On the one hand, if one analyzes the production of all the fuel oil that is not diesel (fuel oil) it is found that its production has been in decline for years. 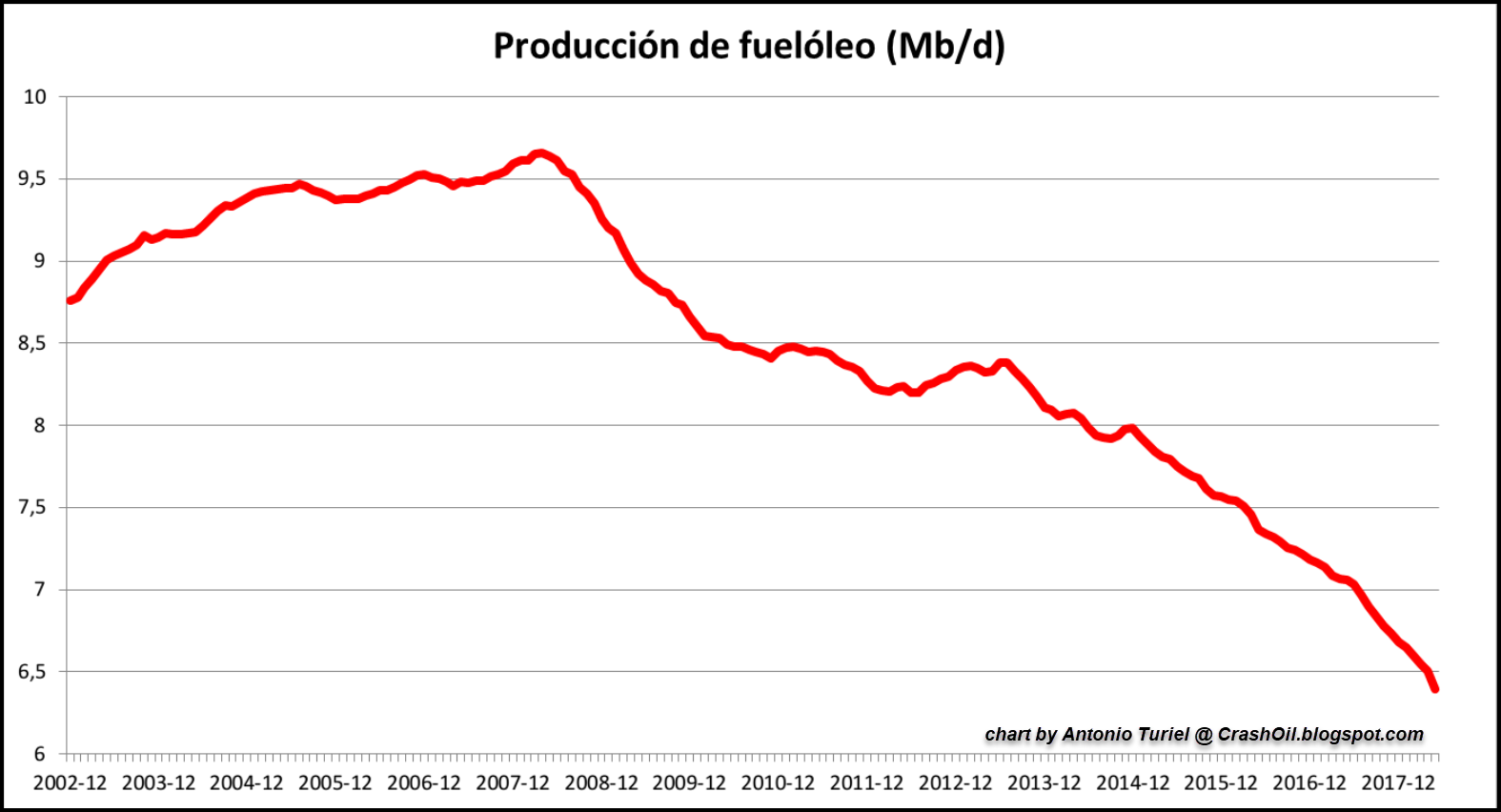 As the graph shows, since 2007 (and therefore before the official start of the economic crisis) the production of fuel oils is in decline and it seems to be a perfectly consolidated trend. The diehard economist interpretation is to consider that there is simply no demand for these fuels (which, although of the same family, are heavier than diesel). When oil is refined, it is subjected to a process called cracking, in which the long molecular chains present in the oil are broken (by means of heat and other processes) and then the molecules are separated by their different properties of fluidity and density. The fact is that if you have made changes in the refineries to crack more oil molecules and get other lighter products (and that is why less heavy fuel oil is produced), those molecules that used to go to heavy fuel oil now go to other products. By logic, taking into account the added value of fuels with longer molecules, it is normal that these heavy fuel oils are undergoing cracking, especially to generate diesel and possibly more kerosene for airplanes and eventually more gasoline. We must not forget that from 2010 the fracking in the USA began to take off, flooding the market with light oil, which is not easy to refine to make diesel. It is therefore quite likely that the refineries have adapted to convert an increasing amount of heavy fuel oil into light fuel oil (diesel). It reinforces this idea that, if we add the volumes of the two previous graphs we have, there is a certain compensation for the trends of diesel production, increasing until 2015, and the long-term trend of decrease of the rest of the fuel oils. 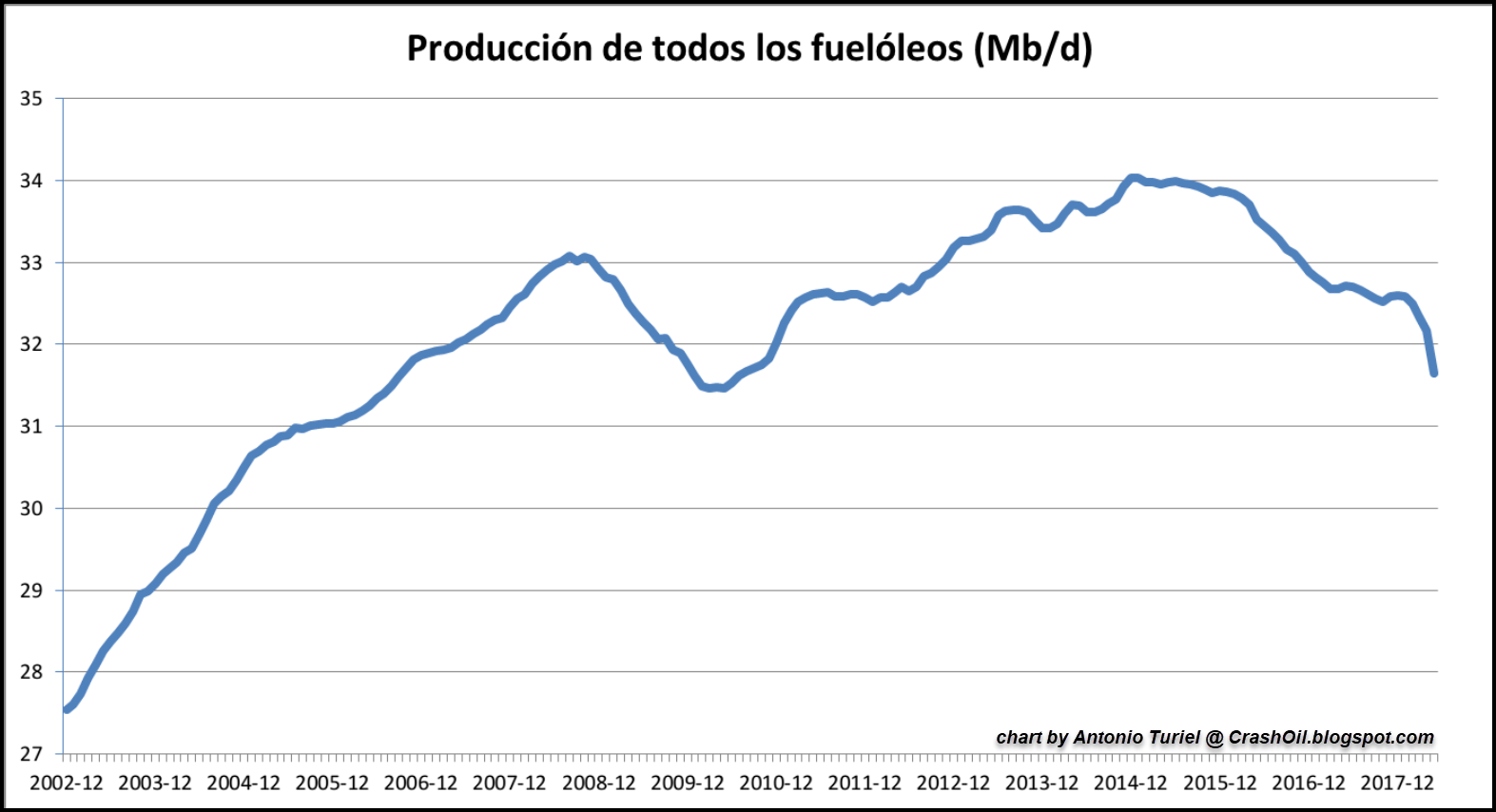 This figure shows that, after the 2008-2009 slump, it has been very hard to raise the total production of fuel oils, which peaked in 2014 and have remained there for almost a year; and at the moment it is suffering a resounding fall (about 2,5 Mb/d from the levels of 2014).