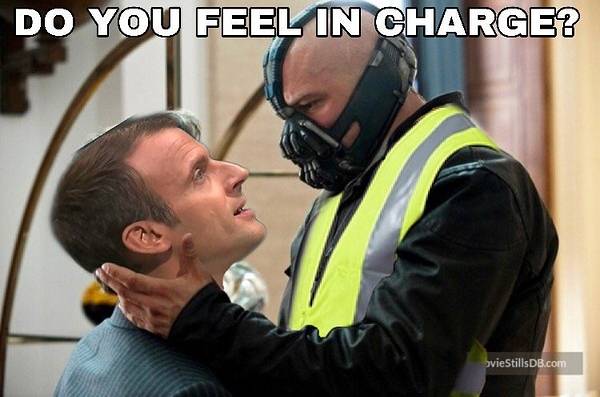 The French really shot themselves in the foot by electing Macron in the first place and now the people are rioting in protest of his policies. They are getting so extreme that it appears Macron may even be forced to resign. But are these legitimate grassroots protests?

The host points out that this protest looks remarkably similar to ‘color revolutions’ that the US has been known to produce, which could make sense since they started shortly after Macron announced plans for a European Army to succeed US-led NATO.

Regardless, Macron is immensely unpopular with an approval rating around 25%, while the protestors enjoy massive public approval.

While we’re here, some funny memes: 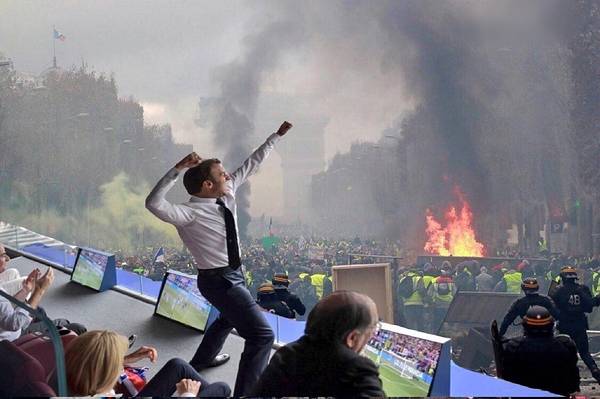 Things do not look good for Macron.

There are riots in Paris. The reason is clearly disproportionate — a microscopic rise in prices for motor fuel which has ended up in large-scale chaos, a whole army of police, smoke, shooting, blood, clouds of tear gas, water cannons, incessant sirens, and broken glass.

To be honest, it looks like a color revolution the US supplies for export. It happened right after Macron said they needed a European Army. Gas prices in France are twice as high as those in Russia but they still aren’t the highest in Europe. For example, in Germany, Greece, the Netherlands, they are even higher — by about 15%. But no one’s rioting there. While in France, there is violence in the streets and demands of Macron’s resignation.

It’s straight out of a Gene Sharp textbook — there’s coordination of protests and a viral video, allegedly made by ordinary Frenchmen calling to take the street, in addition, the protests have a catchy title “Yellow Vests”.

Seriously, how can the US tolerate an alternative to NATO in Europe? Think what you like, but the first wave of fuel riots swept across France just a week after Macron announced the need to create a European army. The situation is getting even more acute. This Saturday is no exception.

The rage of the protesters is so great that even our fellow journalists get a taste of it.

Our correspondent Daria Grigorova’s reporting from France. She also was attacked during the shooting of this report.

Where the “Yellow Vests” appear, there’s only chaos, smoke, and fire. Paris has never seen such preparations for Christmas. It’s like a real street war. The Yellow Vests are trying to defend their position near the Arc de Triomphe. Tear gas is applied in return.

The police are drowning the symbol of France in acrid smoke. The Arc de Triomphe became the center for clashes. Here, protesters began to gather in small groups since 9 am. It was clear they came not to talk but to fight.

The police applied all of the armories they had. Grenade launchers were loaded with gas grenades. Policemen shot these right at the crowd. In addition to the effect of gas, people get bruised and cut when getting hit by them. Our crew was hit with one as well.

“From one of the streets…”

However, the protesters refused to leave the area. The “Yellow Vests” at the Eternal Flame under the tears of shells sang revolutionary “La Marseillaise”. Some of them climbed to the very top. There were insults to President Macron written on the walls.

“Macron should resign and France should admit electing him was a crap decision.”

At the wide Avenue Foch, the protesters built up barricades and lit tires. When the police arrived, a battle broke out. The policemen were defending themselves on the hill, the protesters tried to take it by storm. On one of the adjacent streets, where the most severe clashes are, a water cannon has appeared. The policemen are using it as a cover. The first wounded appeared. There were more than 100 wounded. One of them is known to be in a coma.

This is how the “Yellow Vests” prepare ammunition. They disassemble the city flower-beds. Soon, these rocks will be thrown at policemen. At first, it seems there’s no plan, leader, or clear organization. There’s no certain pattern in what the Yellow Vests are doing. Black acrid smoke has filled the center of Paris. Three cars are burning in this street. Firefighters have come to put them out, however, the protesters aren’t letting them to the fire.

Today’s action was called in a theatrical manner — Act 3. The “Yellow Vests” announced mobilization throughout the country on November 24th. Since then, 106 thousand people have taken part in such actions or riots in other words.

They spread information via social media and messengers.

– It’s difficult to do it via Facebook because there’s very tight control there. Our country actually pays Mark Zuckerberg for such control, for…