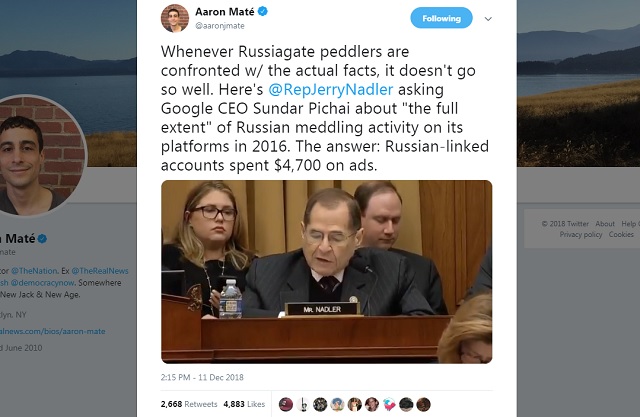 Imagine being so stupid you think our entire system could be swayed by a group of Russians allegedly spending a few million dollars in the 2016 election but Hillary Clinton’s backers spending over $1 billion had little to no effect.

Google CEO Sundar Pichai revealed that the “full extent” of so-called Russian meddling activity that took place on the platform during all of 2016 was $4,700 spent on some digital advertisements.

“Does Google now know the full extent to which its online platforms were exploited by Russian actors in the election two years ago?” Rep. Jerry Nadler, a Democrat from New York and ranking member of the House Judiciary Committee, asked the search engine’s chief executive during Tuesday’s hearing.

Whenever Russiagate peddlers are confronted w/ the actual facts, it doesn’t go so well. Here’s @RepJerryNadler asking Google CEO Sundar Pichai about “the full extent” of Russian meddling activity on its platforms in 2016. The answer: Russian-linked accounts spent $4,700 on ads. pic.twitter.com/MiZaq8HBvS

“We have — we undertook a very thorough investigation, and, in 2016, we now know that there were two main ad accounts linked to Russia which advertised on Google for about $4,700 in advertising,” Pichai responded.

Google employees and executives contributed $1.6 million to 2016 Democratic presidential candidate Hillary Clinton, according to data compiled by the Center for Responsive Politics.