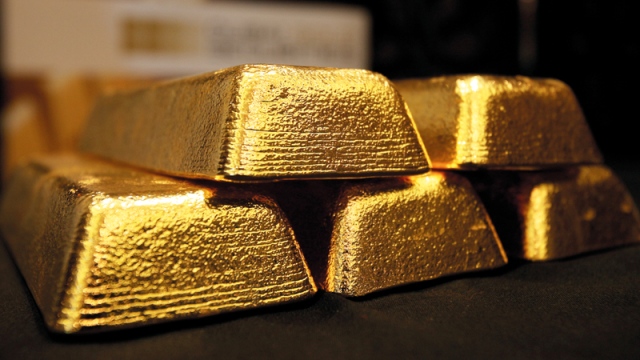 For a long long time, gold and its step child silver have gone nowhere fast. But over the past couple weeks, they’ve been stirring. So let’s chat about my favorite metal for a minute. Considering it’s Christmas season, and many of you might actually be buying something made of gold, it’s a good time to learn something about it.

In the course of my involvement with precious metals, gold has always been my favorite. For those that don’t know, I started my professional life as a jeweler. I had the ability to play with all the big name stuff, from platinum and Rhodium to gold and silver. But it was always gold that “amazed” me the most.

It’s dense. It seems too heavy for its weight. It’s got a beautiful color. It’s malleable. It’s been used as money and adornment since the beginning of time. It truly is a very special element.

Most of the jewelry you see is 10K, 14K or 18K. The K stands for Karat. Do you know where that came from and why? See, diamonds are sold by “carat” and gold by Karat fineness. What’s up with that?

Both words originally came from the French “carat” which came from the Iralian carato. That was no doubt from the Greek “keration” and that was “carob seed”. Yes folks, in times gone by, they’d weigh things against things that were common. Carob seeds were tiny and you could accurately measure weight.

So how then do we square up “carats” meaning weight of a diamond ( and therefore the “size”) with Karat meaning the fineness in gold? Well it goes back to our friends the Romans.

The Roman Emperor Constantine the First, minted a new gold coin called a solidus to replace the aureus. The plural is solidi and the word soldier is derived from it. Roman soldiers were paid in Solidi. This coin was 1/72 of a Roman pound which was the libra. It was specifically used as a measurement of gold and was also equal to 24 silver siliqua coins. The word siliqua is derived from siliqua graeca, and refers to the measurement derived from the seed of the carob tree in Grecian times. The Roman siliqua was therefore the equivalent of 24 Greco-Roman carats. From this time on the carat became associated with the number 24. ( Remember that number!)

As you can see, we’re still dealing with a weight issue so far, but that changes in the 1800’s. In 1873 the Germans created a coin called the mark. It weighed 24 carats (4.8 grams). Pure gold is too soft to make a resilient coin or a piece of lasting jewelry. It is therefore strengthened by mixing in other metals – usually copper, brass, etc. The purity of the gold that made up the mark was consequently expressed as the number of karats of gold (purity) that existed in this 24 carat (weight) coin. It is the relationship between the gold present and other metals. In this case the coin was minted at approximately 90% gold.

So, as time evolved, we came to the “rule” that “pure” gold is 24Karat. Anything less than pure, is marked by the relationship between the gold and what ever alloy they’re using to toughen it up. So,when you’re looking at a more inexpensive piece of Jewelry, it might be marked 10K. That simply means that if you look at that entire ring or bracelet as being 1000 parts or percent, 416 parts of that 1000 are gold. The rest is copper, brass, etc.

While we’d all love to have 24K jewelry, it is impractical. The metal is so soft, that you can bend it with your fingers. 22K is doable on things like pendants that hang around the neck as they don’t get too much wear, but rings and bracelets, no.

18K is about as far as you want to go up the fineness scale for reliable jewelry. It’s got a lot of the true luster of fine gold, but won’t bend and distort on your finger just because you picked up your suitcase handle.

Okay, so now back to the gold market. Because gold has gone to sleep since 2011, it’s once again been discarded by the public. Everyone likes it when it’s running higher, but when it pulls down some and trades sideways, not so much. Yet if you look at a long term chart of gold, you see something interesting. It’s been quite a performer.

Then for 20 long years it went to sleep. It drifted sideways and down, bottoming out at the year 2000/01. Then it started to rise. If you were with me all those years ago, you know I pounded the table like a screen door in a hurricane. I was convinced gold was “going to 1000 within ten years”.

But now it’s stirring again. While it is still trapped below 1300, what we do see is the gold miners have really perked up. It’s not unusual for the miners to lead the metals, and if you look at enough of them you see they’ve been doing pretty well lately.