The ‘Everything Bubble’ has popped

Now that the world’s central banking cartel is taking a long-overdue pause from printing money and handing it to the wealthy elite, the collection of asset price bubbles nested within the Everything Bubble are starting to burst.

The cartel (especially the ECB and the Fed) is hoping it can gently deflate these bubbles it created, but that’s a fantasy. Bubbles always burst badly; it’s their nature to do so. Economic suffering and misery always accompany their termination.

It’s said that “every bubble is in search of a pin”. History certainly shows they always manage to find one.

History also shows that after the puncturing, pundits obsess over what precise pin triggered it, as if that matters.  It doesn’t, because ’cause’ of a bubble’s bursting can be anything.  It can be a wayward comment by a finance minister, otherwise innocuous at any other time, that spooks a critical European bond market at exactly the right (wrong?) moment, triggering a runaway cascade.

Or it might be the routine bankruptcy of a small company that unexpectedly exposes an under-hedged counterparty, thereby setting off a chain reaction across the corporate bond market before the contagion quickly spreads into other key elements of the financial system.

Or perhaps it will be the US Justice Department arresting a Chinese technology executive on murky, over-reaching charges to bully an ally into accepting that unilateral US sanctions are to be abided by everyone, regardless of sovereignty.

How was it that the famous Tulip Bulb bubble came to a crashinf end back in the 1600’s?  No one knows the exact moment or trigger. But we can easily imagine that in some Dutch pub on the fateful night on the Feb 3rd1637, a bidder on the most-coveted of all bulbs, the Semper Augustus, had an upset stomach and briefly grimaced when hit by a ripping gas pain: 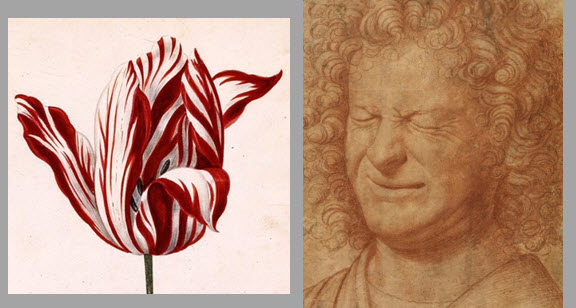 Interpreting this face as distaste for the opening bid price, the assembled crowd may have suddenly realized the absurdity of paying so much (enough to clothe and feed a family for more than half a lifetime) for an ungrown flower. The bids were pulled, and the rest is history.

The point is: it doesn’t really matter what the pin actually is. The fatal trigger is often something completely unexpected and impossible to have predicted. So obsessing over what will end the Everything Bubble is a fool’s errand.

Rather than the “pin”, what’s important to focus on is the “pop” — what the aftermath will be. The duration and height of a bubble is directly correlated with the scope of the destruction its bursting will wreak, as is the number of asset classes that get caught up in the mania.

It’s much wiser to spend our time focusing on where the damage is going to occur, what path it’s most likely to take, and how bad the losses will be — so that we can position ourselves accordingly in advance for safety and, for the more adventurous, profit.

We’ve never seen anything like current bubble we’re in. Stocks, bonds, real estate, fine art, you name it — nearly everything has been inflated to all-time highs. When this Everything Bubble pops, the pain is going to be epically calamitous.

And it’s increasing looking like the “pop” has sounded.

Every bubble requires two essential inputs to fuel its rise:

If either is missing, no bubble.

Price bubbles are not financial phenomenon, but rather psychological constructs born and nurtured in the human brain stem. Greed and fear — that’s what drives bubbles.

Greed on the way up and then fear on the way down. But neither has much influence without a tempting yarn and a lot of easy credit.

Attempting To Replace The Business Cycle With A Credit Cycle

In their quest for power and glory (and accompanied by a dead-flat learning curve), the world’s central banks are now pursuing their third, largest, and most ill-considered attempt to defeat the business cycle by replacing it with a credit cycle.  The fact that the prior two credit cycles blew up spectacularly doesn’t seem to be deterring them in the slightest.

A rather minor business cycle slowdown in 1994 was fought with a tidal wave of new credit under Greenspan. That ultimately resulted in the Dot Com Bubble crash of 2000, but the lesson went unlearned.

Instead the Fed concluded that the idea was sound, but was simply not taken far enough. The elite cheerleading squad, captained by Paul Krugman, fully supported a doubling down, and the media unquestioningly went along with the program.

So Greenspan and Bernanke created the Housing Bubble 1.0 by offering the world’s credit markets a price of money so low it couldn’t be refused.  Housing was the story, and the Fed supplied the credit.  As predicted by a scant few of us, that all blew up spectacularly in 2008. And no constructive lessons were drawn from that experience, either.

With the political aircover to “save the system” (from the problems that it created!), Bernanke, Yellen, Kuroda and Draghi then led most aggressive, coordinated central bank bender in all of human history.

$Trillions and $trillions were printed up, and many times that amount were leveraged and loaned throughout the banking and speculative finance universes: 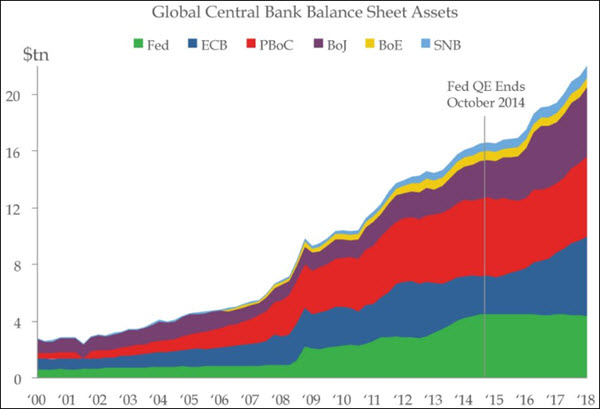 If you can’t clearly see how the above chart explains the massive price inflation over the past years in stocks, bonds and real estate, you’ll have no chance of understanding what’s coming next.  Best of luck to everyone choosing to avoid paying attention to this critical information; you’ll dearly need it.

Paying attention or not, here we all are; stuck together in a world awash with credit. $250 trillion in debt. 4 times that amount in unfunded liabilities. And a mind-bogglingly massive amount of tangled financial derivatives roughly the same size as both those debts and liabilities put together.

The Greed Is Now Gone

All that credit had to go somewhere. And it did.

Rare art fetched record-breaking prices. As did top-end trophy properties the world over.  Rare cars and large gemstones commanded the highest prices ever seen.  Stocks were bid up to ridiculous Price/Earnings multiples. And the Housing Bubble 2.0 returned to many metros around the globe — housing has never been more unaffordable to more people than it is now.

Can you feel it?  How greed is now giving way to fear?