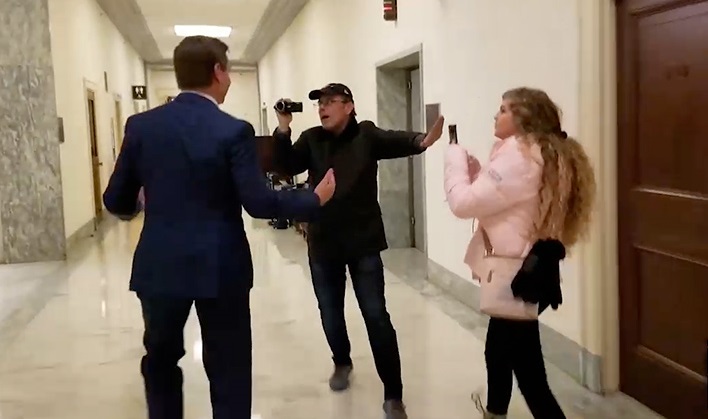 California Congressman Eric Swalwell,  a man who issued a veiled threat of nuking those who would not comply with gun confiscation laws was challenged by Kent State graduate and gun owner Kaitlin Bennett with questions on why he wanted to nuke Americans and if he was actually going to do anything regarding Google censorship.  Watch how fast he runs to the elevator.

In May 2018, I wrote about Kaitlin Bennett, a Kent State graduate who had pictures made after graduation with an AR-10 strapped to her back while in a dress on campus.  She did it to make a point about the hypocrisy of the school to allow graduates to be armed on campus but not students.  After that, California Congressman Eric Swalwell,  a man who called for the prosecution of citizens who would not turn in their weapons to the state, even issuing a veiled threat of nuking those who would not comply and said he is considering a presidential run in 2020, was challenged by Bennett with questions on why he wanted to nuke Americans and if he was actually going to do anything regarding Google censorship.  Watch how fast he runs to the elevator… just like Maxine Waters!

Instead of answering the people about serious issues, Swalwell chose to speak with a man about basketball, as the man shoved Bennett out of the way.

Of course, most people understood that Swalwell meant the threat sarcastically and not literally, but he is from California and he does want to imprison people who simply exercise their right to keep and bears arms, which he swore to uphold when he took the oath of office.  In my book, that means he might actually side one day with a tyrant that wants to nuke a certain part of the population for opposition to tyranny.

In either case, my friend Jim White has put together a short video on why Swalwell’s comments are so dangerous, given the tyrants of the 20th century who disarmed their people and literally murdered tens of millions of them.

Additionally, Bennett was involved in a case recently that was won against Kent State for discrimination regarding security costs for an event she was to speak at.  As I reported in November:

She and the group she founded and ran while on campus, Liberty Hangout, held an “open carry gun walk” on campus in September. So outraged were anti-gun groups that hundreds showed up in protest, forcing the university to hire between 300 and 400 SWAT officers, sheriff’s deputies, state troopers, and police from across the state to keep the peace. Hundreds of protestors showed up and four were arrested. It cost the university an estimated $65,000.

When Michael Heil, the student who took over Liberty Hangout after Bennett’s graduation, applied for permission to hold a meeting in the KSU student center to hear Bennett speak in November, the university approved on condition that his group come up with $1,800 to pay for security. Heil obtained the legal assistance of Freedom X law group out of Los Angeles, which filed suit against the university. Heil claimed that not only was the fee unfair, it rewarded protesters likely to show up with protection from their own illegal behaviors. As William Becker, the Freedom X lawyer, explained:

By assessing such security fees against the Plaintiffs, Defendants … are responsible for ratifying an unconstitutional heckler’s veto, taxing protected speech and rewarding those who disrespect the solemn and precious freedoms safeguarded by the First and Fourteenth Amendments.

Such a fee assessment against the student sponsors of the event effectively curtails their ability to hold it due to the high cost of security and amounts to a form of censorship and punishment.

Furthermore, wrote Becker, the fees were discriminatory and arbitrary: