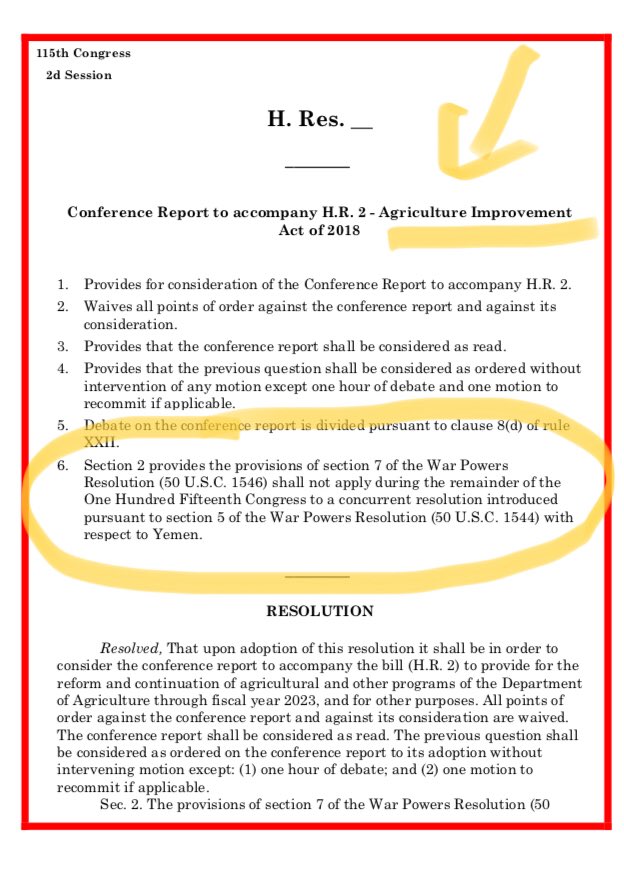 Hiding the provision in a Farm Bill, the House passed an insidious piece of legislation that will facilitate perpetual war and genocide in Yemen.

Yesterday, Congress violated the Constitution and the War Powers Act by voting to block and further moves by Congress, to withdraw U.S. forces from the wholesale slaughter and genocide currently taking place in Yemen. This move was done using the Farm Bill.

Many Americans are wondering what, exactly, a Farm Bill has to do with genocide in Yemen. The answer to that question is absolutely nothing. However, it does make for a good hiding place for insidious and illegal legislation, which is why the Agriculture Improvement Act of 2018 contained a section which removed the application of the War Powers Resolution.

As the mainstream media reported on the government finally legalizing a plant—industrial hemp—that should have never been illegal in the first place, one of the most disgusting moves ever by Congress was carried out in the dark like cockroaches.

“To avoid a debate on whether the US should be involved in a war in Yemen, today our leadership will trick members into suspending the provisions of the War Powers Act,” tweeted representative Thomas Massie yesterday morning. “Sad!” he said. “Despicable” that House Speaker Paul Ryan “is shirking responsibility for debating our involvement in the Yemen war by hiding the war resolution in a procedural vote on the farm bill.”

Does your Congressman know what’s hidden in a procedural vote on the Farm Bill today? Does he or she care? To avoid a debate on whether the US should be involved in a war in Yemen, today our leadership will trick members into suspending the provisions of the War Powers Act. SAD! pic.twitter.com/PVziN9d2lP

In short, members of Congress voted to suspend the War Powers Act with regard to Yemen and halt any further debate on America’s support of the terrorist nation of Saudi Arabia inside the country. Insidious indeed.

However, this is the second time Congress attempted to sneak a vote for perpetual war in Yemen into entirely unrelated legislation. Last time, they hid it inside a bill about wolves.