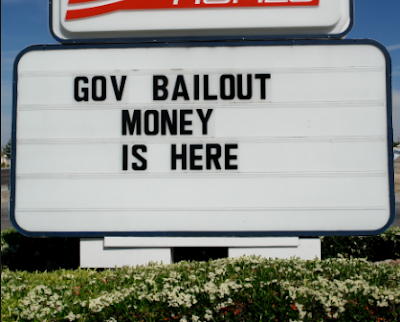 With numerous retailers filing for bankruptcy over the past two years, and private pensions having reached the point of extreme underfunding, some members of Congress are looking to use the taxpayer once again as a bailout device to protect their donors and constituents.

In a new expose on a Congressional committee meant to find solutions to the country’s vast pension shortfalls, one proposal to emerge would entail the taxpayer coughing up $3 billion a year to go into the Pension Benefit Guarantee Corporation (PBGC) which normally is funded by corporations that use it as a backstop in case of their own bankruptcies and insolvencies.

It shouldn’t come as a surprise that, in the first draft of its plan to save these pensions, the committee proposed restoring the Pension Benefit Guaranty Corporation (PBGC) to solvency with – you guessed it – taxpayer backed “subsidies” from the Treasury to the tune of $3 billion a year. The plan is also considering raising premiums, introducing new fees and – importantly – cutting benefits. A draft of the plan, obtained by The Washington Post, would direct the Treasury Department to spend up to $3 billion annually to subsidize payments for retirees from certain underfunded pensions. It would also require benefit cuts, higher premiums and new fees levied against companies and union members in an attempt to make the pensions as financially solvent as possible. The proposal aims to require all parties involved to make significant concessions and caps taxpayer contributions. The retirement programs are called “multiemployer” pensions, as workers from multiple companies pay into the same retirement benefit program. But many of these pensions lack the financial assets to cover the benefits they have promised retired workers, leading to a panic from retirees who were counting on the funds. These pensions often have been plagued by mismanagement, inaccurate economic projections and in some cases corporate bankruptcies. – Zerohedge

The PBGC is similar to the FDIC, which itself is normally funded by fees paid for by the banks to protect depositors from institutional insolvencies.  However like its sister program, the PBGC holds just pennies on the dollar in relation to the amount of pensions they are supposed to backstop.