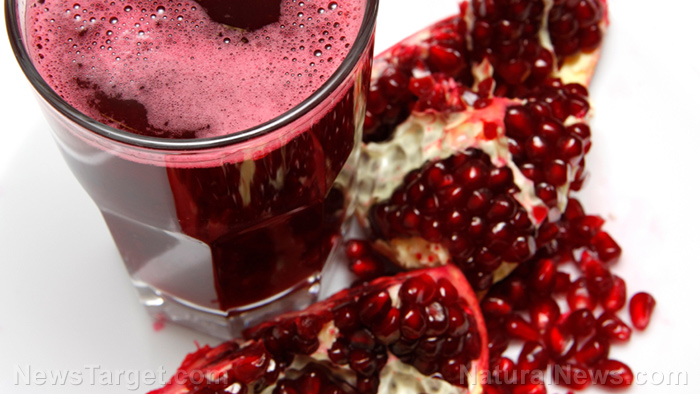 With proper dietary supplementation with anti-inflammatory and antioxidant agents, cancer may be prevented or slowed down. One of these powerful anti-cancer agents is pomegranate. According to research, pomegranate juice and pomegranate extract contain powerful healing chemical compounds such as luteolin and ellagic acid that effectively work together to help prevent cancer cell growth, particularly prostate cancer cells.

Prostate cancer is one of the most common cancer types, affecting one in nine men. It is also the second leading cause of death from cancer among American men.

Researchers exposed human prostate cancer cells to pomegranate fruit extract. Exposure to the extract caused the cancer cells to immediately produce substances that cause apoptosis, which is the programmed cell death in cancer cells. This process controls the destruction of potentially cancerous tissue in the body.

In a more in-depth study on pomegranate compounds, German researchers searched for ways to reverse or slow down tumor growth in some types of prostate cancer. They evaluated a variety of pomegranate extract forms, such as those from the seeds, juice, and fruit oils.

The researchers found that pomegranate extracts work together with several important mechanisms to help hamper the growth of cancer cells, which is in contrast to the drugs used in chemotherapy that only work through one mechanism. Eventually, this will cause cancer cells to be immune to chemotherapy.

In addition, the researchers discovered that pomegranate extracts do not affect healthy prostate cells and only target cancerous cells.

Overall, pomegranate juice and pomegranate juice extract help to decrease cancer cell growth rates and increase cell death rates. At the same time, these anti-cancer agents enhance the ability of healthy cells to withstand oxidative stress. These findings prove that pomegranate is a powerful agent in fighting against prostate cancer.

Other benefits of pomegranate juice

Pomegranate juice also provides other health benefits in addition to its anti-cancer benefits. Here are some of them:

It is rich in antioxidants: Pomegranate juice is packed with antioxidants. In fact, it contains higher antioxidant levels than most other fruit juices. It is also three times rich er in antioxidants than red wine and green tea. These antioxidants can help eliminate free radicals from the body, protect cells from damage, and fight inflammation.

It is rich in vitamins: Pomegranate juice can provide more than 40 percent of the daily vitamin C requirement. Make sure to drink homemade or fresh pomegranate to get the most of vitamin C as this vitamin can be broken down when pasteurized. Pomegranate is also a good source of other nutrients, including folate, potassium, and vitamin K.