All good things come to an end and this just may be the beginning of the long last decline and fall of the Clintons and their inherent corruption. The House subcommittee this week will convene a politically charged investigative hearing into the Clinton Foundation. Then President Trump is nominating former Attorney General William Barr to replace Jeff Sessions. Barr has been critical of the Russian investigation which is really pathetic but more importantly, he will pull no punches in investigating the Clintons.

The Democrats will scream and yell and maintain that the Clinton family charity is a true international Messiah saving the world and promoting world peace will advocating a new cold war against Russia for spilling the truth. I find it amazing how the corruption of the mainstream media is so prominent that they push this Trump association with Russia to win the election but refuse to talk about the emails that revealed that Hillary had rigged the election and took over the Democratic Party so she would get the nomination. When you have countries that do not support women’s rights or gay rights donating money to the Clinton Foundation it was obviously for influence, not charity.

The Clinton Foundation is the poster-child for political corruption and tax fraud. What we are about to witness is the start of a political war in the House before the handover to the Democrats in January. It was Donna Brazile, former chair of the Democratic Party, who wrote about how the Clintons took over the Democratic Party and used it for themselves. She wrote:

“So I followed the money. My predecessor, Florida Rep. Debbie Wasserman Schultz, had not been the most active chair in fundraising at a time when President Barack Obama’s neglect had left the party in significant debt. As Hillary’s campaign gained momentum, she resolved the party’s debt and put it on a starvation diet. It had become dependent on her campaign for survival, for which she expected to wield control of its operations.”

The Hill has reported the shenanigans of the Clintons and the investigation that has been underway regarding the Clinton Foundation. The submission also cites an interview its investigators conducted with Andrew Kessel that quotes the foundation’s longtime chief financial officer as saying he was unable to stop former President Clinton from “commingling” personal business and charitable activities inside the foundation and that he “knows where all the bodies are buried.”

What is at stake is the core of the Democratic Party. Their reliance on the Clinton Foundation has been unprecedented. It was more than just corruption and tax fraud, the Clintons are the ones, not the Russians, who sought to manipulate the entire country for personal gain. Brazile further wrote:

“I had promised Bernie when I took the helm of the Democratic National Committee after the convention that I would get to the bottom of whether Hillary Clinton’s team had rigged the nomination process, as a cache of emails stolen by Russian hackers and posted online had suggested. I’d had my suspicions from the moment I walked in the door of the DNC a month or so earlier, based on the leaked emails. But who knew if some of them might have been forged? I needed to have solid proof, and so did Bernie.”

If we look back on April 23, 2015, just two weeks after Hillary Clinton officially declared her presidential campaign, her staff sent out a message on the strategy to manipulate the Republicans into selecting the worse candidate. They included this attachment a “memo for the DNC discussion.” 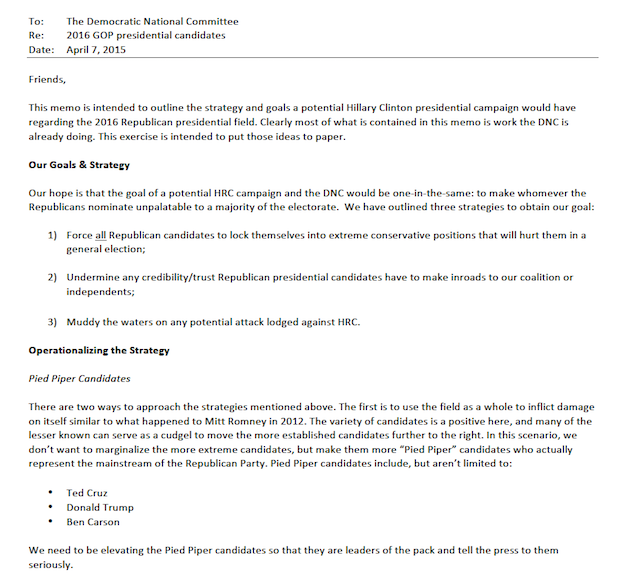 The memo was addressed to the Democratic National Committee and stated bluntly, “the strategy and goals a potential Hillary Clinton presidential campaign would have regarding the 2016 Republican presidential field.” Here we find that the real conspiracy was Clinton manipulating the Republicans. “Clearly most of what is contained in this memo is work the DNC is already doing. This exercise is intended to put those ideas to paper.”

“Our hope is that the goal of a potential HRC campaign and the DNC would be one-in-the-same: to make whomever the Republicans nominate unpalatable to a majority of the electorate.”