When it comes to the relationship of U.S. citizens to the politicians and bureaucrats in Washington D.C., there’s no indication that anything remotely resembling self-government is happening. Rather, the relationship is far more like that of a servant to a master.

From the October post: Americans are Stuck in Abusive Relationships with Power

The gilets jaunes, or “yellow vests” protests, emerged seemingly out of nowhere about a month ago and have in a few short weeks shaken the French political power structure to its core. Just yesterday, the exceedingly unpopular President Macron cried uncle and offered a series of concessions to the protesters. Many commentators have come to the simplistic and erroneous conclusion that violence works, but it wasn’t the burning cars or streets filled with tear gas that really scared Macron and the people around him. It was something much deeper than that.

First, powerful elites tend to be control freaks. Abuse of the law, institutionalized corruption and invasive surveillance typically make the powerful feel comfortable their position is secure. What really makes them shake is when something totally unexpected happens — and the virality and force of the gilets jaunes movement caught them off guard.

Second, the diverse, nebulous and leaderless nature of the participants and their grievances made it a difficult narrative to counter through the media or government spokespeople. It wasn’t masterminded by dissident political parties or even France’s activist unions. Though it was catalyzed by rising taxes on diesel fuel, it quickly became a rallying point for a hodgepodge of individuals with a variety of serious gripes against Macron and his neoliberal policies.

Third, and most important, the protests have been very popular amongst the wider French population, with polls in early Decembershowing around 70% support. For Macron, a former Rothschild investment banker nicknamed “president of the rich,” that kind of broad support isn’t something easily ignored (though I’m sure he tried).

As the protests started to attract increased international attention, I began to wonder if they could spread spontaneously to other nations. As such, it was noteworthy to see reports of yellow vest-style protests in Belgium, and to a lesser extent The Netherlands, this past weekend. Then last evening I came across the following headline from the AP. 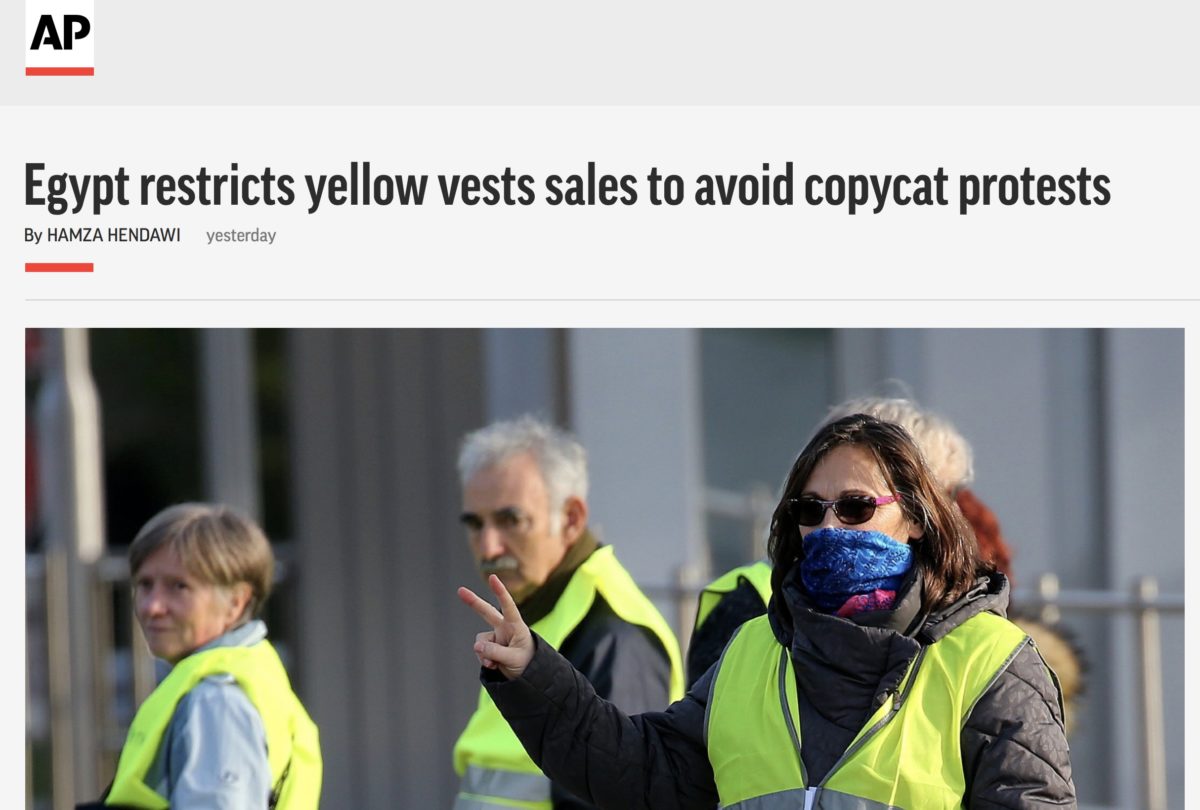 They said industrial safety equipment dealers have been instructed not to sell yellow vests to walk-in buyers and to restrict business to wholesale sales to verified companies, but only after securing police permission. They were told offenders would be punished, the officials said without elaborating.

You know a government’s weak and paranoid when they’re afraid citizens might wear an article of brightly colored clothing into the streets, but the concern is warranted. Not just in Egypt, but across the world.

We humans are systematically manipulated into seeing ourselves as totally different and at odds with one another, but the truth of the matter is virtually all of us currently living on this beautiful planet share something very significant in common with one another. We all reside in countries run by and for the benefit of a tiny group of lawless and unscrupulous people. While some nations are clearly in far worse shape than others, we all live in very corrupt and increasingly unfree societies.

Because humans are easily divided and conquered, both within our own countries and on a global level, the few are able to easily rule over the many. If we can somehow find a way to resist power elite manipulations and unite to focus our attention on the true root of our problems, there’s nothing we can’t accomplish.

With Christmas coming and the weather in the northern hemisphere set to get colder, it’s certainly possible the gilets jaunes movement dies down a bit. If so, I have no doubt it’ll remerge even stronger down the road, because absolutely nothing systemic has been solved with Macron’s pitiful concessions.

More significantly, the French have provided the rest of the world with an important lesson. That protest movements should ideally tap into widespread grievances and capture the support of the masses in order to be most powerful and effective. This shouldn’t be hard for anyone, since I can’t think of any major governments anywhere in the world that aren’t completely captured by destructive special interests and unprincipled oligarchs.