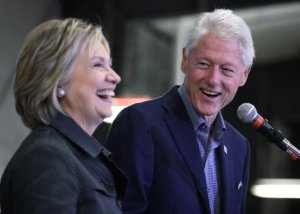 Many have read sprinkles of press releases from the justice department regarding arrests and indictments coming out of Arkansas, but few have observed the magnitude of this swamp creature and all its tentacles. They rarely tie the individuals into the big picture in these press releases, so oftentimes, it’s a quick, “yay, another swamp creature down,” without realizing they all connect. Aside from local news outlets in Arkansas, that require paid subscriptions to read the news, the Arkansas swamp is getting little to no coverage.

Remember the plane full of documents in Little Rock? Everyone was speculating as to who/what it could be about, and hoping it had to do with the Clinton Foundation investigations. Is it possibly connected to this ongoing investigation into legislator fraud? In August 2018, Deputy Attorney General Lloyd Warford, said that investigators have at least 4 million documents in a vault and another 200 gigabytes of information they have collected from the Department of Human Services. Warford also confirmed that more lawmakers are under investigation by the state, in cooperation with the federal investigation. They have already convicted over a dozen individuals in one case alone, several of which are former or current legislators, one former senator has already begun his 18-year prison sentence, and there are a slew of other individuals listed in indictments. It is quite an extensive list below.

Furthermore, on January 4, 2018, the Justice Department launched a new inquiry into whether the Clinton Foundation engaged in any pay-to-play politics or other illegal activities while Hillary Clinton served as Secretary of State. As far back as October 31, 2016, The Wall Street Journal reported that FBI field offices in New York, Los Angeles, Washington D.C., and Little Rock had been collecting information on the charity for more than a year. That’s an interesting timeline, as that aligns with when the Arkansas swamp case emerged as well. Apparently, the L.A. office had gathered information about the foundation in an unrelated public-corruption case. Interestingly, lower-level FBI agents stated that McCabe instructed them to stand down. One might speculate, there have been Clinton Foundation investigative documents compiled from multiple states, going back to 2015, and those documents were placed into the appropriate hands in 2017. That’s quite a head start.

Coincidentally, the more recent Clinton Foundation probe was also examining whether any tax-exempt assets were converted for personal or political use, and if the foundation complied with applicable tax laws. Why is this a coincidence? These areas of investigation are precisely what they have been investigating with other elected officials and appointed officials in the Arkansas swamp cases. Do these investigations overlap or perhaps tie together somewhere along the rope? Hard to say just yet. One thing is for certain – they are hunting webs. These are not single criminal incidents. They are going after the networks. What does this mean? This is not about flinging snowballs, this is about creating an avalanche. The question is, who all will be rolled up in this snowstorm?

The Clintons Are Circling The Drain

1) The turn of events that are coming up over the next several weeks are quite timely. Sara Carter recently reported:

“House Judiciary Committee Chairman Bob Goodlatte (R-Va.) notified colleagues last week that he will subpoena Comey for a closed-door deposition Nov. 29 and Lynch for Dec. 5, as part of the investigation into the FBI and DOJ’s handling of the Hillary Clinton email probe and the Russia investigation.”

2) Meanwhile, Judicial Watch saw yet another victory in their ongoing case against the U.S. Department of State:

Q 2: During your October 22, 2015 appearance before the U.S. House of Representatives Select Committee on Benghazi, you testified that 90 to 95 percent of your emails “were in the State’s system” and “if they wanted to see them, they would certainly have been able to do so.” Identify the basis for this statement, including all facts on which you relied in support of the statement, how and when you became aware of these facts, and, if you were made aware of these facts by or through another person, identify the person who made you aware of these facts.

3) By far, the biggest bombshell, published by The Hill, was the announcement of the GOP holding a hearing on December 5th into the DOJ’s probe of the Clinton Foundation. The timing is simply divine, with Sessions stepping down, Whitaker stepping up, and Huber stepping in.

“Mr. Huber with the Department of Justice and FBI has been having an investigation — at least part of his task was to look at the Clinton Foundation and what may or may not have happened as it relates to improper activity with that charitable foundation, so we’ve set a hearing date for December the 5th,” he told Hill.TV during an interview on Wednesday.

Sessions appointed Huber last year to work in tandem with the Justice Department to look into conservative claims of misconduct at the FBI and review several issues surrounding the Clintons. This includes former Secretary of State Hillary Clinton’s ties to a Russian nuclear agency and concerns about the Clinton Foundation.

Huber’s work has remained shrouded in mystery. But Meadows said the committee thinks it’s time Huber gives an update to Congress about his findings and expects him to be one of the witnesses at the hearing.

“We’re just now starting to work with a couple of whistleblowers that would indicate that there is a great probability of significant improper activity that’s happening in and around the Clinton Foundation,” he said.

The foundation meanwhile has repeatedly denied any wrongdoing.

4) One surprise drop on November 16, 2018, was ABC News, reporting that nearly three dozen sealed criminal indictments have been added to the Washington D.C. docket since the start of 2018, fourteen of which were added since late August alone. Though these sealed indictments certainly don’t come as a great shock to many, it’s the timeline that is key here. Until they are unsealed, the names remain a mystery.

5) The Clintons’ 2017 tax returns are out, indicating a 90% decrease in donations between 2014-2017, declining from $182.5 million to $22.8 million in 2017. This is very telling, being as she lost the ability for pay-to-play schemes, since she didn’t win the presidential election. Also, it would be a grave mistake to donate to the Clintons with ongoing investigations. Keep in mind, the Clinton Foundation is not their only cash cow. They have 50 organizations, foundations, shell companies, initiatives, and LLCs, with some documented as being in other countries. Despite their creative ways of moving cash flow around, it’s still a very good sign that donors are taking a step back from the Clinton Foundation.

Charles Ortel, a brilliant financial analyst, who has dissected the Clinton’s tax returns year after year, exposing the inconsistencies and illegal filings, had this to say: