Pelosi, Schumer, and the rest of the Make America Miserable Again crowd have been trying to destroy President Trump by the death of a thousand cuts.

As my favorite American philosopher, Yogi Berra once said, “It’s tough to make predictions, especially about the future.”  Nevertheless, I’m going to take a stab at it.

Are you ready for the night of the long knives?  Pelosi, Schumer, and the rest of the Make America Miserable Again crowd have been trying to destroy President Trump by the death of a thousand cuts.  Every day 24/7 their poodle press in the ABCCBSNBCCNNMSNBCPBSNPR Cartel has been trumpeting the lies and false accusations of their endless stream of fake news.

They follow the teachings of Joseph Goebbels that “If you tell a lie big enough and keep repeating it, people will eventually come to believe it.”    They operate on the wisdom contained in one of Mark Twain’s observation, “A lie can travel half way around the world while the truth is putting on its shoes.”  And the Low Information Voters drink it all in and repeat it Ad Nauseam as their own personal opinions

Teaching Political Science and History, I have a window into the thinking of those who’ve been raised listening to the Cartel and being indoctrinated in our modem education system.  They grew up with smartphones

in their hands, worshipping Al Gore, and came to the age of maturity voting for Bernie.  From my observations, the Cartel and the Democrat Socialists have picked a strategy that works.

Forget about the fact that half the people who should know better have inhaled the same illusionary smoke.  After watching the implosion of the USSR and the destruction of Cuba and Venezuela they still hate capitalism as they frog march themselves into the voting booth to vote for the rope that’ll hang them.   And in the long march from freedom to serfdom coming up behind us is a generation ready to give what they’ve been taught is the revolutionary new idea of socialism a try because they think it just means free stuff for everybody.  If demographics is destiny and education is the seedbed of the future with our porous borders and progressive curriculum we’ve sown the wind and we’re about to reap the whirlwind.

With the election of the blue-collar billionaire, we had a chance to maybe turn the ship of state around before we hit the iceberg of socialism, bankruptcy, and military adventurism but the Deep State bureaucratic nomenklatura couldn’t have that.  So, they marshaled all their resources and have been working on the aforementioned death of a thousand cuts.  And if the results of the recent midterm election are any indication they’ve accomplished their goal.

They’ve captured the House of Representatives and will soon have the power to investigate until they reach they preconceived conclusions.  Who are these counter-revolutionary street fighters dedicated to overthrowing the results of the 2016 election?  They are the Party that fixed the primaries so the poster child of corruption could defeat the poster child of socialism.  They are the Party that colluded with the Russians to create the Steele Dossier which they then used as the evidence to investigate Trump for colluding with the Russians.  They are the Party that used the security apparatus to try and sandbag their opponent before and after the election.

Here comes the hard part of being a political prognosticator, the prediction part.

Because they are the Party that will find after their exhaustive show trials and prejudiced investigations just as their preconceived conclusions predicted surprise, surprise, surprise President Trump has committed high crimes and misdemeanors.  No matter what they call them charges they will actually be, “We don’t like you and Hillary was supposed to win.”

Though some of the more savvy political savants among the Blame America First crowd realize impeachment will be toxic knowing it will energize Mr. Trump’s base like nothing else could.  They’ll do it anyway.

Though they and their friends in the Fed know if they succeed in tanking the economy which has surged under Trump it will be blamed on them.  Of course, they won’t be held accountable by the lapdog media but they will by the work-a-day consumers it will hurt.  They’ll do it anyway.

In spite of all the obvious signs that having people like Nancy Pelosi and Maxine Waters as the face of their party is going open the floodgates for even more middle-class working Americans to wake up and smell the Constitution burning.  They’ll do it anyway.

Like moths to a flame, the perpetually angry purveyors of identity politics, culture war, and taking America down a peg or two will overplay their hand.  They’ll push their slow-motion coup to its logical conclusion impeaching President Trump. 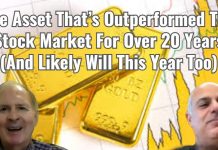 Bill Murphy: This Asset’s Outperformed The Stock Market For 20 Years (And Likely Will This Year Too)