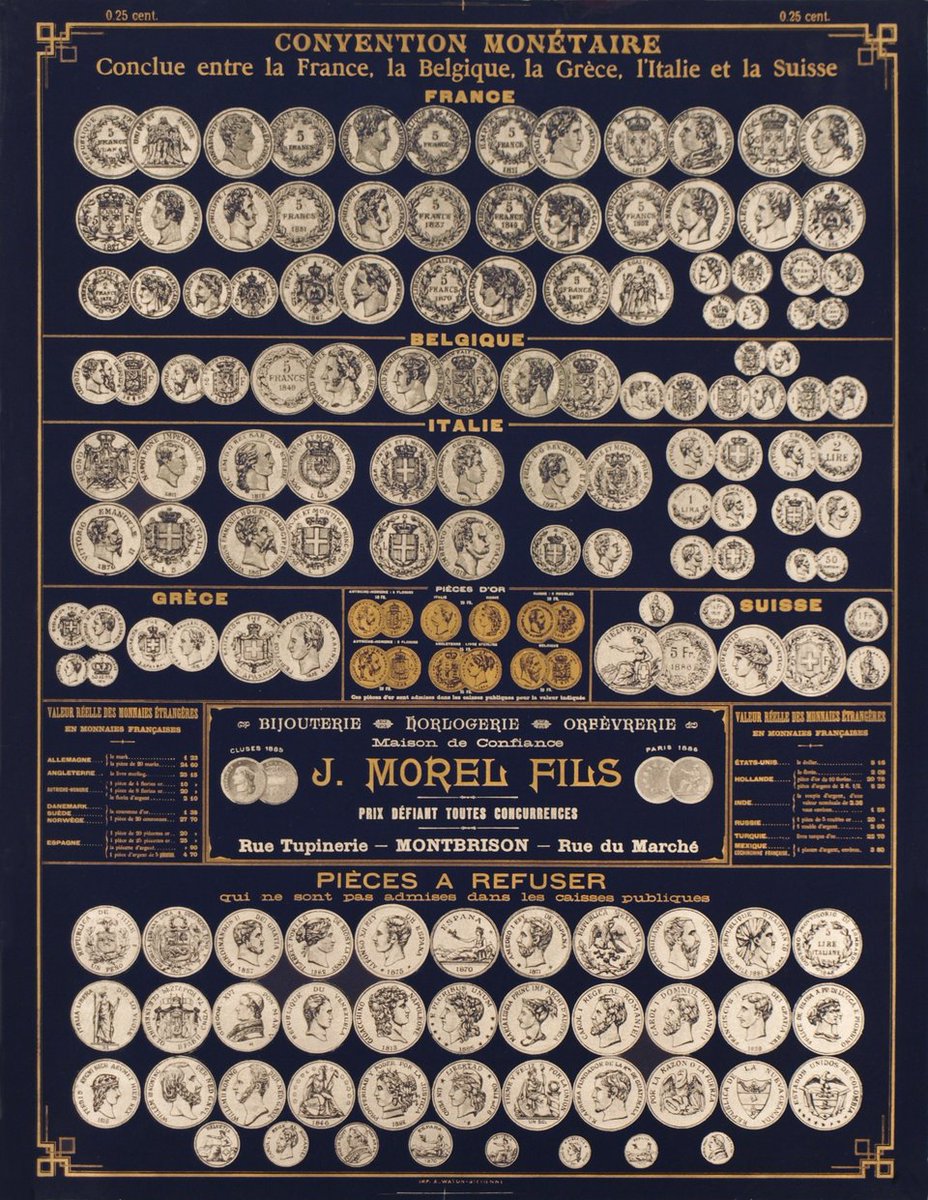 Last month in November, representatives of 54 nations met at a gathering of the International Bureau of Weights and Measures (BIPM) and unanimously voted to redefine the kilogram. For over a century, an actual weight housed in the BIPM’s basements has been used to define the kilogram. Now it will be defined by reference to Planck’s constant

Given how easily we are able to modify our global standard for measuring weight, isn’t it remarkable that we have never been able to set an equivalent standard for monetary value? Some 180 currencies are currently being used around the globe, most of them floating haphazardly against each other.

Efforts to  establish the metric system for weights and other measures go back to the late 1700s. At the same time that scientists and policy makers were working to get the world’s nations to use metres, kilograms, and the like, they were also trying to do the same with money. This post will be about an ambitious effort to create an international system of monetary measures in the 1860s and 70s, and its failure.

One of the first efforts of monetary standardization was the Latin Monetary Union, or LMU. In December 1865, Belgium, France, Italy, and Switzerland all agreed to abide by the convention monétaire, or what was derisively termed the LMU by the English press. Prior to the deal being struck, Italy, Belgium, and Switzerland had already begun to issue their own local versions of the French franc. For instance, Italy’s lira – introduced in 1862 – was of the same purity and weight as the French franc. The LMU formalized this relationship by, among other measures, committing each government to accept the others’ coins at par in payment of taxes and other dues.

Citizens of France were welcome, but not obliged, to accept Swiss, Belgian, or Italian coins, and vice versa. The poster below helped locals to know which gold and silver coins were issued by LMU members, and which were foreign and thus not acceptable at the state tax office.

To help deal with a confusing number of coins, this 1880 poster helped people living in the Latin Monetary Union know which to accept or refuse. The LMU (1865-1926) was comprised of France, Italy, Greece, Belgium & Switzerland.
Source: https://t.co/KkdXjeH0aF pic.twitter.com/DM24fV1KAk

With the LMU establishing a common coinage standard across a large part of Europe, why not expand the standard? Paris would be hosting the World Fair in the summer of 1867. With so many people in attendance, it was decided to host a monetary conference with the view of “promoting the uniformity” of coins. The conference was attended by representatives of twenty different nations, including United States, France, Great Britain, Russia, and Turkey.

In the document emerging from the conference, delegates agreed that without a common system of coins, business between nations would be forever burdened with the costs of converting from one type of coin to another. This could be solved by introducing into each nation a “point of common contact,” specifically a gold coin that was to be of uniform weight and purity. These common coins could be used in each nation, thus ending the need to constantly convert from currency to currency as one crossed borders. Taking a page from the LMU, conference delegates supported the five franc gold coin as the universal coin on which to model all other coins. In addition to creating a common coin, it was also agreed that national governments would accept each others coins as legal tender.

Governments needn’t actually issue french francs, of course. They could add their own emblem and denomination as they pleased, but would be encouraged to add the relation between its value and that of the five franc piece.

The difficulty of standardizing coins

There were several significant hurdles in the way of establishing an international coin standard. Getting the Brits and Americans on side was important, given how sizable these nations were. The problem is that one British pound, represented by the gold sovereign, was worth 25.22 francs, as illustrated in the table below. This was hardly a convenient ratio for establishing a “point of common contact.” Either the franc would have to have a bit of gold added to it to bring the ratio to an even 25 francs to the pound, or the pound would have to have a bit of gold removed.

With the conference having established the franc as the universal standard – the reasoning being that the franc circulated more widely than the pound – it was the Brits who were called on to make the adjustment. By reducing the gold content of the pound by 0.88%, one British pound would now conveniently be worth 25 francs.

The same problem characterized the ratio between the U.S. dollar and the French franc. A franc was worth $5.18 (see table above). To bring the dollar into alignment with the franc, 18 cents worth of gold would have to be removed from the dollar, or 3.5%.

A set of U.S. dollar proofs, or sample coins, were created to capture the essence of this small alteration. The coin below successfully lives up to the spirit of the 1867 conference by establishing a clean US$1/5 franc exchange rate and illustrating both the local dollar as well as the universal franc on the obverse side.

The French had their own coin created to capture the spirit of the conference, with the face of Napoleon III instead of Liberty.

Meanwhile, on the British side, Thomas Graham, Master of the London Mint and a British delegate to the 1867 conference had the following proof minted.

Graham’s coin also conformed to the strictures of the 1867 conference. It listed both the local currency value, the British double florin (1/5th of a pound), as well as the franc.

For both the U.S. and U.K., redefining their currency was a big step to take. Each nation’s existing coins would have to be called in and remade to the new and lighter standard. Secondly, all existing American and English debts – which had been based on dollars and pounds of a certain gold content – would have to be renegotiated to account for a lightening of the standard. For instance, a legacy $50 obligation would have to be recognized as a debt of $51.75 using new coins. That way a creditor was assured of getting the same amount of physical gold as before.

In the U.S.’s case, the change would have been easier to pull off. It was already at that time on a fiat standard anyway. In 1861, greenbacks had been declared irredeemable. Since then, $1 worth of greenbacks was worth a fraction of $1 in gold coin. Imposing a new coin on Americans, and requiring that all debts be re-denominated by 3.5% would be less of a nuisance in what was an already chaotic system. Indeed, John Sherman, the powerful chairman of the Senate finance committee, nonchalantly wrote that since “contracts are now based upon the fluctuating value of paper money, even the reduced dollar in coin will be of more purchasable value than our currency.”

Matters in the UK were more complicated. First, some background. Coins are more useful than raw bullion. They can be passed quickly from hand to hand whereas an equivalent amount of bullion needs to be weighed or assayed by whoever accepts it. Because these services are valuable, people generally put a premium on gold coins relative to an equivalent amount of gold.

For centuries, however, the UK supplied these services for free. Anyone could bring some gold or silver into the mint and have it converted into an equivalent amount of coins without having to pay a fee. Since English mints imposed no fees, an English coin that contained 10 grams would always have the same market value as 10 grams of raw gold. Were the coin to be worth more than that, a trader could quickly arbitrage the difference by purchasing raw gold, bringing it to the mint and having it turned into coin for free, pushing the premium back to zero.

If the mint charged a fee, however, coins would be worth more on the market than an equivalent amount of raw gold. After all, melting down a coin meant that one had to pay a fee to turn the bullion into useful coin again.