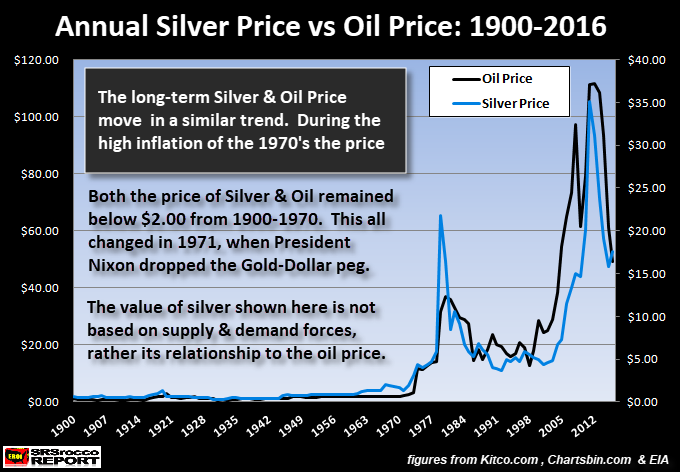 Even though interest in precious metals has fallen over the past few years, investment demand is still the largest growth sector in the silver market.  Yes, it may be hard to believe, but physical silver investment has grown the most since the 2008 financial crisis compared to the other sectors.  And while industrial users consume the highest amount of silver in the overall market annually, its total demand has fallen over the past decade.

Furthermore, a new study shows that global PV solar demand will decline by 40% over the next five years.  But, I will get to that later in the article.  However, I wanted to focus on physical silver investment demand because the alternative media community seems to have this idea that SILVER IS DEAD… IT’S NOT.  While it’s true that investment demand has declined significantly from the peak a few years back, it is still much higher than what it was before the 2008 financial crisis.

Interestingly, silver coin bar and coin demand seem to spike the most when prices are falling rather than when they are rising.  This was true in 2015 when total global silver coin and bar demand hit a record high of 292 million oz (Moz) as the silver price fell to a low of $15.68 versus 161 Moz in 2012 when the average price was $31.15: 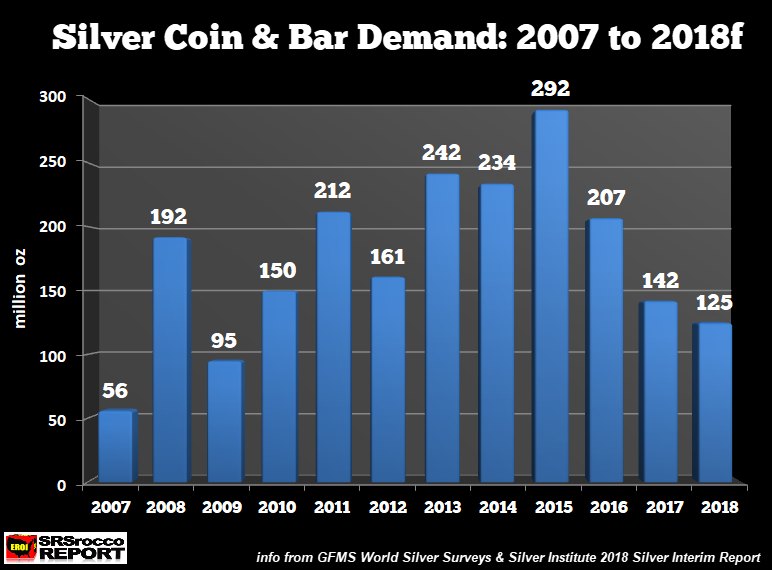 Now, according to the Silver Institute’s Interim Report, total coin and bar demand will fall to 125 Moz in 2018, down from 142 Moz during the prior year.  So, even though physical silver investment demand is down more than half of what it was at its peak in 2015, it is significantly higher than what it was in 2007, before all hell broke loose in the financial system and economy.

Looking at the data from prior World Silver Surveys (found at the Silver Institute), coin and bar demand ranged from 50-60 Moz during 2000-2007.  However, things got really interesting in the silver market when the priced jumped to $20 in 2008 on the back of a disintegrating banking and housing market.  Silver coin and bar demand more than tripled in 2008 to 192 Moz.

But, in 2017 and 2018, the ongoing low prices saw global silver coin and bar demand fall to lower levels as investors focused on the more volatile broader markets, Bitcoin and the Cryptos.  Nonetheless, I believe life will return back into the precious metals in 2019 as FEAR ENTERS into the market.

As I mentioned, physical silver investment demand is the largest growth sector in the entire market if we use the 2008 financial crisis as a guideline.  Silver coin and bar demand it has increased 123% from 56 Moz in 2007 to 125 Moz forecasted this year (Thomson Reuters GFMS Team).  Now, the only other sector that has shown an overall increase in the same period is silver jewelry demand which grew 8% versus an 11% decline in Industrial usage followed by a drop of 8% in the silverware sector: 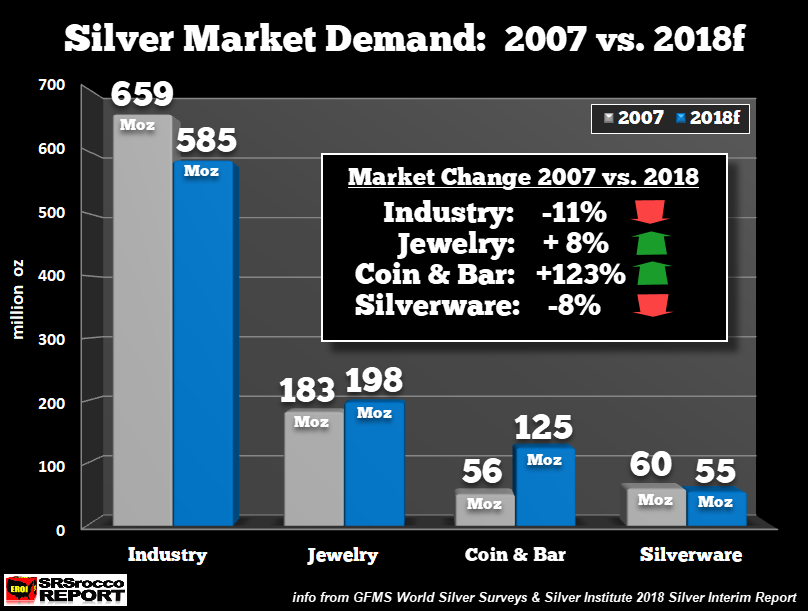 That being said, silver industrial demand is likely to continue contracting as oil production peaks and declines.  Even if we disregard falling oil supply and its impact on the overall market, a new study titled The Role Of Silver In The Green Revolution (for the Silver Institute), states that silver demand in the PV Solar Industry is forecasted to decline by 40% by 2024: 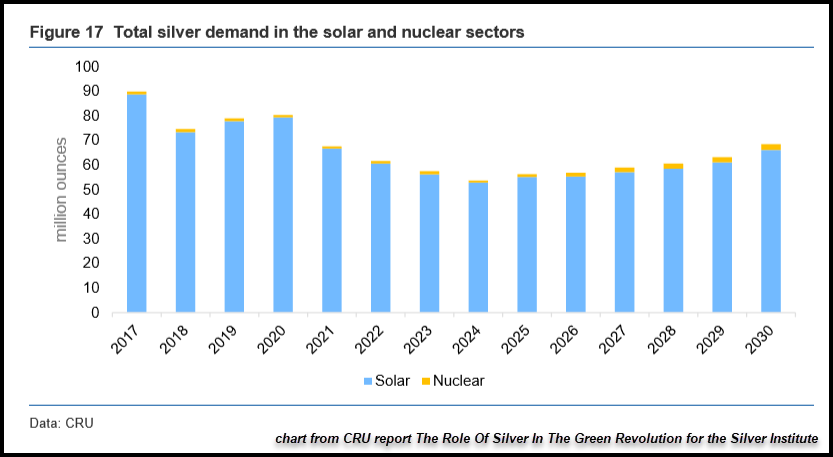 Not only is PV Solar silver demand to fall considerably this year compared to the nearly 90 Moz in 2017, but the CRU Report also forecasts that it will continue to decline to approximately 50 Moz by 2024.  I gather we can now dismiss all the supposed notions of massive increases of Solar PV silver consumption in China and throughout the world.  Actually, I believe Solar PV installations will begin to decline considerably as the market realizes it’s too expensive and its very low EROI – Energy Returned On Investment will not provide the Green Energy future as planned.  One more thing, the more PV Solar Plants that are added to the grid, the more balancing power that needs to be added to offset the huge drop-off at night when the sun isn’t shining.  Very few people realize the huge problems associated with adding Solar to the Electric Grid.

In my ongoing research, I have found out that supply and demand forces are not good primary indicators of the silver price.  Part of the reason that supply and demand fundamentals play less of a role with silver has to do with the 2.5+ billion oz of custodian silver metal stored in vaults across the world.  Moreover, as I stated, the highest demand for physical silver coin and bar demand of 292 Moz in 2015 was due to 50% REDUCED PRICE SALE compared to 2012.  So, there are very complicated factors driving the silver market.

My newest analysis of the Day Trading Markets has brought a new understanding of what GUIDES THE MARKET PRICE of stocks, commodities, metals, etc.  However, the COST OF PRODUCTION is the overriding factor that provides a FLOOR in the price of most things.  I am not saying this is 100%, but production costs are the leading indicators of price when all things are equal.  And by that I mean, when the market is balanced, the cost of production is the normally the floor price upon which supply and demand forces react.

Let me give you an example.  If we look at the financial statements of most companies, they are all making a small percentage of profits once we account for ALL COSTS.  So, if a company like Caterpillar is manufacturing and selling Earth Moving Machines for the market and they are making about a 5% profit (give or take), then the total cost of that machine they sell becomes the 95% of the market price.  It’s really that simple.

Now, of course, Caterpillar isn’t going to manufacture and sell ten times more machines in a given year than the market demands as that could depress prices.  Furthermore, their financial constraints (small annual profits) KEEPS them from manufacturing too many machines because they just don’t have the extra money or available low-cost credit to do so.  So, the market is kind of self-regulating when we consider supply and demand forces.