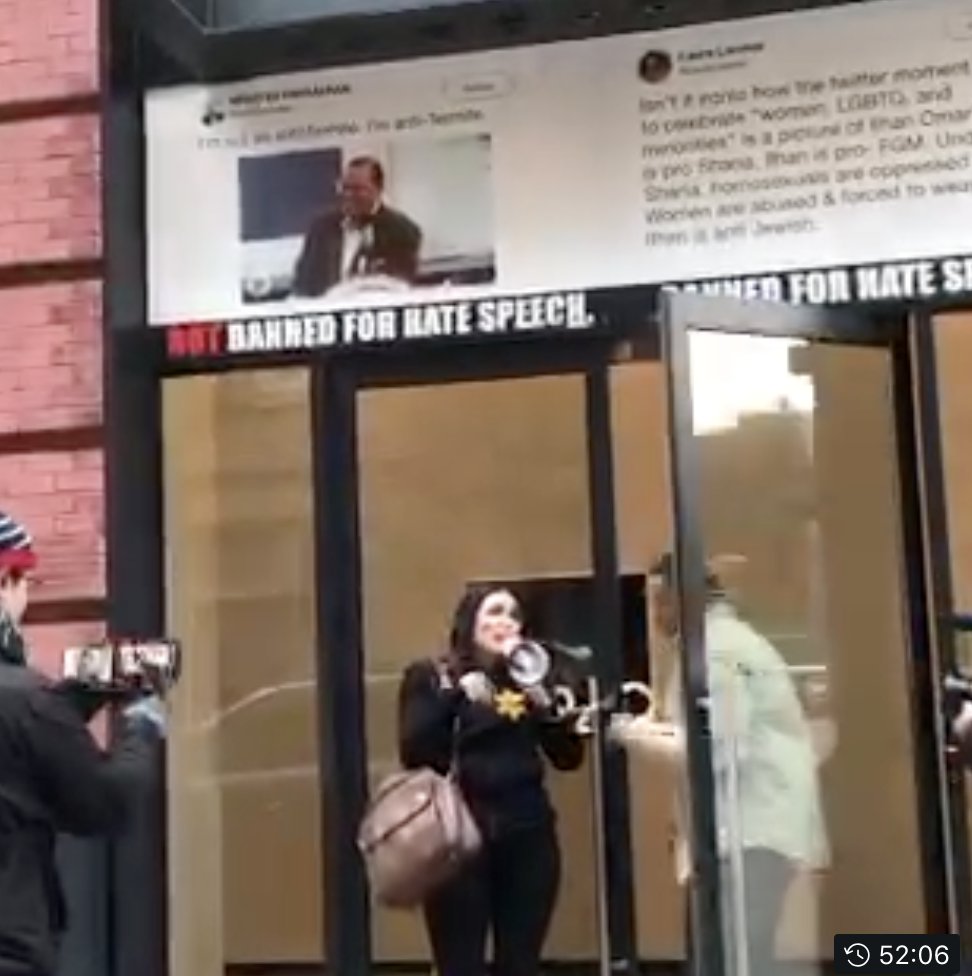 While a crowd gathered, some mocked her while others praised her courage.

Investigative journalist Laura Loomer handcuffed herself to the office doors of Twitter in New York on Thursday to decry the blatant censorship by the social media outlet.

In a video posted online that runs almost 2 hours, Loomer and several of her friends can be seen attaching a sign with enlarged tweets over the door as she handcuffs herself to the door.

The sign enlarged and compared two tweets:  One by Nation of Islam leader Louis Farrakhan and the other by Loomer, for which she received a permanent ban.

The Louis Farrakhan tweet stated, “I’m not anti-Semite, I’m anti-termite,” which was a reference to a comment he made earlier this year with reference to Jews.

Of course, Loomer, who is a Jewish girl, took issue with that, but what exactly did Loomer post that got her banned?

In the tweet in question, Loomer called Omar “anti Jewish” and a promoter of Sharia law, and said she is a member of a religion in which “homosexuals are oppressed” and “women are abused” and “forced to wear the hijab.”

This is the tweet that Loomer blew up and put on Twitter’s building.

She wrote underneath it: “NOT BANNED FOR HATE SPEECH.”https://t.co/vK5O0fLQ0y

Here’s a close up of the tweet of hers that she blew up.

She wrote underneath it: “BANNED FOR HATE SPEECH” pic.twitter.com/vHLORE7XOV

You can see that it appears that someone inside Twitter’s office not only attempts to knock over the ladder holding a man who is attempting to simply stick the sign over Loomer, but comes out and steals their property, a simple handheld sign that was also to be used to protest.

Loomer uses a small bullhorn to make her protest.

While a crowd gathered, some mocked her while others praised her courage.

Then it even went into social media with Ben Shapiro tweeting somewhat in Loomer’s favor.