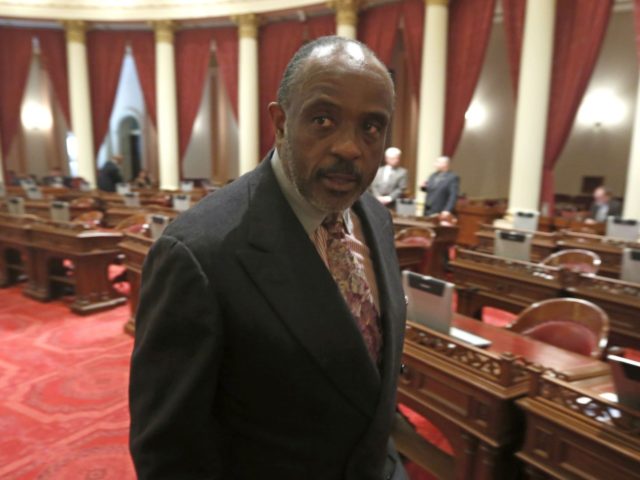 California Governor Jerry Brown issued a pardon Wednesday to former Democratic State Senator Roderick Wright, who lied about living in the district he had been elected to represent and became a symbol of corruption in the state capital.

Wright represented the Los Angeles community of Inglewood, but lived in the more affluent Baldwin Hills. State law requires state legislators to live in the areas they represent.

Democratic State Senator Roderick Wright was sentenced on Friday to 90 days in jail, three years of probation, and 1,500 hours of community service after being convicted on federal perjury and voting fraud charges in January. Wright is also banned for life from holding public office.

While running to represent California’s 25th State Senate district in 2008, Wright lied about his residence to qualify for the ballot, according to the Desert Sun. He claimed he lived in an Inglewood apartment complex within the 25th District, but prosecutors were able to show that Wright’s true residence was a Baldwin Hills home outside the district.

According to the Los Angeles Times, Judge Kathleen Kennedy did not accept Wright’s argument that he had moved enough personal possessions into the Inglewood apartment complex to qualify it as his new home. Kennedy called Wright’s actions “arrogant,” as if he believed “the law doesn’t apply to him.”

Wright was only one of several Democratic state senators in trouble with the law. Leland Yee was caught in an elaborate scheme involving corruption and international gun-running, and Ronald Calderon was accused of bribery, pleading guilty to a lesser charge. Other Democrats also faced criminal accusations.

Democrats, including then-Senate President pro Tem (now Sacramento mayor) Darrell Steinberg, delayed taking any kind of action against Wright, waiting for six months after he was convicted before calling on him to resign.

In his letter of pardon, Gov. Brown — now a lame duck with only weeks left in office — explained his reasons, citing Wright’s political life, including his conviction, as one of the reasons he deserved to have a “full and unconditional pardon”:

He has shown that since his release from custody, he has lived an honest and upright life, exhibited good moral character, and conducted himself as a law abiding citizen. Indeed, Mr. Wright has devoted much of his life to public service, including serving six years in the California State Senate and six years in the California Assembly. Following his conviction, in a bipartisan vote the Legislature enacted Senate Bill 1250 (2017-2018 Leg. Sess.) which clarifies the law regarding the domicile of an elected official. The Legislative history of that bill specifically cited Mr. Wright’s conviction as the reason why clarity in this area of the law was necessary.