The Pope’s Audience Hall building at the Vatican was designed to look exactly like a giant reptile inside and out. When the pope addresses an audience there the effect is that he is speaking from the mouth of a giant reptile. Why on earth would he want to do that?

Let me just start this by saying that, no, I am not signed off on just about any of the various reptilian incursion conspiracy theories floating around the Internet. Most of them are quite silly, though usually amusing. But if you want to talk Bible, where there is a real reptile that presents itself as a dragon with 7 heads and 10 horns, now I’m interested.

“So he carried me away in the spirit into the wilderness: and I saw a woman sit upon a scarlet coloured beast, full of names of blasphemy, having seven heads and ten horns. And the woman was arrayed in purple and scarlet colour, and decked with gold and precious stones and pearls, having a golden cup in her hand full of abominations and filthiness of her fornication: And upon her forehead was a name written, MYSTERY, BABYLON THE GREAT, THE MOTHER OF HARLOTS AND ABOMINATIONS OF THE EARTH.” Revelation 17:3-5 (KJV)

And as fate would have it, that dragon, that ‘scarlet coloured beast’ of Bible prophecy is 100% connected with the Vatican, the pope and the Catholic Church. With that in mind, the fact that the Vatican created a building in the shaped of a giant reptile and the pope gives speeches from the beast’s mouth is off-the-charts interesting.

FROM ARCVISION PRIZE: Commissioned by Pope Paul VI in 1963, the Papal Audience Hall in Vatican City was inaugurated in 1971. Shortly thereafter both the hall and the architect achieved such a worldwide fame that the auditorium came to be called familiarly Aula Nervi. It is one of the last great works of Pier Luigi Nervi, an engineer by training as well as a skilled entrepreneur and unsurpassed interpreter of cement as form and structure for architectural and infrastructural works where it is impossible to distinguish the design project from structural computation.

The complex is located near St. Peter’s Basilica in an area between Italy and Vatican City. The large auditorium, which can accommodate up to twelve thousands people is covered by a double curving parabolic vault that, thanks to its slender bearing structures, makes the big vault as suspended in air and powered by invisible anti-gravity forces.

In order to facilitate the view of the papal throne, even the floor has a double convex curvature. A refined and innovative system for air circulation was installed, consisting of nine channels and placed under the floor, to dissipate the intense heat output of the communication equipment like the lighting systems of TV cameras. The auditorium was built with extensive use of reinforced concrete and a special concrete mix with white marble dust and grit provided by Italcementi. It is characterized by special brightness, both for the ellipsoidal glass wall (built by John Hajnal) and for the vault consisting of variable length corrugated structures and large openings creating an extraordinary luminescent plot. READ MORE

Have a look at the image below and compare its shape to the image of a snake beside it. Note the overall shape — wide back, narrow, rounded front, eyes in the middle, nostril at the front, and curved top. So even from the outside and viewed from the sky, the entire building is a dead-ringer for a snake’s head.

The Papal Audience Hall in Vatican City as viewed from the sky and compared with a reptile.

When the building is viewed from the inside, the unmistakable resemblance to a reptile hits you like a ton of bricks. A ton of dark, evil and very sinister bricks.

The Papal Audience Hall in Vatican City as viewed from the inside and compared to a reptile.

Just when you thought it couldn’t possible get much worse, it does. Way worse. Right behind the pope’s throne, they installed a statue created by Pericle Fazzini in 1977 that purports to show Jesus Christ rising up from an ‘atomic apocalypse’, and looking for all the world like a scene from ‘Night Of The Living Dead’ zombie movie. And if you look closely at the top of the “Jesus” head, you will see something quite interesting indeed. 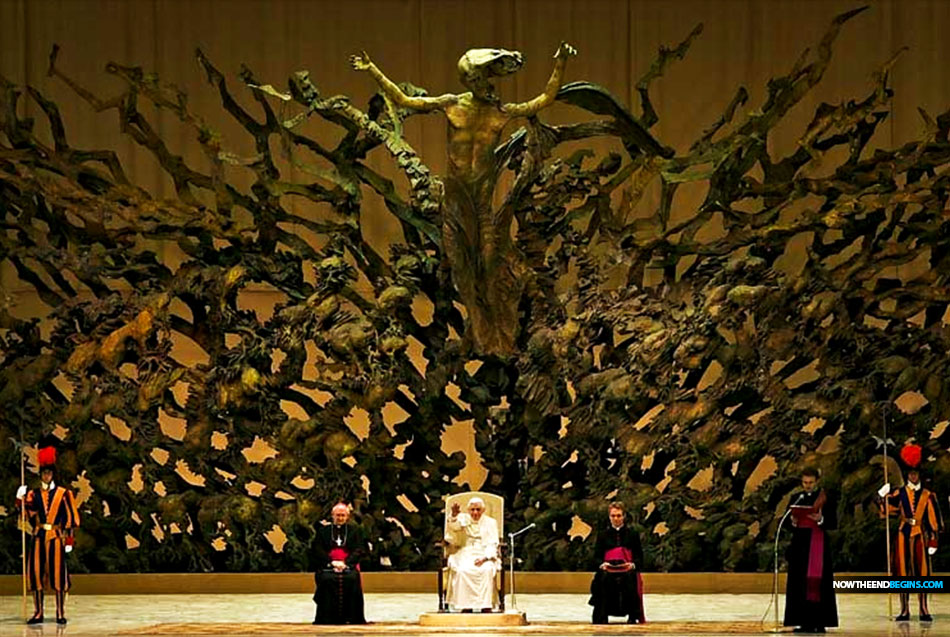 You will notice that the “head of Jesus” has his hair blowing in the breeze or some such thing, but if you look closer it is more than that. The head of Jesus is turning into…(anyone care to hazard a guess here?)…a reptile. What is the importance of that? Well, you read this verse and then you tell me what it means.

“And the LORD God said unto the serpent, Because thou hast done this, thou art cursed above all cattle, and above every beast of the field; upon thy belly shalt thou go, and dust shalt thou eat all the days of thy life: And I will put enmity between thee and the woman, and between thy seed and her seed; it shall bruise thy head, and thou shalt bruise his heel.” Genesis 3:14,15 (KJV)