I wish it wasn’t so, but as you can see, the worlds in a bit of a mess right now and as we approach the mid-terms, I think all manner of hell is going to break loose.

I expected some pushback to the article I wrote on Sunday, where I mentioned my opinions concerning the leftist attack on Brett Kavanaugh, and how disgusted I was with the whole thing. Interestingly, my in box was considerably quieter than I expected, with just a handful of people suggesting I support rapists, and hate women, etc. Obviously I support nothing of the sort, I was simply pointing out that this had nothing to do with Ford, this was an all out attempt to stop Kavanaugh from getting to the bench.

The following was reported by fox news, MSN, and others: In a social media post on Saturday, a writer for CBS’s “The Late Show with Stephen Colbert” seemingly celebrated the damage done to Supreme Court Justice Brett Kavanaugh’s reputation during his bruising and bitterly partisan confirmation battle.

“Whatever happens, I’m just glad we ruined Brett Kavanaugh’s life,” the writer, Ariel Dumas, posted on Twitter. Dumas later briefly made her account private, preventing others from viewing her posts without her approval.

A lot of people, from the President on down, has said that they’re actually scared for young men today. If someone can crawl out of the woodwork from 35 years ago, with no corroborating witnesses, and ruin your career, and possibly your family, it truly is scary. And the question I have is, how many men’s lives have been ruined by females with an agenda? I bet it’s a staggering number. Yet because of pride or embarrassment, most men will never tell their story either.

So I want to tell you a story. If you don’t know, I started my adult life as a jeweler. I don’t know why I was so attracted to the mechanics of watchmaking, or the sparkle of precious stones, but I was. I went to trade school for 3 years, focused on watchmaking, clockmaking, jewelry design and repair, and appraisals.

When I got out of school I had two immediate job offers, one as a bench jeweler doing repairs and one as a watchmaker doing repairs. The jeweler position was paying about 30 dollars a week more, so I took that. Don’t forget we’re talking about 1980.

It’s hard to be proud of yourself without sounding pompous, but the fact is that I turned out to be a very good jeweler. I just had a good gift towards making complicated repairs, many of which other jewelers couldn’t do. When I opened my own repair shop, a large portion of my work was repair work that other jewelers brought to me, because they simply couldn’t do it.

At one point, I was doing the sizing and repairs for 11 local stores, and the branch stores of two major national companies. The volume of work from the one national discount store was substantial. They had a jewelry department that was selling over 2 million dollars per year. That’s a lot of rings to be sized, a lot of bracelets to cut to size, a lot of walk in repair work.

I would pick up all their work on Monday afternoon, as most of their sales came in Friday night, and Saturday/Sunday. Then I’d work on the pieces and deliver the finished goods on Friday.

I was a young twenty something single guy. So when I’d pick up or deliver, I would often flirt with the counter girls and try and make them smile a bit. Then I’d put on my business face, and go to the Department manager to do the paperwork and invoicing for the work I did, and pick up the new work.

One day, right after exchanging the paperwork and jewelry, this particular female Department manager grabbed my arm and said “every week I see you come in here and have fun with the girls. Why don’t you ever come over to me and have fun?”

It caught me off guard, but I told her the truth “ I fool around with the floor gals because they’re all youngsters like me. I know how difficult it is dealing with the public and it’s fun to share some laughs. But you’re management, a bit older, and we’re doing business. I didn’t think it right to play silly with you.”

She almost sneered at me and said “No, you don’t come flirt around with me because I’m fat. All those girls are pretty and I’m not.”

I didn’t know what to say. It was like a punch in the gut. If she wasn’t the boss of that store, often handing me work worth a thousand dollars in a week, I’d have been saying goofy things to her too. But this was a major account, and acting the fool with someone connected to “corporate” simply didn’t make sense.

I said something along the lines of “I’m sorry you feel that way, but your looks aren’t really the reason I don’t fool and kid around with you. We do a lot of business together and it wouldn’t seem right to act like a college kid to you”.

It didn’t matter. I could have told her that I thought she was the hottest most desirable gal in NJ, her mind was made up – Bob kids around with the pretty young girls and doesn’t flirt around with me because I’m fat and not terribly pretty.

And so it started. Within a week I got a call from Corporate that the level of my work had dropped. My repairs were getting sloppy, and I’d best fix it. Nothing of the sort had actually happened. I was always proud of my work, and if anything I paid even more attention to anything I got from them.

What was happening is that the Department manager gal, was telling her home office that my work had gone to hell, and maybe we need to find a different jeweler.

Well it worked. She eventually got me “fired” despite me ending any flirting with the counter girls, and making sure anything I did for their store was A-1 work. Over and above good work. I lost the single biggest customer I had to date.

On the last delivery of their goods back to their store, I will never forget what happened. A young girl named Bonnie walked up to me as I was leaving and said “That witch has had a crush on you since the first day you came in here last year. You didn’t give her the time of day, and she’s hated you for it ever since”

And there it was. I lost the biggest customer of my young life BECAUSE I DIDN’T make passes at the boss. The worst part was that had she been just one of the floor gals, I’d have included her in my goofy antics, despite her looks. Likewise, if in her position as “boss” she was the most gorgeous “centerfold” material one could dream, I still wouldn’t have flirted with her. She was in a position of power, and I wouldn’t have jeopardized our business deal, to act the fool.

Was that fair? Nope. What was I supposed to do, call their Corporate office and tell them that that only reason she mounted these attacks on me was because I didn’t act like a college frat guy to her? 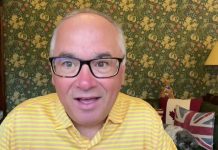 The IMF’s Blueprint for the Globalists’ Economic Takeover.

The 2020 Presidential (s)Election is Underway with Kamala Harris as Soros’s Pick!!!