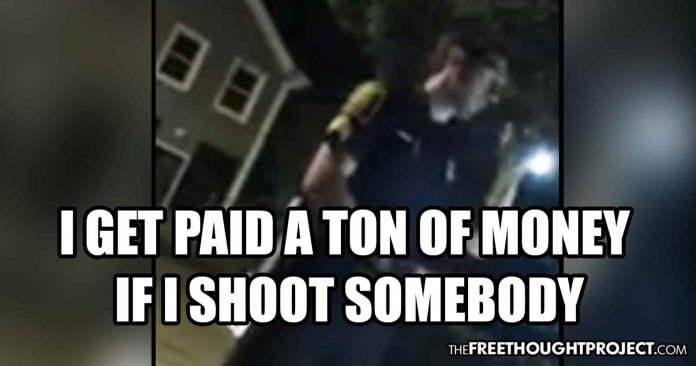 A cop has been fired after he claimed he was “trigger happy” and admitted that if he shoots someone he “makes a ton in overtime.”

Hartford, CT — (RT) A Connecticut police officer who warned suspected trespassers not to run because he felt “trigger happy” has been fired from the force after video footage revealed him saying that he gets paid overtime if he shoots someone.

Hartford police officer Stephen Barone was involved in what appeared to be a routine incident last August in which he stopped a group of males suspected of trespassing on private property. But things took a sinister turn when Barone was also heard boasting that if he shot someone he would be paid overtime.

Barone’s conduct was called into question when footage of the incident also showed him warning the suspects that he was “trigger happy.” Officer Barone has now been relieved of his duties, Hartford chief of police David Rosado confirmed.

In a statement, Rosado suggested the 10-year veteran had tarnished the police department’s relationship with the community.

“Every day, the men and women of the Hartford Police Department are out doing good police work with professionalism and respect, and this officer’s conduct does not reflect the values of our agency,” Rosado said.

In the three-minute video, which appeared on social media last August, officer Barone can be seen attempting to solve a potential case of trespassing. The cop asks the men if they have any drugs or weapons and then also warns them not to run because he is “trigger happy.”