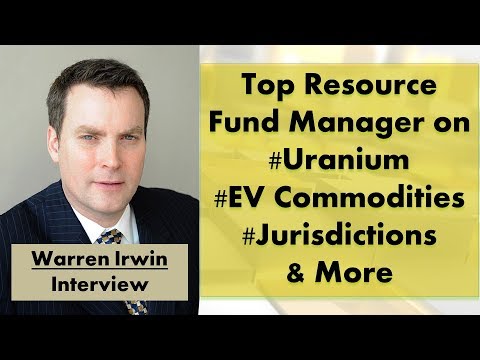 1:58 Top commodities for the EV revolution

8:28 Warren’s thoughts on the USA as a mining jurisdiction

10:40 Warren’s thoughts on British Columbia as a mining jurisdiction

11:40 What are some overlooked mining jurisdictions to pay attention to?

19:59 Commentary on M&A activity in the mining sector & its significance

Bill: You are listening to Mining Stock Education. Thanks for tuning in. I’m your host, Bill Powers, and I’m back in Toronto for the Mines and Money Conference and I’m sitting down with top performing funder manager, Warren Irwin. When I interviewed Warren last at PDAC in March of this year, that was one of the interviews that got the most positive feedback. And so, Warren doesn’t do too many interviews, but I reached out to him again and asked him if he would sit down, take some of my questions and also answer some of the questions that some of you emailed in. So Warren, thanks for sitting down again.

Bill: So did I. It was, like I said, very well received and there was a lot of online engagement regarding it. Let’s start off with this first question. As you look at the electrical vehicle revolution, what are your top commodities to play and are there any specific companies you’d like to mention?

Warren: Okay. Well, one thing I like when you take a look at electrical vehicles, you have to look at what’s gonna take to build them, what’s gonna take to build the grid to power them, and how are you gonna power them? Let’s start upstream a little bit with the power. I’m not a believer in solar or wind because there are dark nights, happens every day so solar doesn’t work at night. Also with respect to wind, I’m not a big fan of wind, right now, it’s heavily subsidized, and I’m not a fan of any of that stuff. And we basically need good long-term, steady-eddy power generation. The only way that’s being done is with hydro, and with uranium, and obviously coal. Coal is a non-starter going forward. Too many people are dying from the health effects of it. We’ve dammed up all the rivers and that’s obviously a shame, but hydroelectric power is a great source of power.

I’m a huge fan of nuclear, especially not only the ones that they’re building today in China and how they’re reducing their reliance on coal but really, I’m really excited about the future for nuclear, and especially the Gen IV nuclear reactors are modular. They’re fail-safe and they’re really…with the modular nature of it, it brings down the cost of it. And with respect to already being…the fuel being liquefied form, it eliminates meltdowns so it is a fail-safe. So I think it’s an exciting future in nuclear power. I think nuclear power will be the answer that everybody will eventually come to. So I’m a bit of a bull here on uranium. When you take a look at the grid and obviously, building the cars, you’re gonna wanna look at something as simple as copper. I’m a fan of copper obviously. All the major copper companies are looking for new copper assets, seeing what’s coming down the pipe.

When you take a look at specifics with respect to batteries, I’m not a big fan of lithium. I believe the current producers can produce all the lithium we need. There’s no shortage of lithium in the world. Whereas, you know, finding a big copper porphyry that’s…being able to mine profitably is quite difficult still. When you look at more specifics, let’s say cobalt and nickel.  Cobalt, there is substantial political risk in cobalt, given a lot of it or the majority of it is sourced in the Congo. So I think over time, the battery producers will substitute cobalt. And also with respect to nickel, nickel is a pretty tough one to find, but once the price goes up a bit higher, some of these laterites will be able to supply a lot of the nickel needed. So I’m a huge nickel sulfide fan, but those again are very, very rare beasts to find. So nickel sulfide, if you look in summary, what I like is nickel sulfide deposits, good quality copper porphyries in good jurisdictions. And I like uranium to power the whole system, and I think that’s sort of how I’m positioning myself.

Bill: For investors that are looking at uranium equities or investing in them, some juniors have gone up five-fold, I’ve observed in about the last four months. What cautionary advice might you give some uranium junior investors right now?

Warren: Yeah. You know, I’ve watched a a few boom-busts here in the uranium cycle. The most important thing is at the end of the day, the vast majority of them…in fact, almost all of them will not become mines. So if you think you’re a long-term investor, you wanna be like Warren Buffet, you don’t wanna be like Warren Buffet in the uranium sector because a lot of these ones you think are the biggest and best and they’re the greatest, they will not be mines. And that’s why I’m sticking with a more conservative play and playing NexGen ($NXE). As you know, I was an early backer of NexGen when they made the discovery. I saw how big and rich it’s gonna be. It’s a tremendous discovery. And when you look at what they can produce, if you’re looking at a market where primary mine productions are 150 million pounds and you’re looking at one player that could generate one-fifth of that from its mine, you almost wonder if there’s much room for some of these juniors that are out there spending money finding uranium.