‘It’s time we wake up, expose them, stand up and fight for our country, because that’s what’s at stake here’

With the confirmation of Judge Brett Kavanaugh to the US Supreme Court in the upcoming days looking more and more like a sure thing, we take a look at this new story from Zero Hedge in which they report that according to Georgia Republican Senator David Perdue, Republicans should ignore all of the protests happening surrounding Kavanaugh because many of the protesters are just doing their jobs as paid employees of George Soros-tied nonprofit organizations.

While the mainstream media is quick to shoo away any ties between Brett Kavanaugh’s accusers and anti-Kavanaugh protesters and George Soros, with snopes labeling Soros-funded protests as ‘conspiracy theories’, the attempts to assassinate the character of Brett Kavanaugh have shown America what the ‘bottom of the barrel’ looks like on the Democratic side of the aisle and as Senator Perdue tells Laura Ingraham of Fox News in the only video below, he is absolutely pissed off about what America has been witnessing.

Coming straight out and calling the tactics of the Democrats in 2018 comparable to the tactics used by the ‘Brown Shirts’ of Germany in the 1930’s, Senator Perdue says what Americans need to hear in 2018 with America torn apart and starving for truth, truth that the mainstream media refuses to give us.

UPDATE: President Trump has just called out Soros on twitter, too!

And as we’ll see within this ANP story, while globalists snopes and the mainstream media call paid anti-Kavanaugh activists ‘fake news’ or a ‘conspiracy theory‘, a quick visit to websites such as Craigslist or the City Paper franchises find TONS of well paid positions for leftist causes. First, from the Zero Hedge story:

While the mainstream media has overlooked the fact that the two “hero” survivors who berated Arizona Senator Jeff Flake into calling for a one-week extended FBI background check were paid activists working on behalf of a nonprofit organization funded by George Soros, one Republican Senator brought up that fact during an interview with Laura Ingraham’s radio show.

Louisiana Republican Senator David Perdue argued that Republicans should ignore these protestors who have a clearly partisan agenda and instead should “grow up and start playing defense,” the Hill reported.

“These are not genuine people who are concerned about Dr. Ford or anything else, these are paid activists,” he said. “This is a George Soros conspiracy, and it’s time we wake up, expose them, stand up and fight for our country, because that’s what’s at stake here” Perdue added, referring to the billionaire activist who has donated to liberal social causes. 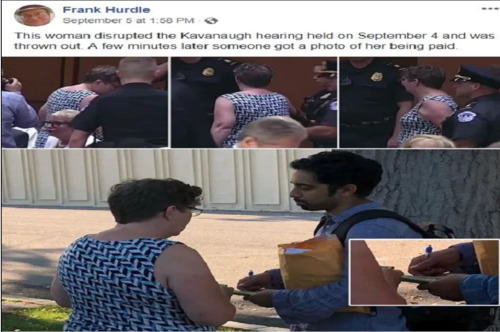 While globalist debunkers snopes also claimed that protesters being paid to disrupt the Kavanaugh confirmation hearings last month was ‘misleading information’ and the photos above of a protester getting paid led to harassment and death threats against those who were photographed, even snopes couldn’t get away from the fact that these photographs did not lie though they attempted to sugarcoat the reality.

As Snopes reports, it’s true, an activist is getting paid money, but according to them, it was to help them pay ‘related fees‘ in case they were arrested. Anybody else’s BS detector thundering? From the snopes story saved over at archive.:

While it’s true the photograph indeed shows Lampron being given money, she wasn’t being paid a fee in exchange for protesting. The man wearing a backpack in the photograph is Vinay Krishnan, a consultant who helps organize legal support for the progressive activist organization Center for Popular Democracy (an organization that has been heavily involved in organizing protests against Kavanaugh’s confirmation).

Krishnan told us the money was raised via small donations from around the country, and protesters were given about $35 to pay related fees in the event they were arrested; if they weren’t arrested, the money was to be returned.

“These protesters are coming from across the country believing they are fighting for their very right to exist in this country,” he told us. “That’s why they’re there. Not for $35 which they returned immediately if they didn’t give it to D.C. Capitol Police.” 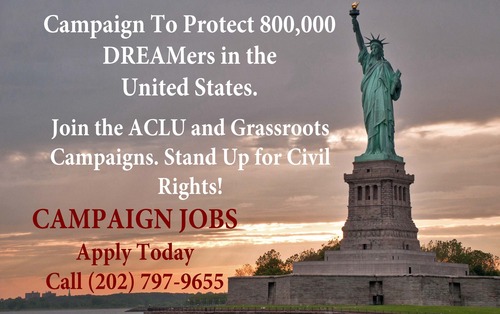 And as we see in the following sections, the jobs available to help push leftist causes are all over the place, especially in the Washington DC area but as has been documented before, such ‘positions’ can be found all across America. 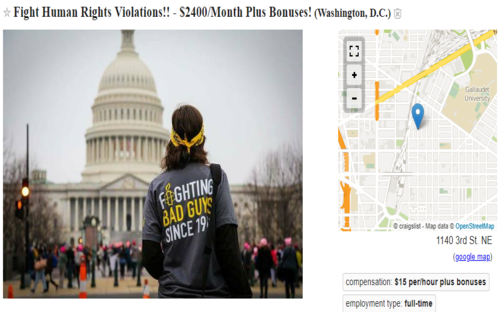 While some might attempt to excoriate us as being against human rights, as most ANP readers know, nothing can be further from the truth. As we had reported on ANP just days ago in our story titled “This Is How The United Nations Is Working To Complete The Destruction Of America And Is Behind The Mass Censorship Of Conservatives“, there is a HUGE difference between the God-given ‘human rights’ that we live under as Americans, rights that are merely supported and protected by the US Constitution, and the United Nations version of ‘human rights’ that Democrats and globalists are trying to push onto Americans and the internet.

As has been well documented, even within the United Nations own literature, the ‘human rights’ of the UN that the globalists are trying to push upon Americans are ‘rights’ that can be taken away by government. They are also ‘rights’ that can’t be used against said government. So when UN ‘peacekeeping troops’ barge into a country, assaulting and raping innocent young girls and women and brutalizing other residents, there are no repercussions against them.