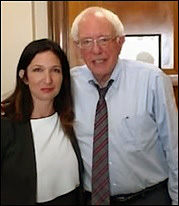 Last week when Senator Bernie Sanders introduced a new banking bill to break up the mega banks on Wall Street, he had this to say: “In our nation today, we are moving toward an oligarchic form of society where a small number of very wealthy individuals and large corporations have enormous control over our economic and political life. Today, we are in a country where three people, three of the wealthiest people, own more wealth than the bottom half of American society and 52 percent of all new income is going to the top 1 percent.” Sanders made this statement on October 3.

Just three days later, on October 6, a thoroughly discredited nominee for the U.S. Supreme Court, Brett Kavanaugh, who had the financial backing of a front group funded by billionaires Charles and David Koch, Americans for Prosperity, was installed on the U.S. Supreme Court. This marked a new milestone for the oligarchs. There was no longer any need to mount even a pretense of representative government. Kavanaugh’s confirmation was opposed by 2400 law professors from a wide array of universities; the National Council of Churches, which represents 100,000 congregations and over 40 million individuals; former Supreme Court Justice John Paul Stevens; and tens of thousands of Americans who protested in cities across the U.S.

As Kavanaugh’s lies under oath to the Senate Judiciary Committee became clear, a White House operating under its own free will would have quickly withdrawn Kavanaugh’s nomination. But instead, the Trump administration, filled with lawyers from Koch Industries’ law firm, Jones Day, doubled down on the nominee. Koch Industries is a fossil fuels conglomerate and Kavanaugh has auditioned well in his appellate court decisions for the fossil fuel industry’s desire to see greenhouse gas emission standards gutted.

Sanders’ Senate bill, which has a companion bill introduced in the House of Representatives by Democratic Congressman Brad Sherman of California, would cap the size of the largest financial institutions so that a company’s total assets are no more than 3 percent of U.S. Gross Domestic Product (GDP), or about $584 billion. Mega Wall Street banks currently have in excess of a trillion dollars in assets. Under the bill, six of the largest Wall Street banks would be broken up: JP Morgan Chase, Bank of America, Citigroup, Wells Fargo, Goldman Sachs and Morgan Stanley. The bill would also impact mega insurance companies, which are counterparties to Wall Street’s derivatives, such as Prudential Financial, MetLife and AIG. As Wall Street On Parade has previously reported, these interconnected financial relationships pose a potential nightmare scenario in the next Wall Street implosion.

Whether it’s oligarchs rigging capital formation on Wall Street, or oligarchs stacking the highest court in the land, or oligarchs using the Federal Reserve as their personal ATM machine, the democratic underpinnings of America are facing the greatest peril in modern history. Wall Street veteran and brilliant author, Nomi Prins, explains what’s at stake for the average American in the video below.