by Roger Stone, The Gateway Pundit: 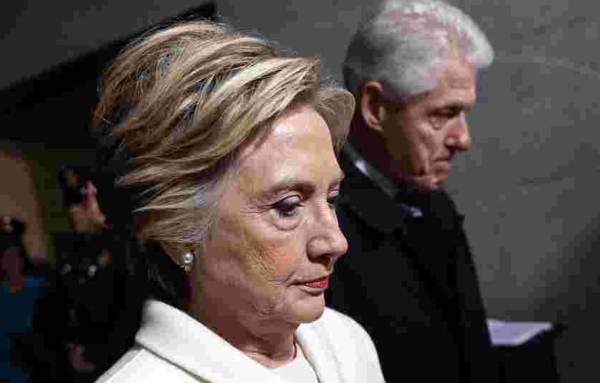 There is a line in the Freenauts catchy music video “Justice for Danney Williams“ a ballad about Bill Clinton’s abandoned African-American son who was banished by Hillary. “Why you always lyin’?” goes the refrain. Indeed it is the central question about Hillary Clinton.

First it is important to note that Bill’s relationship with women has nothing to do with infidelities or indiscretions but rather a well-established series of brutal sexual assaults where he has raped, assaulted, bitten or exposed himself to at multiple women. I detailed these in my best-selling book’ “The Clinton’s War on Women”

First Hillary try to excuse bills behavior as saying “it was a long time ago“ as if that excused his deviance. Now she claims that Bill’s consensual abuse of Monica Lewinsky was not an abuse of power because “Lewinsky was an adult. This woman is delusional.

David Brock, hardly a critic of the Clintons says in his book “The Education of Hillary Rodham“ that it was Hillary who hired the heavy-handed private detectives and nasty lawyers to conduct a veritable terror campaign to silence the women Bill had sexually assaulted. Larry Nichols, a one -time aid to the Clintons has written that Hillary scoffed at Bills victims as “white trash” and chortled that “no one will believe them.

My book The Clintons’ War on Women documents former President Bill Clinton’s trail of sexual assault and rape and Hillary’s role in running the campaign to discredit and bully Bill’s victims into silence lest they slow the Clintons’ path to power and wealth.

My book is not about Bill’s consensual sexual affairs, girlfriends, mistresses, or one night stands. The sordid true story is far darker than that. It details Bill Clinton’s repeated rapes and his proclivity to bite the upper lip of his rape victims as both a signature disabling move and a clear bid to keep their mouth shut.

Hillary has from the beginning run the Clinton spin machine which sought to denigrate and discredit Bill’s victims and claimed women were being paid to lie about being Bill’s victims. Meanwhile the heavy- handed private detectives hired by Hillary and Vince Foster waged a veritable reign of terror on Bill’s “vics”– breaking in and ransacking their homes, snatching or killing pets, tires nail-gunned, and their children threatened. “Marilyn got snuffed” one of Bill’s rape victims was told by a Clinton goon.

In her chilling interview with NBC’s Lisa Myers, Clinton campaign supporter Juanita Broaddrick said Bill attacked and raped her on April 25, 1978. Clinton raped Broaddrick in a Arkansas hotel room and bit her upper lip so badly it was nearly severed. Broaddrick told Breitbart’s Aaron Klein that when she tried to tell NBC about Hillary’s subsequent threat to her they cut her off “We aren’t interested in that “ she was told.

There are at least three other serious and credible charges that Bill Clinton viciously bit two other women in addition to Broaddrick ,Oxford coed Eileen Wellstone who told Oxford University security this in 1969. Bill was ejected from the Rhodes scholarship program over this incident, but falsely claimed he left Oxford because he has been accepted at Yale Law School. If fact he would go to Yale until a year later spending the year bumming around Europe. CIA veteran Cord Meyer claims in his biography that the Agency recruited Bill to spy on anti-Vietnam War groups that year.

Arkansas beauty queen Liz Ward Gracen said Bill attacked and bit her around the year 1982. After being plied with a acting job in Hollywood by Clinton crony Harry Thomasson, Ward Gracen changed her tune saying publicly that her sex with Bill Clinton was consensual, but privately she told her close friend Judy Stokes that Bill Clinton had raped her and that the sex was rough and most definitely not consensual.

Judy Stokes told the Paula Jones investigators in the late 1990s that based on what Liz had told her she was sure that Bill Clinton had raped and bitten Liz Ward Gracen. Stokes gave a sworn statement .

In addition to these three credible allegations against Bill Clinton, there is a fourth savage Bill Clinton sexual assault worth mentioning. Roger Morris in his book Partners in Power interviewed another woman who had been sexually terrorized by Bill:

“A young woman lawyer in Little Rock claimed that she was accosted by Clinton while he was attorney general and that when she recoiled he forced himself on her, biting and bruising her. Deeply affected by the assault, the woman decided to keep it all quiet for the sake of her own hard-won career and that of her husband. When the husband later saw Clinton at the 1980 Democratic Convention, he delivered a warning. ‘If you ever approach her,’ he told the governor, ‘I’ll kill you.’ Not even seeing fit to deny the incident, Bill Clinton sheepishly apologized and duly promised never to bother her again.”

Beverly Lambert, who was one of the investigators for Paula Jones, uncovered some of the details of what Bill Clinton did to the woman who author Roger Morris had interviewed. Beverly Lambert: “She offered Clinton a ride home. And once he got her alone in her car, he grabbed this woman and assaulted her. He did his trademark thing; exposed himself, asked her to ‘kiss it,’ and pushed her head down into his lap.”