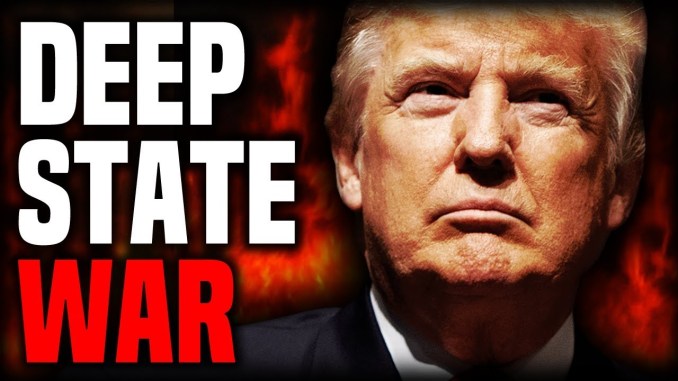 What follows is my humble attempt at drawing connections between deep threads in world events. The links I’ve provided are just tiny samples of the information that is available online. This isn’t meant to be a thoroughly-documented report, but one potential scenario that some might have overlooked in the current enthusiasm for our new president. Some of this is a bit dated, but it points to the general reaction of Trump as president. This is my family’s current “Planning Scenario Number One,” and the pieces of the puzzle that fit so far.

It seems, so far, that there’s a serious, well-funded move to overthrow the new Trump administration, and finally let the economy collapse that the PTB have been frantically propping up all these years:

Take a look at these articles:

Russians Thought Hillary and Neocons/Liberals Would Start a War

During the Presidential election, the Russians made it clear that they thought Hillary and the Neocons/Liberals would start a war with them within just a few months of her election.

If Russians then see Trump and his administration being overthrown (except the Deep State, of course), what are they going to conclude? Some leader in Russia is going to say, “Hey, it looks like we only have a few days to destroy the American nuclear/military capacity before these lunatics take over and use all that on us!” They cannot have lunatics with a finger on The Button. Then you get this.

And might not the opening act, the overture, of this scenario be an EMP, at least affecting part of the country, if not most? Maybe… It wouldn’t even have to be from the Russians. There’s a couple of North Korean satellites that orbit the U.S. several times a day and never transmit anything.

When U.S. Attacked What Will Libs/Commies/Dems Do

And if and when the U.S. is attacked by Russia/China/North Korea, what will the Libs/Commies/Democrats who have (re)captured the levers of power for themselves do? For one thing, the resulting government will no longer be the government of the “United States” vs conservative Christian patriot preppers. Instead, it will be an illegitimate, treasonous, hijacked, no-longer-a-Constitutional-Republic monstrosity that can no longer claim any loyalty from any of us. These leaders will likely double down on scapegoating us, and the country will come apart at the seams. “Civil War” won’t even begin to describe it. They’ll be those with an attitude like this.

Our country could look a whole lot like what David Wilkerson, A.A. Allen, Henry Gruver, and Dumitru Duduman prophesied years ago (for all their oddness and personal spin on what God might actually have shown them). For example:

Why mention “prophets” at all? Yes, I know it makes me sound like just another kook. (There might be some truth there…

But there is a coherent kernel of warning that these messages share.)

We could have come to this scenario just by watching the unfolding global drama. We didn’t even need a “prophet” to tell us this was a real possibility. Yet there it is. Maybe, it will help us take seriously a potential worst-case scenario?

Citizens Turning Against Each Other

And if the Constitutional government of these United States goes down in flames, its citizens turning against each other like rabid animals, its military decimated or at least scattered, awash in famine and disease and conflict, what will the global response be? Well, for one, many nations of the world will be relieved, because they have come to view the U.S. as a threat to “world peace.”

And our addiction to overthrowing governments and interfering with other nations will finally be over.

The relieved nations of the world (UN), viewing a fallen United States, might be sad to see their best customer go (hmmm… reminiscent of a Bible verse you know about Babylon?), but they will also want to be certain we don’t accidentally revive and become a danger to their plans again, right? Will we be a Zombie States of America (ZSA)?

So they’re going to post troops. Maybe we’ll even bless China for sending “humanitarian” aid to our West coast. (They have an investment to protect, and they want our natural resources!) Makes sense, right? Additionally, as part of this scenario, they’ll go about subduing what’s left of the country’s government under a global government, à la the UN (or maybe even the Antichrist?). Well, I guess that depends on your eschatology. But if it looks like the shoe fits…

You know who would benefit from disabling our nation’s nuclear deterrent? Who benefits from wrecking our country (because they failed to hijack it in time)? It’s the New World Order / One World Government people. Because America was going to be an obstacle to their aspirations to power. Perhaps with America on its knees, they’ll finally achieve what they’ve been working toward for decades.