It seems as if everyone is angry these days, with conservatives disgusted by the tactics the liberal media and Democrat politicians by attempting to assassination the character of Justice Kavanaugh, in an attempt to prevent his confirmation to the Supreme Court, and liberals angry and vowing a “day of reckoning” for Republicans that supported him, but frankly Kavanaugh is simply the latest casualtyin a nearly two-year long liberal temper tantrum over the election of Donald Trump as President of the United States of America.

DEMOCRATS HAVE BECOME THE PARTY OF RAGE

What we have witnessed over the past few weeks is nothing short of dangerous and people need to understand that Democrats have become the party of rage.

This week it was Justice Kavanaugh, next week it will be something else, and over the previous nearly two years we have observed with each new outrage, the death threats against conservatives increase, the protests become more violent, the liberal anger and rage is growing exponentially.

For example….. does anyone remember conservatives threatening the lives of Democrat politicians and other liberals when BarackObama nominated and the Senate confirmed Sonia Sotomayor or Elena Kagan? Did conservatives unhappy with those choices march up to the Supreme Court doors, with crazed people literally trying to claw at a locked door, with others screaming,  pounding and chanting? Nope.

Look at the scene outside the Supreme Court on Saturday as Brett Kavanaugh was sworn in as Justice Kavanaugh.

That is just not normal behavior, it is a scary freak show, yet it has become the norm for liberals that have been incited to near insanity by the establishment media.

Conservatives are not the only people highlighting the large part the media has played in dividing the nation, as CNN and the liberal MSM were recently called out by  CNN’s former bureau chief Frank Sesno, who accurately accused the media these days of “unrelentingly negative” coverage of President Trump.

Sesno then went on to shred the media on their reportage of uncorroborated allegations against a Supreme Court nominee without vetting the accusers. (NewsBusters has the video and transcript)

Back to the point, what I am highlighting is the difference in the actions of liberal protesters during the Kavanaugh confirmation, to the actions by conservative counter protesters. 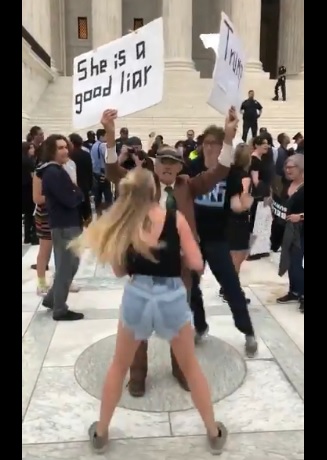 Another example: In the midst of the liberal chants and protesters during last week’s circus before the final Kavanaugh vote, an elderly conservative man, (we know he is conservative because of his signs) was quietly standing with his hands in the air holding signs, showing support for Kavanaugh, both signs had messages on both sides. Two younger Kavanaugh protesters started hopping around him, yelling chants in his face, before the female assaulted him by trying to knock his signs out of his hands.

Note- Having trouble getting the video to embed, but readers can watch it over at Daily Wire. This was also highlighted by James Woods on Twitter. – https://twitter.com/RealJamesWoods/status/1048953655657996288

We have already written about the unbelievable amount of death threats Republican Senators are receiving, to the point where Senator Rand Paul’s wife wrote an op-ed explaining she now sleeps with a loaded gun by her bed, and others have been threatening the life of Justice Kavanaugh, and not just “random” liberals venting on social media, but in one case a special education teacher tweeted “”So whose gonna take one for the team and kill Kavanaugh?”