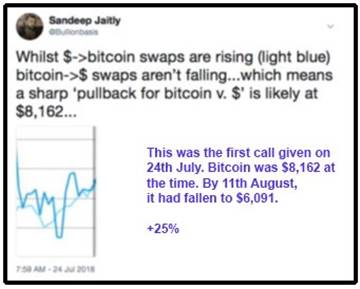 On January 3, 2009, embedded in bitcoin’s genesis blockchain was a cryptic reference by its mythical creator, Satoshi Nakamoto, to a second bailout for banks, a bailout so large, i.e. quantitative easing, it would drive the price of financial assets to record highs.

The Times 03/Jan/2009 Chancellor on brink of second bailout for banks.

The Times reported on January 3, 2009: …Alistair Darling has been forced to consider a second bailout for banks as the lending drought worsens. The Chancellor will decide within weeks whether to pump billions more into the economy as evidence mounts that the £37 billion part-nationalisation last year has failed to keep credit flowing.

A central bank implements quantitative easing by buying specified amounts of financial assets from commercial banks and other financial institutions, thus raising the prices of those financial assets and lowering their yield, while simultaneously increasing the money supply.

QE’s historic expansion of the money supply was so large, it triggered thecrackup boom, a monetary phenomena  predicted by Austrian economist Ludwig von Mises where continual credit creation leads to bubble valuations in all asset classes, ending in the complete breakdown of the monetary system, i.e. fiat money, and an economic depression.

A crack-up boom is the crash of the credit and monetary system due to continual credit expansion and price increases that cannot be sustained long-term. Often, banks will attempt to prevent a crack-up boom by halting credit expansion, which ends up backfiring and yielding the same results that the boom would have caused. Both scenarios result in an economic depression when the bubble finally bursts and the economic system crashes.

Many of bitcoin’s early adopters, familiar with fiat money’s accelerating problems, believed bitcoin would be fiat’s successor; and, while bitcoin could become the next coin of the realm (or some variation thereof), until then, bitcoin and all financial assets will have to survive the coming paroxysms of fiat money’s protracted demise.

Bitcoin, other cryptocurrencies, and all financial assets are caught in the powerful undertow of fiat money’s collapse, the crackup boom, the final stage of excessive credit creation that has created the greatest asset bubble in history.

Since the global financial crisis of 2008, all major economies have kept interest rates at or close to zero and maintained large fiscal deficits. A decade of massive, synchronised monetary and fiscal stimulus has led to the greatest asset bubble in history, to the tune of about US$100 trillion, nearly 1.5 times the world’s GDP.

Andy Xie, The global asset bubble will burst – the only question is when, and how bad it will be, January 2018

And cover your calls

Cause change is ‘a’ coming

That’s gonna bring down the walls

THE ABSENCE OF A GOLD (AND SILVER) BUBBLE

With asset valuations at all-time highs, gold and silver prices are still extremely low. The question is why and why now. The answer is found in a particularly insightful article, Prelude To A 2008 Event: Paper Gold Manipulation Intensifies, posted July 19, 2018 at www.investmentresearchdynamics.com.

The trading action in the paper gold markets of London and NY this week further convinces me that gold is being pushed down in price by the western Central Banks similar to the take-down in the paper price that occurred in 2008 [and 2011]. The motive is to prevent a soaring gold price from signaling to the markets that a big problem is percolating in the global economic and banking systems.

Once again, in the early morning the price of gold was slammed just after the London a.m. price Fix (3 a.m. EST) and again at the open of the Comex gold pit (8:20 a.m. EST)

This pattern has been persistent over the last two months. It’s not about gold being “pinned” to the SDR, as Jim Rickards is now promoting. And it’s not about some mystical gold peg to the yuan. It’s about western Central Bank desperation to keep the dollar alive in order to defer the inevitable collapse of the record level of dollar-denominated debt and the associated derivatives.

It’s no coincidence that Rickards has floated this theory about the gold price and the SDR recently. Rickards was rolled out several years ago to promote the idea that the SDR would be the next reserve currency. The Deep State knows the dollar’s life-span is limited. The U.S. dollar is 58% of the SDR, making the SDR the best replacement of the dollar which thereby enables the U.S. Deep State to maintain some semblance of global hegemony.

For the time being, gold is trading almost in perfect inverse correlation with the dollar. The dollar currently is rising vs. all fiat currencies. Therefore, of course it might look visually like gold and the yuan or gold and the yen are trading in tight correlation. But at the root it’s all about the dollar and the effort to prevent the dollar from collapsing.

…And has anyone checked gold lease rates lately? Currently the lease rate curve for gold and silver in London is inverted. In fact, lease rates gold from 3 months to a year are negative. Negative lease rates mean the Central Banks will pay bullion banks to lease gold and silver. Long-timers like me know that this means there’s an immediate and anticipated shortage of physical gold and silver available for delivery, where “delivery” means the metal is removed from the London vaults and shipped to the entitled buyer.

If you are monitoring the Comex Hong Kong kilo bar vaults, you are aware that the movement in and out of the vaults there suggests that metal is also tight in Hong Kong, which means it is likely tight in Shanghai.

The point here is that the paper price behavior of gold right now is not what it seems. I’d be more worried about the motives behind the take-down of the gold price using derivatives than I would about where the price of gold will be in 3-6 months. I’ve always said that the occurrence of events triggering the price of gold to soar will make life unpleasant for everyone.

Gold and silver are indicators of systemic monetary distress. That their price is actively being suppressed indicates how desperate central bankers are to keep investors invested in their paper edifice of credit and debt before it collapses.

On October 10, 2018, Sandeep Jaitly launched www.cryptocobasis.com, giving bitcoin holders the ability to increase their holdings of bitcoin whether the price of bitcoin is rising or falling by using the cobasis.

On August 11th, Sandeep tweeted that bitcoin swaps against dollars had stopped falling signaling a reversal of the previous downward trend and that betting on a rise should be considered. 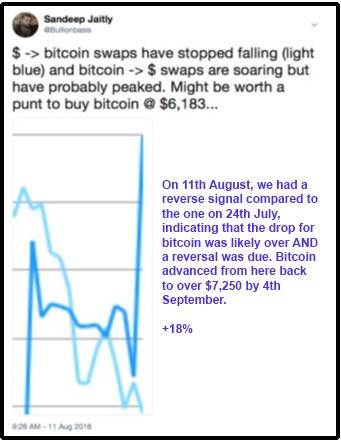 The use of the cobasis to profitably trade bitcoin is derived from Professor Antal E. Fekete’s  study of the basis. In 1971, Professor Fekete bought a seat on the Winnipeg Commodity Exchange to observe the first futures market in gold; and, there, learned about the basis, a trading tool utilized by commodity traders, the gold basis being of particular interest to the professor.

I have always felt that the gold basis was an anomaly. It certainly did not belong to the same category as the basis of agricultural commodities. It was not a bonus rewarding good husbandry. It was more like the Trojan Horse planted by a bankrupt government that wanted to take through deception what it couldn’t by force. I always looked at contango as bribe money, to induce people to take the promise instead of the real thing. It is remarkable and important that under the gold standard there was no need for bribes. People were happy to accept the promise at face value. The credibility of central bankers has in the meantime been reduced to a zero. They are the spinmasters of the “greatest fool” game. The greatest fool is the player who will hold the bag of worthless banknotes [fiat paper money] when the music stops. Gold futures trading has been introduced in order to make people believe that the possibility of hyperinflation has been eliminated for good.