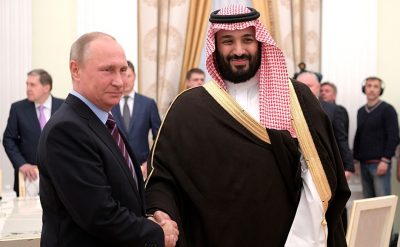 The response of the Trump administration and many U.S. politicians to Khashoggi’s disappearance is largely being guided by the military-industrial complex — in this case Lockheed Martin — but masquerading as a response motivated by “human rights.”

The disappearance and alleged murder of Saudi journalist and Washington Post columnist Jamal Khashoggi continues to strain relations between the United States and Saudi Arabia. On Saturday, President Donald Trump warned the Saudis of “severe punishment” if the Saudi government was found to have been responsible for the journalist’s alleged murder.

The Saudi government has vocally denied any involvement even though Khashoggi disappeared within the Saudi Consulate in Istanbul and responded to Trump’s threats by vowing an even “stronger” response if the Gulf monarchy is ultimately targeted by the United States. The exchange of threats caused Saudi stocks to sustain their biggest one-day loss since 2016 when trading opened and has brought the upcoming three-day Future Investment Initiative (FII) in Saudi Arabia much unwanted negative publicity.

However, there is considerable evidence pointing to the fact that the U.S.’ response to the Khashoggi affair is likely to be determined, not by any Saudi government responsibility for Khashoggi’s fate, but instead whether or not the Saudis choose to follow through with their promise to purchase the $15 billion U.S.-made THAAD missile system or it cheaper, Russia-made equivalent, the S-400. According to reports, the Saudis failed to meet the deadline for their planned THAAD purchase and had hinted in late September that they were planning to buy the S-400 from Russia instead.

While the U.S.’ response to the alleged murder of the Saudi journalist is being cast as a U.S. government effort to defend press freedom and finally hold the Saudi government to account for its long litany of human-rights abuses, there is every indication that the U.S. is not in fact seeking to punish the Saudis for their alleged role in Khashoggi’s apparent murder but instead to punish them forreneging on this $15 billion deal to U.S. weapons giant Lockheed Martin, which manufactures the THAAD system.

Khashoggi’s disappearance merely provided a convenient pretext for the U.S. to pressure the Saudis over abandoning the weapons deal by allowing the U.S. to frame its retaliation as a “human rights” issue. As a result, it seems likely that, if the Saudis move forward with the latter, the U.S. and the Trump administration  the Saudi government guilty of involvement in Khashoggi’s disappearance while, if they move forward with the former, the media frenzy and controversy surrounding the Saudi national will likely fizzle out and, with it, Trump’s threats of “severe punishment.”

Ultimately, the response of the U.S. political class to the Khashoggi affair is just the latest example of a U.S. government policy being motivated by the military-industrial complex but masquerading as a policy motivated by concern for “human rights.”

Why the sudden concern over the Saudi government’s atrocious human rights record?

As the Khashoggi saga has drawn on since the Saudi journalist disappeared earlier this month, some observers have noted that the corporate media and the U.S. government’s sudden preoccupation with Saudi Arabia’s human-rights record, particularly in regards to journalists. Indeed, just last Wednesday, Reporters Without Borders (RSF) announced that 15 Saudi journalists and bloggers had been arrested over the past year and noted that “in most cases, their arrests have never been officially confirmed and no official has ever said where they are being held or what they are charged with.”

In addition, Saudi Arabia has helped kill tens of thousands of Yemeni civilians in the war it is leading against that country, with most of those civilian casualties resulting from the Saudi-led coalition’s bombing campaign that routinely targets civilians. The Saudi-led coalition’s blockade of food and medicine into Yemen has also brought the country to the brink of famine, with nearly 18 million now at risk of starving to death — including over 5 million children, while thousands more are dying frompreventable diseases in the country.

While murdering a journalist by “hit squad” in a diplomatic compound on foreign soil — as is alleged to have Khashoggi’s fate — would certainly set a dangerous precedent, Saudi Arabia leading the genocide against the Yemeni people is arguably a much worse precedent.  However, little concern over the Saudis’ role in this atrocity in Yemen has been raised by those pushing for action to be taken against Saudi Arabia over Khashoggi’s “inhumane” fate. So, why the sudden concern?

The world is shocked about the reports of #JamalKhashoggi's death while
Saudi Arabia is responsible for the deaths of 100s of 1000s Yemenis, but it takes the death of 1 journalist to get world's attention?#Yemen. pic.twitter.com/cpGL1QiHSY

Despite it being a well-known fact that the Saudi government routinely imprisons journalists and activists and is leading a genocidal war against its southern neighbor, the Trump administration has now adopted a harsh tone towards the Saudis, with concerns over Khashoggi’s disappearance serving as the “official” excuse.