On Tuesday we detailed some of the ways big tech was ramping up their attacks on conservatives and Independent Media ahead of the midterm elections and while that is concerning, especially for those of that run Independent websites and those that read them, another very disturbing and dangerous trend has also increased in frequency……violent physical attacks and threats against conservatives.

From September 2015 up until September 10, 2018, there were 564 documented cases of violence, threats and harassment against conservatives and MAGA supporters, with 166 of them occurring in 2018 alone. As the media hype and incitement pushes forward, and Democratic politicians double down on “attacking” conservatives and encouraging mob formation to “confront” conservatives in public, the attacks and threats increase.

What is not included on Breitbart’s rap sheet of media approved violence and harassment, linked above, are the recent flurry of attacks.

In California, Republican candidate Rudy Peters, who is running against the Democrat incumbent Rep. Eric Swalwell, was approached and verbally attacked by Farzad Fazeli, who was cursing and making disparaging remarks about Republicans and president Trump, before he pulled out a switchblade and attacked Peters. Peters did manage to fend his attacker off and police later arrested Fazeli, charging him with felony assault, criminal threats, brandishing a weapon and possession of a switchblade knife.

According to The Sacremento Bee, Sgt. Ray Kelly, a spokesman for the Alameda County Sheriff’s Office said that Peters managed to fend off Fazeli by using a campaign sign to protect himself from being stabbed.

Kelly said Peters used a campaign sign to defend himself during the struggle.

“You’re dealing with a knife — a deadly weapon,” Kelly said. “Anything you can use, including a sign, would be a good option. It would provide you some level of protection.”

Eventually, Peters managed to bring Fazeli to the ground, Kelly said. He added that Peters was defending himself, and did not attack Fazeli.

Fazeli then fled the scene and “may have changed his clothes to disguise his identity,” Kelly said. But deputies were nearbyat the fair and detained him.

“We found a switchblade knife on his person,” Kelly said.

The San Francisco Chronicle has some direct quotes from the victim who describes the chilling event: “All of a sudden we hear someone screaming, “F— Trump, f— Trump!.” Peter then said the man appeared to be leaving but then “he stops and turns around and says, ‘I’ll show you,’ and runs at the booth.”

Peters said the man grabbed a coffee cup from the table and threw it at him, prompting Peters to come around the table and “grab him.” Peters said he threw him to the ground before the suspect hopped back up, reached into his pocket and grabbed the switchblade.

“He’s screaming, ‘I’m gonna kill you, motherf—er!’” Peters said. “He had the knife, but the blade wouldn’t shoot out.”

This is the type of behavior the media has been inciting with their constant negative, hostile coverage of not only president Trump but conservatives in general, predicting death at every turn if Republicans win elections, saying tens of thousands will die if (insert whatever the liberal media is against in any given week), and other such rhetoric, including Democratic politicians like Maxine “Mad Max” Waters who mockingly tells her supporters she threatens Trump supporters “all the time,” after previously encouraging liberals to form “crowds” and confront Trump administration officials at a “restaurant, in a department store, at a gasoline station.” 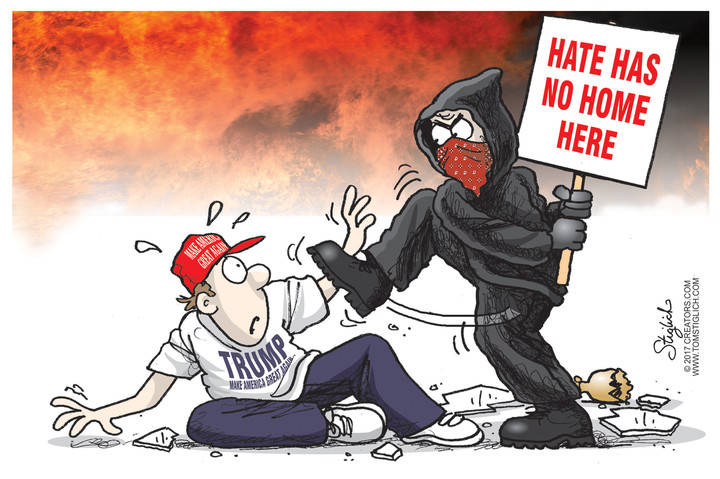 On the other side of the country in Washington DC, police are investigating a threat made by a Democratic Socialist, to commit a mass shooting at a MAGA event in the Trump International Hotel.

Police have responded to the Trump International Hotel in Washington DC after an anonymous threat to shoot up a meeting there supporting President Donald Trump.

The threat was made ahead of the planned Tuesday evening event by an anonymous Twitter account that supports the Democratic Socialists, a far-left political group.

‘I am coming with a gun and i expect to get numerous bloodstained MAGA hats as trophies,’ the account wrote, referencing the Trump campaign slogan ‘Make American Great Again’. 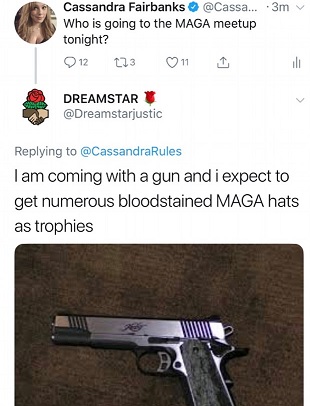 Over at the Drudge Report we see other examples of how violent the left has become, with a Wyoming GOP office intentionally set on fire just days after it opened. In another very disturbing story, we see that PJ Media writer and Fox News guest Denise McAllister, tweeted out her opinion about the recent “abortion hysteria,” and the threats against her from the unhinged far left, including rape and death threats, has led to her fearing for her life and that of her family, to the point to where she has had to go into hiding.

Representative Steve Scalise, who was almost killed in a mass assassination attempt in July 2017 against GOP congressmen, after a liberal shooter opened fire while they were at baseball practice, is calling out the left, stating “some on the left” are deliberately inciting violence and is calling for Democrats to denounce this type of violent behavior and to “stand up to this.”