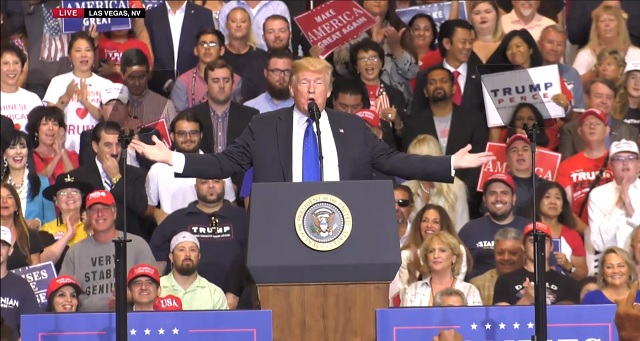 President Trump mocked the “fake news media” on Thursday at his rally in Las Vegas, saying “they’re still crying” over the results of the 2016 election.

From Mediaite:
“You remember when we had that great, great election, almost two years ago, can you believe?” he asked the crowd Thursday night from the podium, claiming there were “tears from the fake news media when it was obvious that we were going to win.”

[…] “Look at them, they’re still crying,” he said. “And let them cry. They don’t know what the hell happened, but it happened, and that’s why we are setting all-time records, that’s why we are doing so well, but we have to get out for the midterms.”

The whole rally was similarly hilarious and the house was packed! Watch it in its entirety above.

View of the line outside Las Vegas Convention Center of those waiting to get into the @realDonaldTrump #MAGA rally. (Photos sent to me from someone who prefers to remain anonymous) pic.twitter.com/0QOflZzPHL