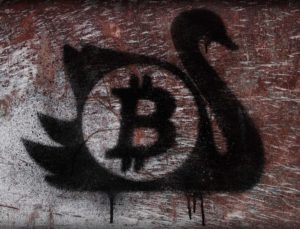 Don’t say things. What you are stands over you the while, and thunders so that I cannot hear what you say to the contrary.

This past Friday, PayPal informed Alex Jones’ Infowars it was severing ties with the website and that it had ten days to find an alternative payment processor. The news transported me back to that summer day a little over six years ago when I first acutely recognized the power and potential of Bitcoin, and then publicly decided to embrace it.

By August 2012, Wikileaks had been under a financial blockade for nearly two years. It was at this point I came across an article by Jon Matonis published in Forbes, detailing the predicament as well as the clear threat this posed to freedom of the press and free speech in general. He noted:

Following a massive release of secret U.S. diplomatic cables in November 2010, donations to WikiLeaks were blocked by Bank of America, VISA, MasterCard, PayPal and Western Union on December 7th, 2010. Although private companies certainly have a right to select which transactions to process or not, the political environment produced less than a fair and objective decision. It was coordinated pressure exerted in a politicized climate by the U.S. government and it won’t be the last time that we see this type of pressure.

He goes on to note that one way Wikileaks was able to continue receiving donations was through a little known protocol called Bitcoin (which by that point I had heard of, but hadn’t taken seriously enough to research). Recognizing Wikileaks was using Bitcoin to circumvent a financial blockade by conventional payment processors was my lightbulb moment. Wikileaks had angered all sorts of very powerful military-industrial-surveillance complex people through its historic leaks to the public, and it was clear humanity would be far worse off if such a meaningful information channel focused on elite wrong-doing was neutralized. In other words, a very powerful and pragmatic use case for Bitcoin had become apparent, and I immediately knew this technology had the potential to change the world.

Fast forward six years, and we find ourselves in a similar situation with the case of PayPal and Inforwars. The major difference between then and now is far more people are aware of how rotten and corrupt our current paradigm is. Donald Trump’s election and Bernie Sanders’ unexpectedly strong run in a rigged Democratic primary really shook the neoliberal/neocon establishment to its core. The status quo response has been as pathetic as it’s been extraordinary, with the hysteria so completely off the wall I sometimes wonder if the whole Russia-Trump collusion narrative was invented and propagated for the sole purpose of promoting a cultural acceptance of censorship.

If so, it’s worked spectacularly well in some respects. Although there’s been considerable pushback regarding how dangerous it is to allow tech oligarchs (or anyone else for that matter) to decide what’s acceptable speech, there remains a large group of people so traumatized by the 2016 election they cheer as their perceived political enemies are deplatformed. The road to hell is in fact paved with craven stupidity and shortsightedness.

Though many of us like to take comfort in the fact free speech remains widely protected under the law in the U.S., thanks to the Constitution and landmark Supreme Court decisions, we need to accept the fact that many of our fellow citizens disagree and denigrate what’s rightly protected expression under the law as “free speech absolutism.” We need to be honest with ourselves and confront the harsh and depressing reality that many of our fellow citizens don’t actually believe in free speech at all; a point of view that manifests itself in the cultural imperialism of Silicon Valley and what Ken Wilber calls the “mean green meme.”

There are two crucial attack vectors being targeted when it comes to punishing the transgressions of American thought criminals; money and communications, and we need to understand that Alex Jones is our cultural guinea pig. The tech giants started by kneecapping his voice by simultaneously deplatforming his presence from many of today’s dominant communications platforms. Now PayPal’s moved in to make payments more difficult, thus threatening his ability to earn money. You don’t have to like anything Alex Jones does to see how dangerous this is. What’s being done to him can and will be to done to others deemed undesirable by Silicon Valley oligarchs should they get popular enough. What’s emerging is a playbook on how to exert pressure and encourage self-censorship in the digital age and you better pay attention.

Money and communication are fundamental to our experience as humans here on earth in the early 21st century. As such, these things must be as neutral and permissionless as possible. The moment you have human beings in charge of communication and money systems you introduce bias and corruption. This is particularly dangerous in our current stage of human development considering the extent to which power and wealth have become concentrated in so few hands globally. You can bet the farm this small group of people will do whatever it takes to preserve the gravy train that is our current paradigm, including using tools of communication and money to prevent those who want change from influencing the conversation. This isn’t theoretical, it’s happening right now and will surely escalate from here.

Which is precisely why the emergence and continued success of Bitcoin is so fundamentally important to understanding the best way to challenge the forces attempting to bully us into an acceptance of their worldview. Unlike PayPal, Bitcoin is permissionless. There’s no central party, management team or CEO who can decide to stop you from using Bitcoin, something completely distinct from the likes of Facebook, Twitter, YouTube, PayPal, etc. As such, we can clearly see the fundamental flaw of these platforms by comparison. Centralized money and communications platforms are ultimately not conducive to a free society, which we can clearly see now, especially with the recent suspension of James Woods from Twitter for the most trivial of reasons.

If you need someone's permission to use something, there's potential tyranny baked into the product.