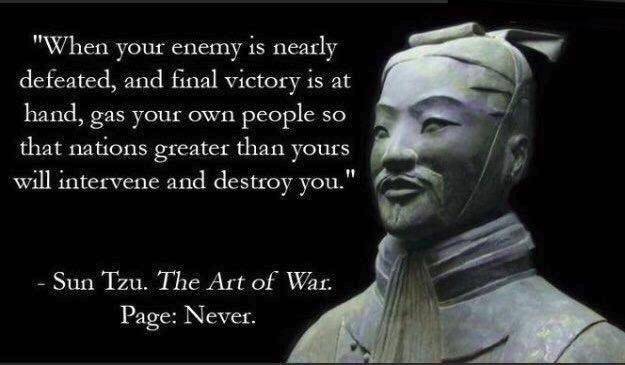 UN Ambassador and Clairvoyant Prognosticator of the Transmundane Nikki Haley has foreseen that, if there are any future chemical weapons attacks in the Syrian province of Idlib, it will most definitely be the Syrian government that is responsible and not the multiple terrorist factions in the area.

“If they want to continue to go the route of taking over Syria, they can do that,” said Nikki Haley at a UN press conference today, without explaining how a nation’s only recognized government can ‘take over’ the country it governs. “But they cannot do it with chemical weapons. They can’t do it assaulting their people. And we’re not gonna fall for it. If there are chemical weapons that are used, we know exactly who’s gonna use them.” 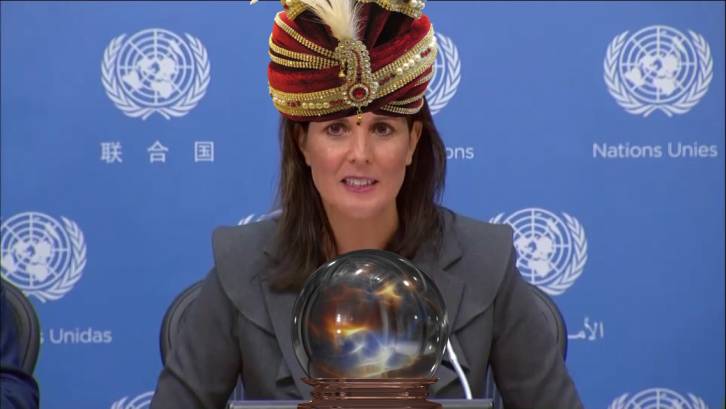 Nikki Haley on Syrian regime, just now: “If they want to continue to go the route of taking over Syria, they can do that, but they can not do it with chemical weapons.”

Haley was referring to the Syrian government’s impending push to complete its military campaign of recapturing its land from the terrorist factions and militias who, with extensive help from the US and its allies, have been holding communities hostage in a failed attempt to take over Syria. Her supernatural prophecy is just the latest in an increasingly bizarre string of claims being advanced by political figures and establishment media that the Assad government is planning to use chemical weapons to complete that campaign in Idlib.

Their narrative is that the Russian government’s warnings of a plot by the Al Qaeda-linked terrorist factions occupying the region to stage a chemical weapons attack and frame the Syrian government for it are actually just a preemptive “smoke screen” to allow them to get away with committing war crimes. When Haley said “we’re not gonna fall for it,” this is the ‘it’ she was referring to.

So let’s unpack that a bit. I’m going to propose two different possibilities to you, and you decide for yourself which one is the more likely event to occur in the future:

Possibility 1: The actual, literal terrorist factions occupying Idlib are on the cusp of defeat with nowhere to escape to. They know for a fact that the US and its allies have launched repeated attacks on the Syrian government following chemical weapons allegations without first waiting for an investigation into those allegations. They also know for a fact that multiple high level officials in the western alliance have stated they will carry out aggressive attacks against the Syrian government in retaliation for any perceived chemical weapons attacks, and, thanks to the public prognostications from Madame Haley’s crystal ball, they also know that the Syrian government has already been assigned blame for any such attack in advance. Knowing all of these things, with their backs against the wall with the absolute certainty that getting the western military alliance on their side is their last and only chance, they get their hands on some chemical weapons and kill some of the civilians they’ve captured.

Possibility 2: On the cusp of victory, the Assad government decides to do the one thing that risks a US-led regime change military intervention in order to accomplish the crucial strategic masterstroke of killing a few kids with chlorine or sarin in front of a bunch of White Helmets cameras.

While you are weighing those two options, consider for a moment the fact that the US and its allies have an extensive history of attempting to control who governs Syria, and indeed plotted to create a violent uprising exactly as it occurred in 2011. Not after the violence had already started, but years in advance.

This is not my opinion, and it is not a conspiracy theory. It is a known fact that you can verify for yourself:

You get the picture. If a man had documented his plans to murder his wife with an axe, and those plans were found after his wife turned up dead of axe wounds exactly as he’d planned them, and multiple people in the area said they’d heard him murdering her with an axe, the primary suspect in that case would not be the neighbor’s cat.