The nice thing about free to me money from any source is the recipients don’t have to change anything. Free money is the ultimate free-pass from consequence and adaptation: instead of having to make difficult trade-offs or suffer the consequences of profligacy, the recipients of free money are saved: they can continue on their merry way, ignoring the monumental dysfunction of their lifestyle.

This explains the appeal of Modern Monetary Theory (MMT), which holds that deficit spending is the “solution” to all our problems because governments can’t go broke–they can always emit whatever currency they need via printing or borrowing.

The problem with government deficit spending is it’s free money to the recipients: there are no feedback mechanisms to enforce any consequences for spending that’s wasteful, fraudulent or inefficient/ineffective.

Deficit spending simply enables the wasteful, corrupt, rewarding-insiders profiteering state-cartel kleptocracy to continue gorging on public spending.So what desperately needed efficiencies and improvements are imposed on the higher education cartel by handing the cartel another trillion dollars of public spending? None.

What desperately needed efficiencies and improvements are imposed on the healthcare cartel by handing the cartel trillions of dollars in publicly funded “Medicare for all”? None.

What desperately needed efficiencies and improvements are imposed on the national defense cartel by handing the cartel additional trillions of public spending? None.

What kind of sense does it make to encourage wasteful consumption on a finite planet with limited resources? The entire rationale of Modern Monetary Theory (MMT) is that the productive capacity of the economy isn’t being maxed out because we’re not consuming enough.

This is the insane ideology of endless growth on a finite planet. Consumption funded by free to me deficit spending has no mechanisms to recognize the wasteful, dysfunctional insanity of planned obsolescence and growth-for-growth’s-sake wasteful consumption.

Everybody supports spending trillions on infrastructure but has anyone noticed that the system for building infrastructure is completely broken in the U.S.? It takes a decade or two to rebuild a bridge (for example, the Bay Bridge connecting Oakland and San Francisco) and every project that is budgeted to cost $1 billion ends up costing $4 billion.

China would have cleared the political/permit process in weeks and rebuilt the Bay Bridge in six months. In the politically dysfunctional, over-regulated, insider-oligarchy of the U.S., the process takes 17 years, and costs quadruple. That is the acme of dysfunction on all levels.

Somebody benefits from all the deficit spending on cartels and all the financing of the debt: the top .1%. And why are you surprised? This is the only possible output of a state-cartel kleptocracy/oligarchy.

Deficit spending isn’t just public. Corporations and households have been deficit-spending as well. Total credit outstanding in the U.S. has far outpaced the expansion of GDP, the real economy. We’re borrowing more and getting less, overwhelming evidence that printing/borrowing money is generating less output.

Here’s federal debt. The government doesn’t “print” currency in our system, it borrows it into existence. The central state issues bonds and the central bank buys the bonds with newly created currency. Or pension funds, insurers, etc. buy the bonds, so “we owe it to ourselves.” Regardless, debt accrues interest and eventually this generates consequences. 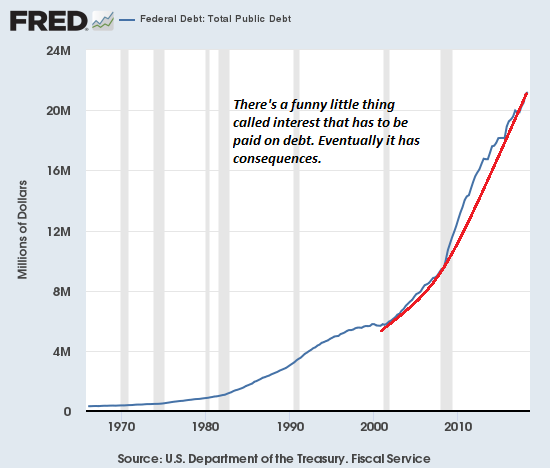 But not everyone owns debt, which is of course an asset. The benefits of deficit spending are as asymmetrical as all other spending/debt in our system.

Deficit spending is simply doing more of what’s failed. We have two examples to study: Venezuela, which has supported its free to me public welfare spending and its corrupt ruling elites by printing currency with abandon.

It’s simply not true that “governments can’t go broke because they can print money”: they can print currency but the currency has no purchasing power. I’ve read all sorts of excuses for Venezuela’s debasement of its currency, but the reality is: they printed as much as they needed to keep the status quo afloat and this profligate issuance of currency destroyed the purchasing power of their currency.